Pinehurst No. 8: Just you and the golf course 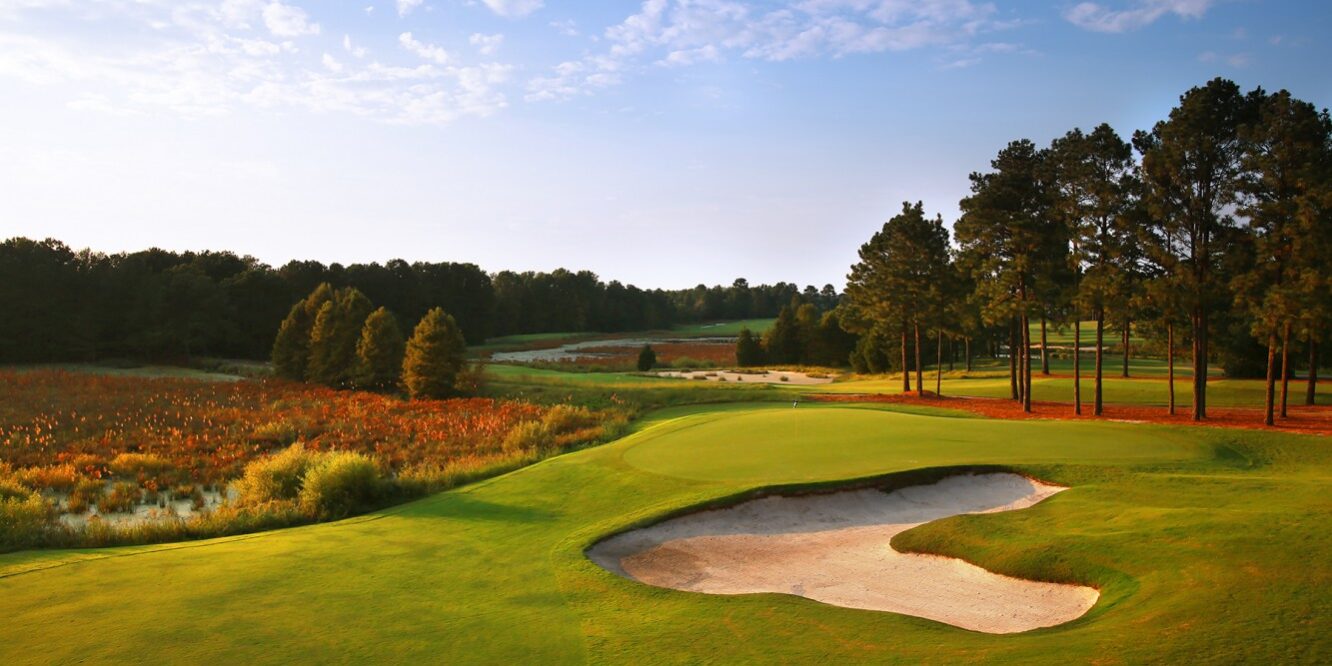 A lot has happened since Pinehurst Resort honored its 100th anniversary two decades ago with the opening of its eighth golf layout – also known as the Centennial Course.

Pinehurst brass Robert Dedman Sr. and Don Padgett Sr. are no longer with us, neither is golfing great Byron Nelson or gentle soul Gerald Ford, the former president of the United States – all who were on hand in April 1996 to hit ceremonial tee shots to kick off the grand celebration of the resort’s new golf course.

The view of the copper cupola from the top of the majestic century-old Carolina Hotel off into the distance is also now obscured by 20 years of tree growth, and four U.S. Opens have been staged on iconic Pinehurst No. 2 since ground was broken for No. 8 on the site of the old Pinehurst Gun Club shooting range.

And cell phones weren’t in everybody’s pockets then, either.

Why is that relevant?

Well, Hall of Fame golf architect Tom Fazio was waiting in line at the Masters in the mid 1990s for the opportunity to use a pay phone to call his office and check in to see if anything was up. Yes, there was indeed one message that peaked Fazio’s interest.

“My secretary said there is a call here from Mr. Dedman at Pinehurst and he needs to talk to you right away,” Fazio recalled. “Of course, I knew who Mr. Dedman was and I called him right back. Can you imagine getting a call about doing a new course at Pinehurst Country Club? It was a great thing.”

For Fazio, it was sort of a coming home party, too. One of the best golf course architects of his generation had constructed Pinehurst No. 6 as a young understudy to his uncle George Fazio in 1976. Tom Fazio would later redo Course No. 4, cementing his mark next to Donald Ross as a Pinehurst Resort architectural icon.

Dedman was a fan of Fazio’s work at Barton Creek in Texas and the two were friends.  In addition, Fazio was a buddy of Padgett and several others in Pinehurst, including famed amateur golfing great Harvie Ward, who was working with Fazio at the time on the construction of a private course at nearby Forest Creek Golf Club.

So the choice of Fazio to give Pinehurst Resort another signature course to complement No. 2 was as easy as a knife cutting through hot butter.

“It was kind of like old home week to me,” Fazio told Triad Golf Today. “And there I am living over in Hendersonville, living in the state of North Carolina. Talk about an ideal situation. I mean how much better could it be? It was perfect for me.”

“It was a huge deal back then,” said current Prestonwood Country Club general manager Matt Massei, who at the time was picked as No. 8’s first head professional/GM. “It was a was a great day when the team in Dallas recognized the importance of celebrating 100 years, but more importantly bringing in a name like Mr. Fazio to build a golf course. It was a testament to what it meant to the resort and to the Pinehurst area in general. To be a part of that, I don’t think I had a full grasp of that back 20 years ago when I was a young manager at the time. But looking back what an honor it was for me to be a part of that whole celebration.”

Fazio was a rising superstar in the industry at the time, and said he felt no extra pressure to design a course that was so symbolically important to the area.

“They gave me no parameters at all,” Fazio said. “They just said ‘you know what we want, you’ve done enough golf courses, you understand.’ We weren’t going to change the environment. It was Pinehurst, so what do people expect?  What do you think about? You don’t have to copy it, just make it natural. First of all you have gently rolling terrain, a sandy base soil and you have pine trees. It’s all the same environment. Now, the good thing about it was we had a lot of space, so we were able to create great variety.”

Few may remember that part of the master plan for the Centennial Course was 100 homesites around the golf course. They never materialized, and to this day the 420-acre tract of land is a natural golf canvas that appeals to the eye like none other at the resort.

“The one thing is No. 8 has its own identity,” Fazio said. “No. 2 is fabulous and it’s great and it is historic, and when you think of No. 2 you think of Donald Ross because it has been publicized so much, and you think of Payne Stewart standing there — all those things that have evolved so it’s kind of interesting to me. But having a piece of land that allowed us to create something distinct, something very different than No. 2 even though it has some settings and feelings related to No. 2, was nice and unique — yet still a part of the Pinehurst experience.”

Almost immediately, No. 8 became a championship setting, hosting the 1997 and 1998 PGA Club Professional Championships, with the winning score each year just 3-under-par on the 7,092-yard layout. Over the years, with Fazio completing a major redo of No. 4 in 2000 and its proximity to the core of the club, more tournaments were moved to that venue as a compliment to No. 2, and not No. 8, which was approximately an 8-minute drive from the main resort complex.

However, a switch to bermudagrass greens at No. 8 in 2013 has placed the popular resort course back on the map as it pertains to Pinehurst Resort championships. It will serve as the companion course to No. 2 for the 2019 U.S. Amateur Championship.

“It was always a 10 in my opinion and now it’s a 10 ½ because the contouring of the greens with firm bermudagrass greens are more of a challenge,” said Pinehurst Resort president Tom Pashley. “Take the 11th hole, that par-5 for example. I’ve never missed that hole with my wedge approach shot long until we changed the greens to bermudagrass. Now I get a little nervous on that hole where I never had to worry about that before. Even the first hole, hitting a downhill shot to that firm green, it has given me more butterflies and more nerves hitting shots into these firms greens than I ever felt. I appreciate the work and contouring of Fazio even more because with bentgrass greens it was never that intimidating.

“And it just gets better with age. I don’t think that’s the case with every golf course,” added Pashley. “But No. 8 has settled in and kudos to the Fazio team that built it for their great vision.”

The 238-yard eighth hole is widely considered one of the best par-3s in Pinehurst, while the uphill 18th hole – all 447 yards of it – play more like a 490-yard beast to a large, undulating green with a false front and a series of twists and turns that can fool even the best players.

Yes, there are some fabulous holes on No. 8, but the overall setting — with no homes hovering, with wetlands and lakes, creeks and streams, sandy and scrubby wastelands – make for a deserving recipient of a top 10 ranking among North Carolina’s elite courses.

“It is still one of my favorite places in the world,” Massei said. “I live an hour north of it now in Cary and I take my son (Jack) there quite a bit. Every time I approach the traffic circle and start making my way past Pinehurst No. 2 toward the club I get a warm feeling because it’s such a special place to my wife and my kids. It will be that way forever. I poured my heart and soul into that course for six years and worked with some great people there. It’s just a great property.”

“The main club has some positives – it has the history, it has a lot of action, a lot of moving parts – but if you want to get away from it all and sit in a rocking chair and enjoy the sounds of silence No. 8 is where you want to be,” added Pashley.