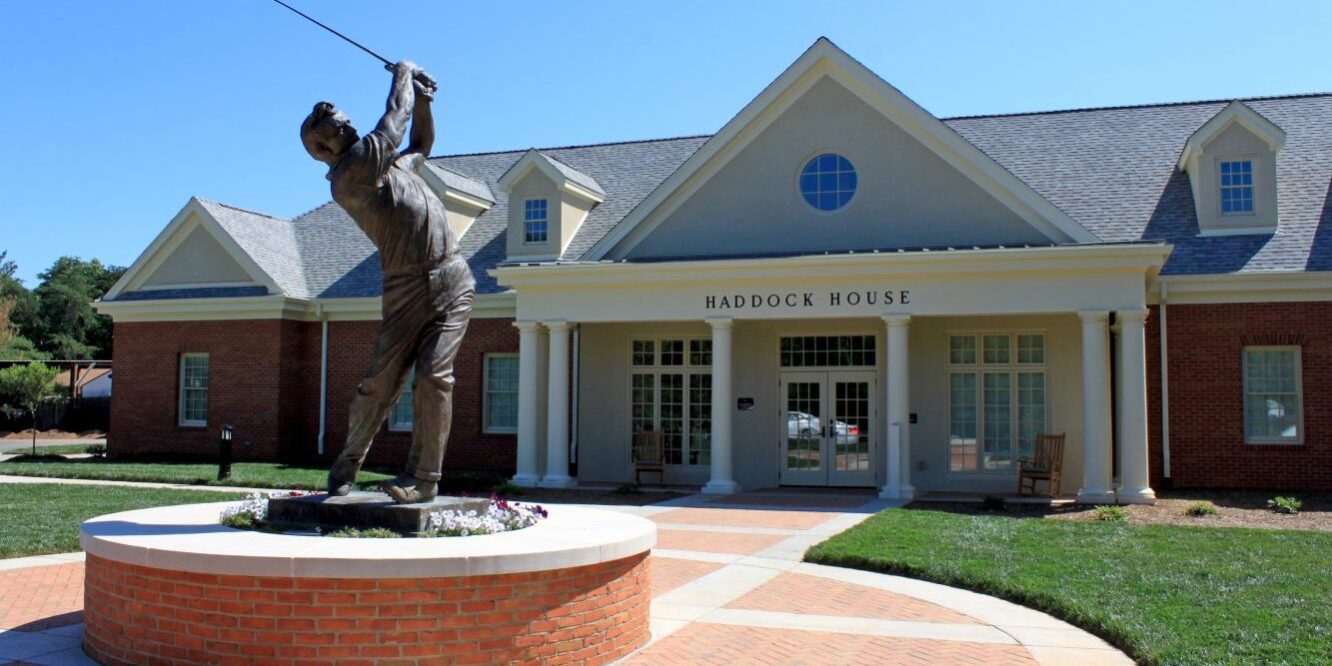 It’s impossible to miss it. The statue out front of the Arnold Palmer Golf Facility at Wake Forest University captures the famous Demon Deacon in a full, powerful follow-through that is classic Arnie.

But even The King has to share space with a legend. Wake Forest’s new Haddock House, which opened in May, is now the home for both the men’s and women’s golf teams. It encompasses all the modern technology and comforts of today’s world, while placing an emphasis on the school’s proud history.

“It’s a beautiful building, just like all the buildings on campus,” said former Wake Forest All-American and PGA Tour golfer Bill Haas. “As a player it makes you feel special you’re able to use this facility. When I go back it makes me proud to be an alum, to say ‘Hey, this is what we helped build.’ Hopefully the coaching staffs will see the results of having the Haddock House. It is going to help grow the tradition at Wake Forest.”

Upon entering the front door, one is given another dose of Palmer right off the bat, with an area to the right featuring his clubs, shoes and photos of his illustrious career. The three NCAA Championship men’s trophies sit in a glass display in the center of the room. In an adjoining wing are the ACC Championship trophies, along with an interactive touch screen TV. Similar to an electronic tablet, the interactive TV offers a stroll through the history of the Wake Forest golf programs, going all the way back to the 1950s. With a touch of the finger, guests can get lost in the past rosters of both teams (wow, I didn’t know Curtis Strange used to have dark hair!), a feature on Arnie, Coach Haddock and Old Town Club — the home course for both teams.

The women’s and men’s programs have their own locker rooms with individual lockers for each player complete with a name plate. There are offices for Jerry Haas, the men’s coach who just completed his 19th season, and for Dianne Dailey, who just finished her 28th season as the women’s coach.

The walls of the players’ lounge secure two 100-inch HD TV sets so the men and women can relax and watch all their favorite Wake Forest alums on the professional tours, or whatever reality show might be running. If the competitive juices are still flowing, both teams have access to a game room with table tennis and a pool table.

Rumor has it that an outside basketball court — complete with NBA and college 3-point lines — could be in the works. Assistant basketball coach Randolph Childress, an avid golfer frequently seen at the practice facility, would now have another reason to visit.

The idea is to have a place available for the student athletes to decompress from the pressures of academics, daily practice and matches.

With the arrival of summer and school out for the year, the offices and range are quiet. But, that doesn’t keep men’s associate head coach Dan Walters from the office, mainly so he can concern himself with the beginning of golf camps which will last throughout the summer.

Reflecting on the beauty and comfort of Haddock House, Walters thinks about his favorite part of the building. “That’s easy,” he said with a smile. “It’s the view outside my window every day.” He is referring to the 17 acres of “golfing bliss” that is the practice facility and the Dianne Dailey Learning Center, complete with heated inside hitting bays, TrackMan technology and a special putting room.

Walters realizes the importance of the name on the building. “Arnold and Coach Haddock are the ones who got all of this started. Obviously, for Mr. Palmer [which is the only statue on campus] to be displayed out front is incredibly special; and to have that lead you into the Haddock House seems fitting. Again, these two are the people responsible for getting the Wake Forest golf train moving in the right direction. Coach Haas and I catch ourselves every day coming into work and realize how lucky we are to be a part of such a wonderful tradition at Wake along with this new building. This facility, I believe, puts us right up there at the top of other programs.”

Recruiting top talent is another important aspect Walters believes will be positively affected by the new facility. Potential college golfers are now being looked at starting the year they enter high school. “We need to get them here and see what they have, and also we have to show them where this program is and where we are headed. This state-of-the-art building will be an important part of that process,” he said.

One specific feature the coaches like is all the players have to pass by their offices in order to get to the practice area. This gives them the opportunity to take advantage of the open door policy. “It is important to us that we can keep track on how they are doing and offer any help or suggestions if needed – about golf, school, or life in general,” Walters said.

While the Haddock House is operational, a formal opening is in the works for the fall. It will most likely coincide with the PGA Champions Tour schedule so that those players would be able to make it to Winston-Salem for the festivities; the same goes for the current PGA Tour alumni. Of course, the ultimate wish is Palmer’s attendance at the ceremony.

Haddock’s 1975 golf team has been called “the best college golf team ever” by Golf World  magazine.