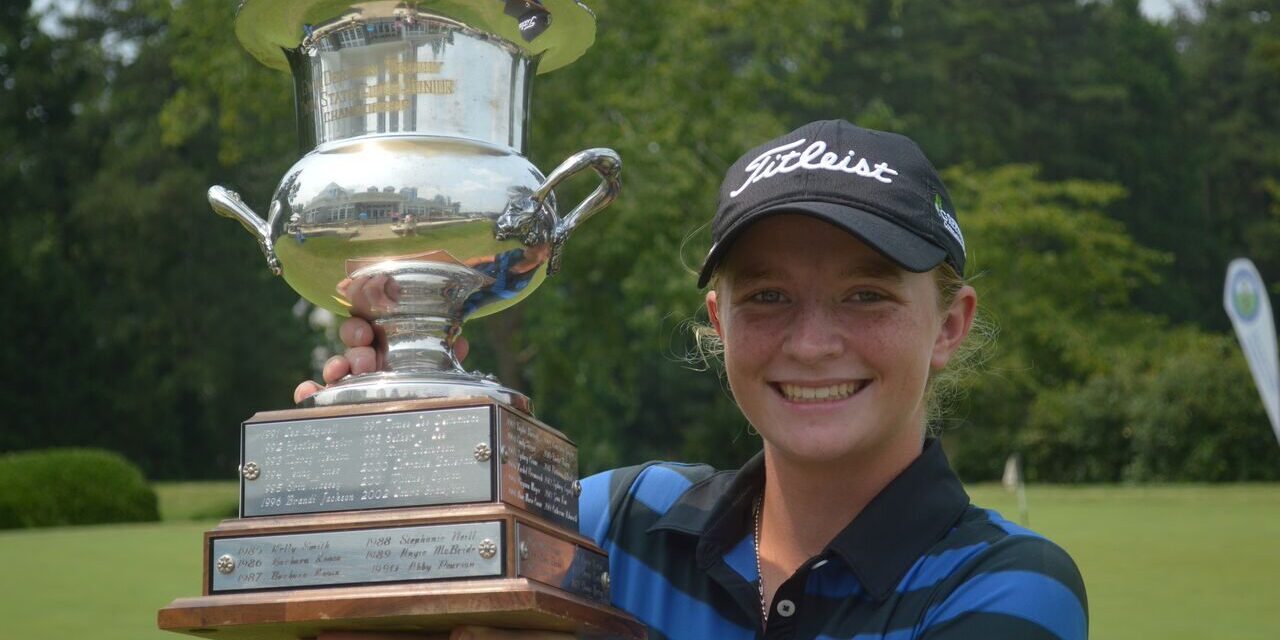 At 28 years old, Maggie Watts has grown up in a world with opportunities for females to experience the game of golf.

“I grew up in a time that women’s golf and junior girls golf was always included in the overall golf picture,” said Watts, the director of women’s golf with the Carolinas Golf Association. “But as little as 15-20 years ago, that really wasn’t the case.”

Once upon a time, women had to get a little more creative to find meaningful competition on the golf course. That included starting your own tournament, like a little event run out of Pinehurst called the Twin States Girls Championship.

In a letter to prospective players sent in 1968, then-president Paula Dawkins of the Twin-State Girls’ Junior Golf Association wrote about the group’s desire to “promote and conserve fellowship and friendly competition among the junior girl golfers who reside in North or South Carolina.” The letter went on to add that, during a planning meeting for the upcoming tournament, their photo was taken for “The Junior Golfer Magazine.” Dawkins wrote that this was a small matter, maybe, but it “reminded us that, although we may be the only junior girls interested in golf at our home clubs, there are many junior golfers in the nation.”

Gems like these letters and many other priceless memories are being discovered as the CGA prepares to celebrate the 50th anniversary of the Twin States Girls Championship. Watts is in charge of the tournament, but it has been former director Vicki DiSantis who has fueled the trip down memory lane and gotten a variety of former champions to come back for the festivities.

“We wanted to celebrate because it’s a big deal. So many golf tournaments don’t make it to 50 years,” Watts said. “A lot of the credit will and should go to Vicki DiSantis, who has done so much for junior golf in North Carolina and South Carolina. I feel pretty confident in saying without Vicki around it probably would not have been made into the really great event that we’re going to have.”

The 50th Twin States Girls takes place June 28-29 at The Windermere Club in Blythewood, S.C. The day before, the practice round will include this year’s participants as well as former champions who wish to play. That night, a special banquet will celebrate the 50-year history of the event.

The keynote speaker will be Debby Pinnell, who is coming all the way from San Antonio, Texas, to help celebrate the milestone. The former Debby Rhodes, from North Wilkesboro, won the first three Twin States from 1967-69 on her way to college golf and an eight-year LPGA career.

“I was honored that I was asked to speak,” Pinnell said. “I want to inspire the young girls who are playing golf now and keep them in the game. I would have just loved living in this age that they’re living in, with all these opportunities to compete.”

Pinnell was a three-sport star who enjoyed golf as her “summer sport.” She remembered getting birdies on three of her first four holes in the first tournament, then surviving the excitement of the hot start – on a blazing hot day on Pinehurst No. 1 – to win what used to be a one-day event.

Pinnell and DiSantis actually knew each other from school – they both graduated from Wilkes Central – but were not close and did not have any junior golf experiences together: DiSantis didn’t start playing golf until after meeting her husband, but enjoyed learning of the connection with Rhodes when researching the tournament’s history.

During this explosive era of growth in junior golf, DiSantis saw participation reach a point that more than 100 girls entered the 2006 event. That’s when she realized, “I can’t run these tournaments out of the little office in my house,” and turned things over to the CGA. While no longer presiding over the events, DiSantis still attends them.

“I go every year to the tournament because it is special,” DiSantis said. “I’m excited about the anniversary because 50 years is a long time.”

That’s why so many past champions will be returning. Recent winners such as Victoria Allred (2011), former pros such as Brandi Jackson (1996), and N.C. State coach Page Marsh (1979, 1981-82) have made plans to attend the celebration. DiSantis said she tracked down every former champion – no small feat given how many no longer live in the Carolinas – and some 10-15 will be making the trip.

“I think it helps to make the girls today aware of the history of what it is they’re playing in,” DiSantis said of the celebration.

Marsh said she is looking forward to seeing old friends and also celebrating an event that was special to her entire family. Marsh’s mother, Linda, who helped run the Twin States for many years, passed away last year.

“She enabled junior golf for so many of us at the junior level for over a decade before she moved up to the USGA Women’s Committee and served women’s amateur golf at the national and international level,” Marsh said. “Vicki has done so much for junior girls golf.”

The Twin States was Marsh’s first junior victory. She remembered her entire family being there to see her, as well as her future golf coach at UNC, Dot Gunnells. Winning a tournament like the Twin States came about thanks to “a collective effort of so many people,” Marsh said, as well as learning and maturing on the course.

“To win, one has to learn so many things about the game and about oneself,” Marsh said. “I remember putting together so many of these small pieces of the puzzle on that last day. I remember I didn’t hit the ball particularly well, but I figured out I didn’t need to play the game well. It was about being in the moment and making the most of each ‘imperfect’ shot.”

Watts expects up to 70 girls to try to seize the moment at this year’s tournament. Kathleen Sumner, a rising senior from Charleston, S.C., won last year’s event with a 69-74–143, edging rising junior Gracyn Burgess of Lexington, S.C., by one shot.

From its humble beginnings in Pinehurst, into the hands of women like Kuhn and DiSantis, and then the CGA, the Twin States has become one of the crown jewels for junior girls in the Carolinas. Clearly, there is much to celebrate this year.