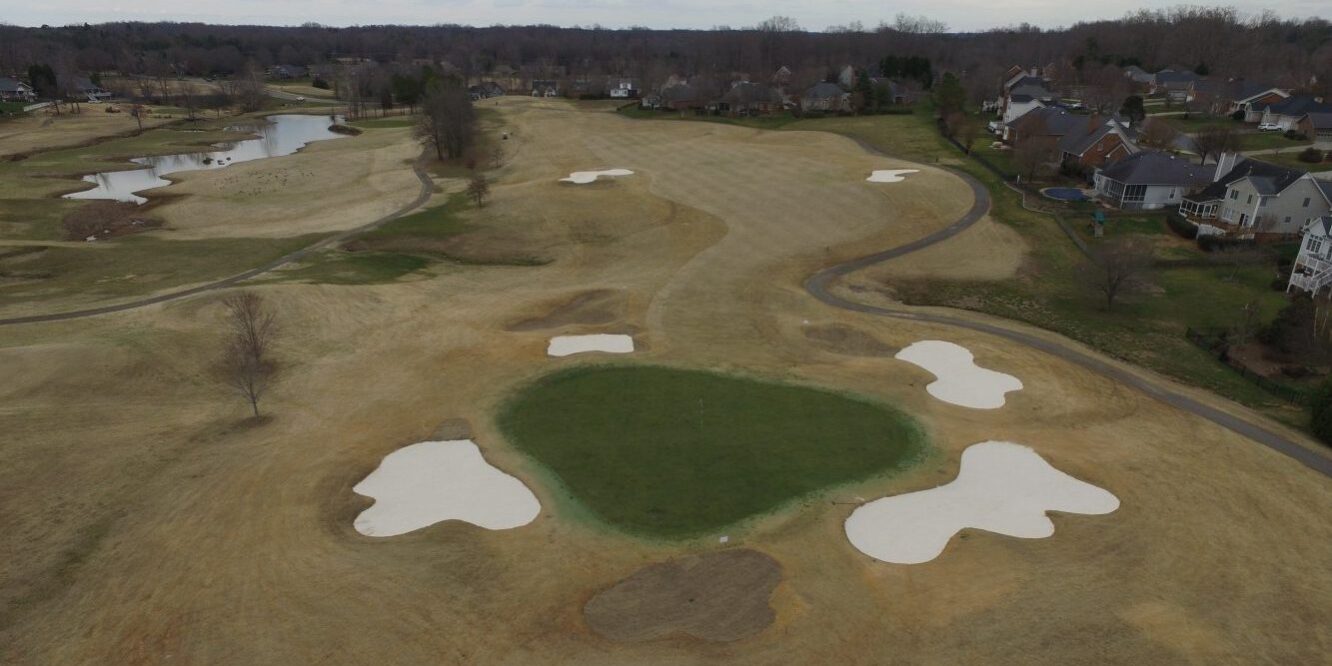 In a renovation expected to be complete by early March, Pinnacle Golf, which manages the Arnold Palmer design, is replacing the original sand with a white, G-Angle variety and converting many of the hazards’ steep lips to grass for easier maintenance and improved drainage.

The original bunkers, encroached upon by clay that caused ruts and created puddles, now stay free of standing water.

“Our big objective is to make it fun,” said Pinnacle’s Geoff Dail, a golf course superintendent who has worked on construction and renovation projects with architects such as Tom Fazio, Greg Norman and Davis Love III.  “We want our golf patrons to enjoy the golf course.”

Renovation of 40-something Oak Valley bunkers began in December.

Two bunkers on the par-4 fourth hole that sat beyond the landing area but well short of the green were taken out because they penalized only high handicappers.

“It won’t make a difference in play,” James said. “Those bunkers had become obsolete. We didn’t want to continue to penalize anyone who was already penalized by their shot.”

By decreasing the height of lips on the bunkers and replacing the area with grass, Dail said the changes not only eliminate the difficulty of bunker shots for high handicappers, but also flattened out lies within the hazard.

The flash of the sand stretching up toward the greens has been replaced with less flashy, more practical green complexes.

“We’ve eliminated a lot of the flash that would wash out in big storms,” Dail said.

Meanwhile, the depth of the G-Angle sand will be maintained at between 6 and 7 inches for optimal playability, Dail said.

As of early February, the project was about half completed, and had generated rave reviews, according to James, who praised Pinnacle’s work.

“Boy, have they done a good job,” James said. “Everyone who has played the course has been extremely excited about it.”

James said that over the years, clay had mixed with the sand, causing severe drainage problems common in the Triad area. The problems are compounded by organic elements from surrounding trees that also mix into bunkers over the years.

The increasing clay and organic debris at Oak Valley left many bunker shots unplayable after rainfall, frustrating players as their rounds were altered by the conditions.

It was hard for players hitting into unplayable bunkers to replicate the type of shot they should have faced. Though relief often gave players a break, the correct point of relief sometimes made the shot tougher, especially if it required a shot over the same hazard.

“The bunkers would just fill up with water, and you would have to take relief,” James said. “You could lose a ball in the bunker.”

“It’s one of the preferred sands in the industry,” he said.

Dail said the first renovations were made on Nos. 1 through 5 and 8 and 9. The January snowstorm and a few showers caused a 14-day delay.

“We’re hoping to have everything complete by the first of March,” James said.

The semi-private Oak Valley, which opened in 1995, owns one of the Triad’s finest public layouts. It’s also one of the most challenging.

In addition to providing easier maintenance and eliminating standing water in the sand, the new grassy areas offer a new variety of shots. For low-handicappers, chips and pitches from the grass will be more difficult with players unable to generate the same level of backspin they can on shots from sand.

For long chips covering a large portion of the putting surface, players can now forego a sand wedge for another iron in an attempt to play a running shot to the hole.

Meanwhile, high-handicappers should have an easier time pitching onto the green from the grassy area.

G-Angle sand has been the recent choice of several prominent clubs. Unlike typically round sand grains, G-Angle sand is “crushed” at the mine, creating the angular granuals that not only improve drainage, but prevent plugged lies.

Though bunker renovation may not seem like a big deal to many golfers, James said it should have a huge impact at Oak Valley.

“I think it will make the course harder for good players, not easier,” James said. “It’s just making a great golf course better.”