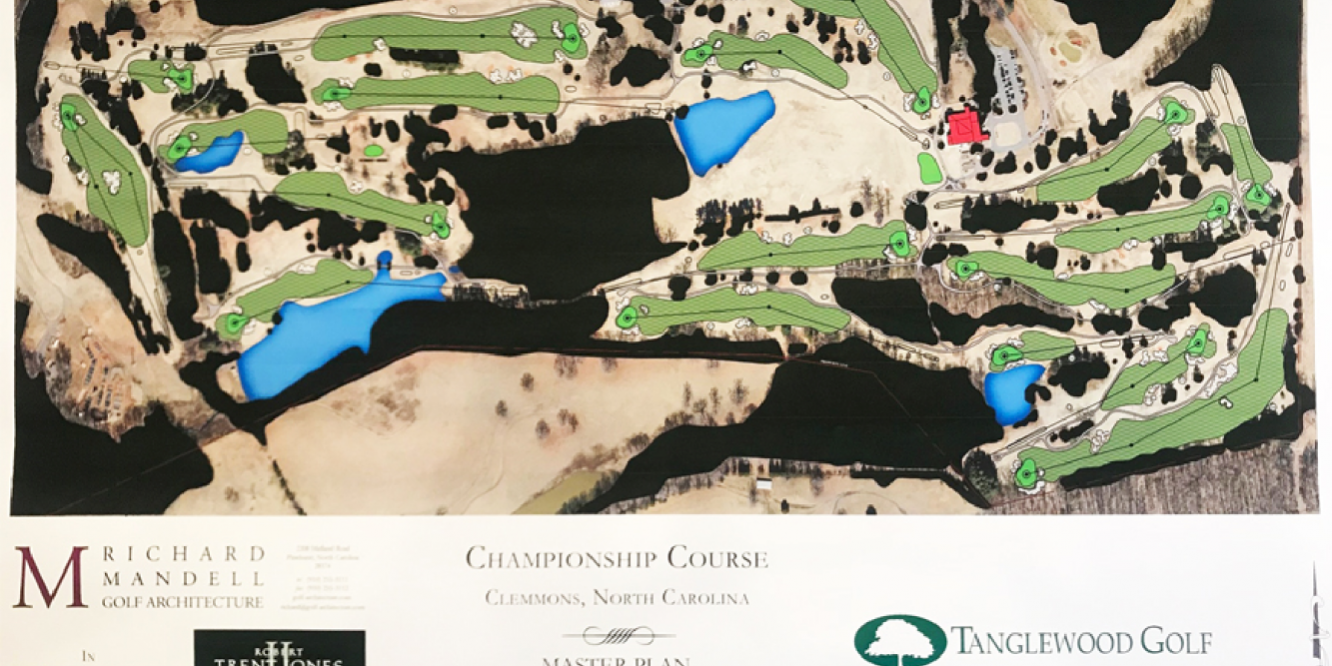 The course’s 99 bunkers will be reduced by 40 percent

Hugh Quinn is an officer with the Tanglewood Men’s Golf Association and loves playing the park’s courses as much as anyone.

But he’s the first to admit Tanglewood’s Championship Golf Course has reached the stage where it’s in dire need of some renovations.

Here’s an example Quinn gives to prove his point. He said several times over the past few years, when he and his golfing buddies were playing the Championship Course, they’d play strictly by the rules, play your ball where it lies as it lies.

The only time they might make an exception, Quinn said, is when a ball landed in a bunker. A ball that drifted into a bunker was as likely to wind up sitting in a hunk of mud or clay as it was to be found buried in sand.

And trying to stop a ball on a green from a clay lie is nearly impossible, Quinn said.

“There’ve been times we’ve played winter rules in the bunkers,” he said, laughing at the absurdity of it.

Tanglewood’s Championship Course, remembered by many as the home to the 1974 PGA Championship won by Lee Trevino, was long considered one of the finest tracts in the state and nation. Thanks to Forsyth County voters, Quinn and other golfers are hoping the layout in Clemmons will soon return to that rightful designation.

The course will close May 14 for a renovation that’s expected to be completed by Oct. 1. The Forsyth County Board of Commissioners in January awarded Wadsworth Golf Construction Co. of Plainfield, Ill., a $2.4 million contract for the work.

It’s the first of four payouts from a $15 million bond referendum for Forsyth County Parks and Recreation approved by voters in November 2016. The money for the parks and recreation work is part of a $430 million total package.

The other courses at Tanglewood Park– The Reynolds and the Par 3 – will remain open while work is done to the Championship Course.

“A lot of people are excited about the work,” Quinn said. “It’s going to bring a lot of excitement back to Tanglewood.”

A large portion of the upcoming renovations will involve work to the 99 bunkers that are a part of the Championship Course. New liners and sand will be installed, and drainage will be upgraded. The square footage of the bunkers will be reduced by about 40 percent.

“They’re going to be much more manageable in terms of size,” said Mike Wilcox, Tanglewood’s director of golf.

But the reworking of the bunkers isn’t the only thing planned as part of the upcoming renovations. The other major phase of the work involves converting the greens from bentgrass to Champion Bermudagrass. Some of the greens will be expanded along the way.

There will also be work done to the irrigation system, tree removal and improvements to the cart paths.

“We’re pumped up about it,” Wilcox said. “It’s going to be a huge shot in the arm for our course.”

He said the bunkers of the Championship Course have deteriorated to the point that many are little more than mud and clay. Drainage is slow or nonexistent, with puddles of water often sitting for days in the bunkers.

Wilcox said the fact the course must close while the work takes place isn’t ideal, but said the end result should make it all worthwhile.

“The way I look at it, for a little short-term pain this will be a long-term gain,” he said.

Wilcox said the Champion Bermudagrass is a type of grass to which numerous courses are converting. The grass, he said, is more durable than bentgrass and golfers seem to favor it.

Mike Anderson, director of Forsyth County Parks and Recreation, said when voters approved the bonds, work to the Championship Course was one of the first improvements recreation officials targeted.

“It was one of our priority projects,” he said.

Anderson said there hasn’t been extensive work done to the Championship Course in many years. The greens were last redone in 1997 and some other work was done on the course in 1989 for the Vantage Championship.

“It’s long overdue,” Anderson said. “The response we’re hearing from members and players is that people are very appreciative of the work we’re doing.”

Pinehurst-based golf course architect Richard Mandell was selected for the renovations to the Championship Course. He has been working for months on plans and will work closely with Wadsworth Golf on the actual project.

Mandell said he considers it an honor to be selected as architect, and said he’s trying to stay true to what he feels Robert Trent Jones Sr., the legendary designer responsible for the Championship Course, would have wanted.

“It just has a grand feeling to it,” Mandell said of the course. “It really got my heart to pumping. Being a part of history is important to me.”

Jones designed the Championship Course in the late 1950s, though he returned and redid the course in many ways prior to the ’74 PGA Championship. Mandell said that for the ’74 event, Jones “bulked up the course to make it more challenging.” Bunkers were added and renovations made to the greens.

Mandell said that while he was working on the redesign for the upcoming work, he was approached by numerous people who shared their memories of the ’74 PGA Championship, people who caddied at the event or attended with their fathers.

“They all asked that I restore the course to the way it was in 1974, which is what I intend to do,” Mandell said. “I told them, ‘I got you covered, I’m going to make sure we preserve it.’”

There’s a reason so many people have such fond memories of the ’74 PGA Championship. Trevino won by a single stroke over Jack Nicklaus. Sam Snead, who was 62, finished tied for third just three strokes behind Trevino. Many people still consider the tournament a big part of golf’s golden age.

Mandell said he’s worked on design projects for courses as far north as Minnesota and Cape Cod, Mass., and south to Florida. But he said he’s as excited about the work at Tanglewood as any project.

Mandell believes it is important to save as many old courses as possible, especially those designed by Jones.

“A lot are getting erased,” he said. “There’s no need to do that here. The bones are still there. It’s going to be great to preserve it.”