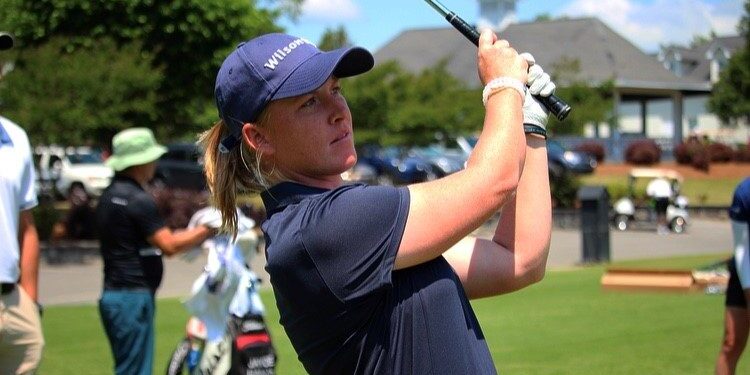 Think the life of a touring golf professional is glamorous?

Then, please, step back and consider a week in the life of Lori Beth Adams.

It was one of the few Symetra tournaments where Adams didn’t fare well, missing the cut. The Monday following the tournament, she flew home to North Carolina.

For a couple of days, she took a break from golf, putting her clubs aside and spending time with family members and friends.

Then it was back to the grind, Adams heading to nearby Indian Valley Golf Course to work on her game. The following Saturday, Adams climbed in her aged Honda Element, the one with 227,000 miles on its odometer, and set off alone on a 20-hour drive to Sioux Falls, S.D., site of the next tournament on the Symetra Tour.

It’s a scenario repeated week-after-week for Adams and other Symetra hopefuls who travel long distances for little money, chasing the dream of one day making it to the LPGA Tour.

“There are times you’re lonely, but that’s a part of it,” Adams said. “Golf’s a process; you have to enjoy the ups-and-downs. I’m just out here doing my best. And I’ve made a lot of friends along the way.”

The Symetra Tour is the LPGA Futures Tour, a stepping stone to the LPGA. The top 10 money winners on the Symetra Tour earn their LPGA playing cards. As of mid September, Adams was 27th on that list, still optimistic she can advance and earn her LPGA accreditation before the Symetra Tour ends in mid-October.

Such a move isn’t impossible, Adams insists. The annual tour includes 22 tournaments, but the upcoming six offer the tour’s largest purses. If she does well from here out, Adams said, she could be playing on the LPGA Tour next spring.

“To win a tournament would definitely do it,” she said of a way she might move into a top 10 slot. “A couple of top five or top two finishes would put me right there.”

Adams has done especially well in several tournaments, finishing second in the Island Resort Championship in Harris, Mich., in June and finishing as high as sixth on other occasions.

This is the second year Adams has competed full time on the Symetra Tour. She said her improvements from a year ago have been considerable.

“Last year, it was more like I was getting my feet wet,” she said. “There’s so much to learn.”

If a top 10 finish isn’t realized this year, Adams plans to attempt to make it to the LPGA next spring through qualifying school.

Adams got her start in golf when she was just 7 when her father, Steve, introduced her to the sport at Indian Valley, close to the family’s home in northern Alamance County. She played golf and several other sports until reaching high school when her father told her she needed to select one on which to concentrate.

For Adams, it was golf.

Asked if she ever wishes she’d chosen soccer instead, Adams laughed.

Adams suffered with mononucleosis as a sophomore in high school, for six weeks not able to so much as putt a ball, much less drive one. The illness affected the attention she received from college coaches.

But UNC Wilmington’s Cindy Ho eventually saw Adams play in a tournament in Durham and invited her to the campus for a visit. Adams said she’ll be forever grateful to Ho for taking a chance on her.

“I visited Wilmington and loved the campus,” she said. “I loved all four years I spent there.”

In 2013-14, her senior year, Adams capped a brilliant career by making her fourth-consecutive postseason appearance at the NCAA East Regional in Tallahassee, Fla.

She was the Colonial Athletic Association’s top player in 2012-13, collecting CAA player of the year honors and winding up second in the CAA Championship as the Seahawks finished runner-up. Adams earned an individual entry into the NCAA Central Regional in Norman, Okla., where she placed eighth overall.

One person who thinks Adams has what it takes to make it to the LPGA Tour is Jason Widener, who teaches at Mebane’s Mill Creek Golf Club. Widener has worked with Adams for eight years.

“She’s reached the stage where she really doesn’t have any weaknesses,” Widener said. “She’s always been able to bomb the ball off the tee and her short game has caught up to her long game. She’s getting more and more confident, she’s got all the tools.”

He said the progression he’s seen in Adams’ play has been remarkable.

“Each year she gets better,” Widener said.

Paul Hunt owns Burlington’s Hunt Golf. He has known Adams since she was about 12 and began competing in area youth tournaments. Hunt said he’s kept up with Adams and helped her get a deal with Wilson Staff to provide her clubs and other equipment.

He said as much as he admires Adams as a golfer, he admires her even more as a person.

“She’s a grinder, she’s worked for everything she’s got,” Hunt said.

Like Widener, Hunt said he’s impressed by Adams’ improvements, and feels she’s only going to continue getting better.

“She’s throwing darts now,” he said. “And she can flat crush a ball off the tee.”

Adams said she appreciates the kind words, and said she hopes to one day reward those who have invested so much in her success. She also hopes to one day earn enough to replace her aged Element, but for the time being, she’s remaining true to her roots.

“I’m a country girl,” Adams said. “I like to fish and ride a four-wheeler. When I’m home, that’s what I do. We’re a country family.”