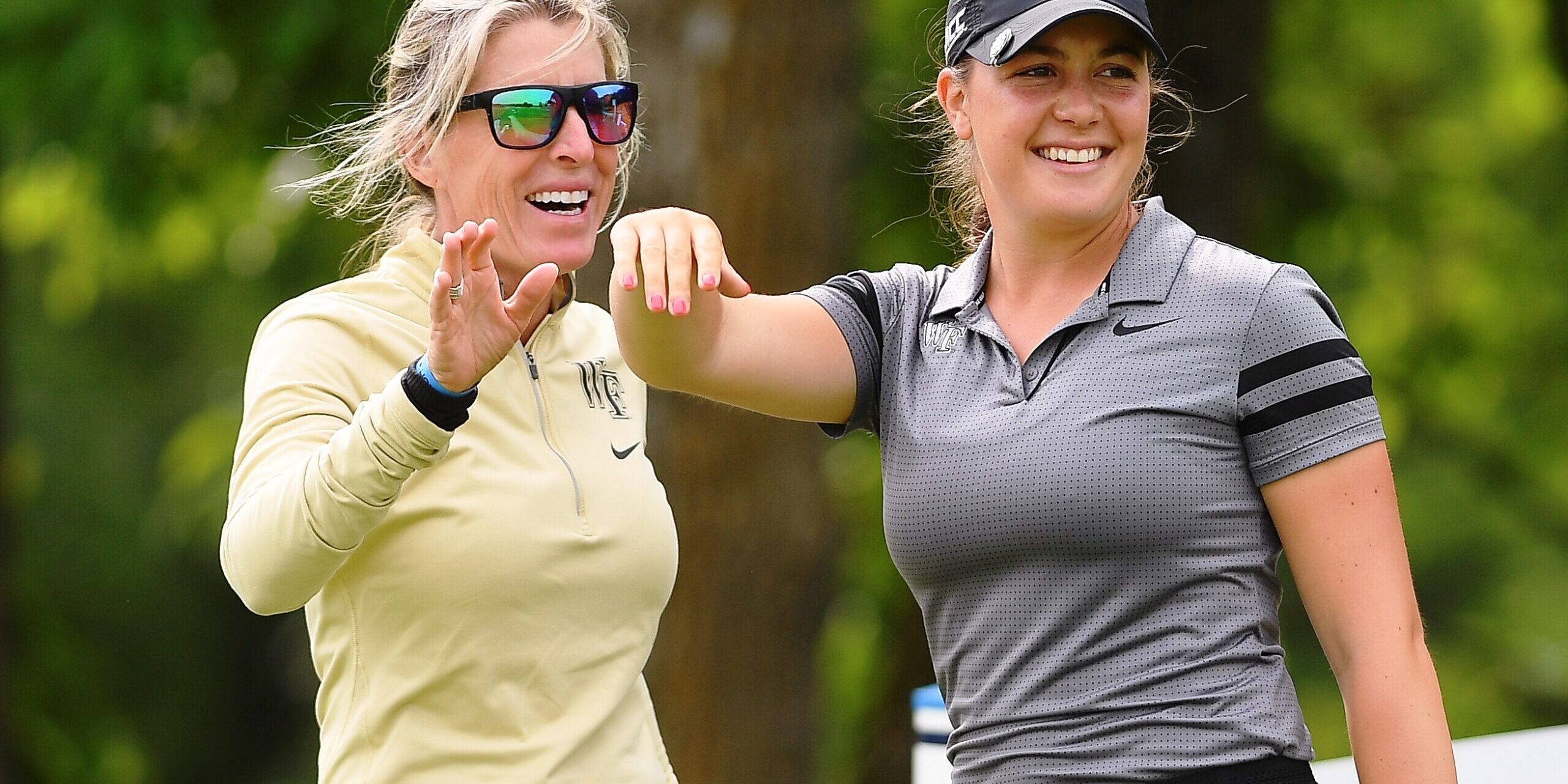 As a first-team All-American golfer at the University of North Carolina in the early 1990s and more recently head women’s golf coach at Virginia for more than a decade, Kim Lewellen knows a thing or two about ACC rivalries.

Lewellen is also accomplished at building winning collegiate programs, something she did at East Carolina and with the Cavaliers before taking over the Wake Forest program this season for longtime coaching legend Diane Dailey.

Lewellen and her new team experienced the ultimate ACC rivalry in mid May when the Demon Deacons and Duke Blue Devils advanced to face each other in NCAA Championship match play in the state of Arkansas. In the end, the outcome was razor thin, with Duke coming out on top on the final hole of the final match – three of which went to extra holes.

Although not winning the title, it was the highest finish in school history for Wake Forest, and signaled what may become a more intense rivalry with the seven-time national champion Blue Devils in the near future.

Lewellen grew up in Raleigh, competing on the boys’ golf teams at Millbrook High School aNCnd then powerhouse Broughton after she was transferred because of school redistricting. It made her a better and mentally tougher player, and she feels this year’s final push to the season and NCAA experience will harden her talented returning players, which includes All-American Emilia Migliaccio of Cary.

Lewellen was entrenched at Virginia, taking the Cavaliers to nine NCAA appearances in her 11 seasons, but her move to Wake Forest last summer was an easy decision, she said.

“It was just home for me, and Diane Dailey is one of my closest friends and has always been my mentor so she approached me with ‘hey, would you be interested in doing this?’” Lewellen said. “To follow such an icon in women’s golf was a great opportunity and she was there to help me in the transition — it just became an obvious good fit.”

However, for Lewellen it was a new team with new personalities. She remembers sitting down in her office – formally Dailey’s office – and looked around the room.

“I kept every one of her photos in the office, and the reason was I was had competed against so many of the people in those pictures and they were my friends, we played junior golf against each other and college golf together and even some professional golf together,” she said. “And once I had got into coaching I had recruited them so you learn to love all of these players in that process. I just looked at them and said to myself ‘I’m new at this school but I’m not new to the young ladies that had competed here.’ It wasn’t as unfamiliar as it could have been for me in a different circumstance because I was just transferring from one ACC to another ACC school.”

There was another key component to the move south to the state of North Carolina, Lewellen’s husband and kids would remain in Charlottesville, Va., until after the NCAA Championship, so the new coach had months and months of alone time – time she ended up spending with her new team members.

“I spent almost every moment of my free time with the team or with somebody from the team, going to dinner with them, or riding bikes around campus with them,” Lewellen said. “I was immediately thrown into their lives pretty frequently. They became my family that I didn’t have here. Once you get to know those young ladies and understand their personalities and you figure out what works best practice-wise, you watch and you observe, and you watch some more and observe some more, and figure out what parts of their games can get a little bit better, so as the year went on they continually got better and better and better, and the freshmen got older and older and more skilled.”

After starting slowly in the fall season, Lewellen lead the Demon Deacons to three wins and three second-place finishes over the final six events dating to March, including the ACC Championship at Sedgefield.

And while star Jennifer Kupcho stole most of the spotlight, Migliaccio emerged as one of the top-ranked college players in the nation, winning three times under the direction of Lewellen.

“She (Lewellen) feels like my best friend,” Migliaccio said.  “She is such an awesome person and coach. She’s so bubbly. We all talk about it, my teammates and I, when we reflect on the year. We didn’t know who was going to be coach after Dianne Dailey; she was so great. It was such a blessing that it was Kim because she’s really elevated our team. It’s been great.”

Lewellen works with her golfer’s swings only if they ask. Migliaccio asked.

“She started giving me a couple swing thoughts here and there and they were great,” the sophomore All-American said. “It’s been a really cool experience to see how my ball striking has improved and become so consistent.”

Lewellen recruited Migliaccio while coaching at Virginia and had watched her play a lot of junior golf. In addition, Lewellen competed against Migliaccio’s mother in the NCAA tournament in 1993.

“So we had a connection there immediately with the family,” Lewellen said. “Emilia is just a phenomenal player and an extremely hard worker. She is one of those players where there is never a day off and that shows in her game. She is a key component to this program. Emilia is going to be the heart of this team the next few years. Her work ethic is beyond anyone I‘ve ever seen.”

Despite all the great moments for the program over the last two months, Lewellen had to deal with the heartbreak of the team falling one or two shots short of winning the national championship.

Letizia Bagnoli, a freshman from Italy, ended up losing the final match when her second shot found the water.

“The players actually managed that situation,” Lewellen said. “Sure, you could say hypothetically that shot lost the tournament but it did not. There were so many strokes from other players and so many things that could have turned the corner, like making a putt here or there, so it never comes down to that last shot like it looked like on TV, but that’s the excitement of TV isn’t it, but it’s none of that. And that’s what so good about this team, they immediately got together, huddled and cried together, but they spent some time with each other and went through all the scenarios to make sure they all understood it’s a team effort whether you win or lose. Sometimes like in basketball that free throw shot doesn’t go in.

“Our team manages these things among themselves very well and as coaches you allow them to do that because they have worked well as a unit all year, and then if you need to fill in and say anything that leaves no doubt then you will do that. But they have all been there before, either competing individually or playing team sports. They know the deal.”

Bagnoli is just one of three international players in the starting lineup that also includes a golfer from China and Switzerland. Lewellen says she will continue to recruit along those lines, in additional to trying to find the best players in the states.

“The international aspect fits very well at Wake Forest,” said she. “My philosophy has always been to ask myself “What does the student body look like?’ and try to mirror that with your team.”

Lewellen will soon have more skin in the game at Wake Forest than just coaching the women’s golf team. Her son, a left-handed pitcher, has verbally committed to play baseball for the Demon Deacons in 2021.

“How exciting is that?” she said.