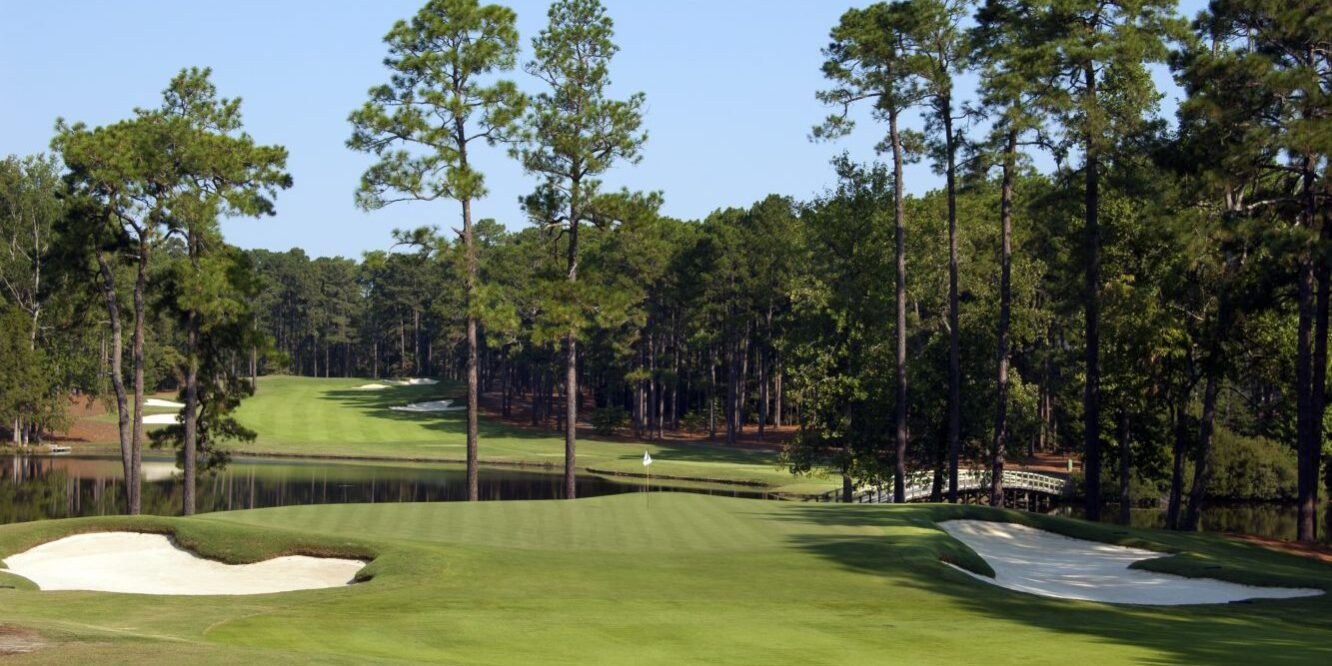 Under normal circumstances, it would have been a major downer for the re-opening of the Dogwood Course at the Country Club of North Carolina to transpire in the middle of Tropical Storm Hermine.

But with a major directive to transform the Ellis Maples classic into a firmer playing experience for the private membership and their guests, a day of rain was the perfect proving ground for Greensboro-based architect Kris Spence and CCNC director of golf Jeff Dotson — a chance to sort of take inventory if you will of the completed project.

“It rained the whole way around but I’ve never seen a golf course open in this kind of condition in my career. It was so well prepared and so ready to go,” Spence said of the $4.5 million renovation that included more than 30 acres of Zeon zoysia grass sod placed on the rolling fairways.

“By the end of the round our balls were still bouncing,” added Dotson. “We hadn’t seen that on the Dogwood Course in a long time. The No. 1 goal was to get the golf course drier, firmer and faster. It’s a great golf course and been recognized as such for a lot of years but it needed some updating. If Kris had not been able to get it drier and faster the whole project would have been a big disappointment.”

And with a series of water holes dotting most of the second part of the private Pinehurst course, the back nine nestled along Watson Lake is generally viewed as one of the most scenic golf experiences you’ll play — anywhere.

However, outside of some green work and some cosmetic changes by architect Arthur Hills in 1999, the Dogwood Course had been suffering from an outdated irrigation system, worn out bunkers, wet areas in various parts of the layout that started to influence the course’s intended strategy, and overgrown trees.

Spence, who has executed a number of renovations and restorations of Donald Ross and Maples courses across North Carolina, was one of three architects interviewed for the job back in 2014. Dotson said Spence’s presentation “blew us away” and the club’s board of directors also received glowing reviews from various members who are also members are other Tar Heel clubs Spence has worked on.

Spence’s idea of zoysia fairways, which has become popular at private clubs in Atlanta, was initially taken out of the budget. However, a second meeting with more than 125 CCNC members turned the tide.

“After that meeting was over a number of them came to us and said ‘we really think we should spend the extra money and get the zoysia. If we’re going to spend $4 million let’s spend an extra $500,000 and get the best we can get,”’ Dotson said. “It was a little bit of an eye-opener because any time you’re doing some big capital plan at a private club there is normally a lot of opposition. You are trying to make it acceptable to as many people as you can.”

The Dogwood Course is now the only 18 holes in the Sandhills with zoysia fairways, and just the fourth in the state, joining Biltmore Forest in Asheville, Carmel County Club in Charlotte and Greensboro Country Club’s Farm Course.

“What we were after was adding a real high definition to the tees and the fairways,” Spence said. “It was very difficult to see the fairway cuts and the way they moved across the property, so having the zoysia was a key component to really getting that wow factor and the pop back to the golf course.”

Spence also added some additional length with new tees for a championship layout that now measures more than 7,300 yards. But length was not a major goal of the project. Switching the greens to Champion bermudagrass, redoing all of the bunkers and some significant tree removal were also needed updates that Spence tackled to perfection.

“The bunkers were sort of a mixed bag of design from multiple architects – some original, some remodels,” Spence said. “There was not a lot of cohesiveness to the golf course when it came to the bunkers, so we brought them all together in a consistent design.

“This was not a restoration of an Ellis Maples course, but I was certainly trying to be respectful to his style — to me an esthetically appropriate design for Maples and that property,” Spence added. “We set the bunkers into the natural ridges and upslopes. I tried to strengthen the strategy and allow the bunkers to bite into the fairways and cross the direct lines from tee-to-green and gave the bunkers a lot more visibility. A lot of these bunkers had been dug well down into the ground and they were so deep that you couldn’t see them and you really couldn’t get in and out of them.”

Major design changes included a new green on the 4th hole, the green moved back on the 15th hole to open up a spectacular panoramic view, and more risk-reward drama to an 18th hole that has drawn some criticism over the years as not as strong a hole as some other on the final 9.

Not any more as Spence played with a water’s edge come and added additional bunkers.

“In general the golf course feels bigger and you have more room to play,” Dotson said. “And you’ve got that great definition between the zoysia fairways and bermudagrass rough. And the way Kris put the bunkers in the holes you stand on the tee and you can see movements in the fairways. The bunkers really kind of direct you down the hole now.”

The Dogwood Course remodeling project is one element of a $9.5 million plan for the 850-member club that also includes a new golf pro shop and halfway house facility, a new tennis pro shop and fitness center, and additional casual dining.

“I’ve kind of been saying that I strongly believe Kris made every hole better and in some cases significantly better, but in terms of the beauty he made a beautiful golf course even prettier,” Dotson said.

For Spence, the completion of the Dogwood Course is yet another home run in what has become quite a glowing resume over the last decade.

“I guess we’re going to find out,” Spence responded when asked about how his work at CCNC would influence his career. “I’ve been fortunate to work at a lot of premier clubs but I haven’t worked at one with quite the national profile as CCNC. It is clearly as good as or better than anything I’ve worked on.

“I am just thrilled to death with the quality and feel of the golf course,” he added. “I am sort of strange about this but I don’t look at that golf course as the one who designed it or did it, I look at it from a standpoint of ‘do I like this golf course as a golfer, would I want to play here every day, does this golf course have enough interest and variety to keep my attention and make me come out here and play the kind of shots that I want to play?’ And it does. The Dogwood Course just talks to you now, inviting you to come out and play. That’s what I’m proud of being able to accomplish.”