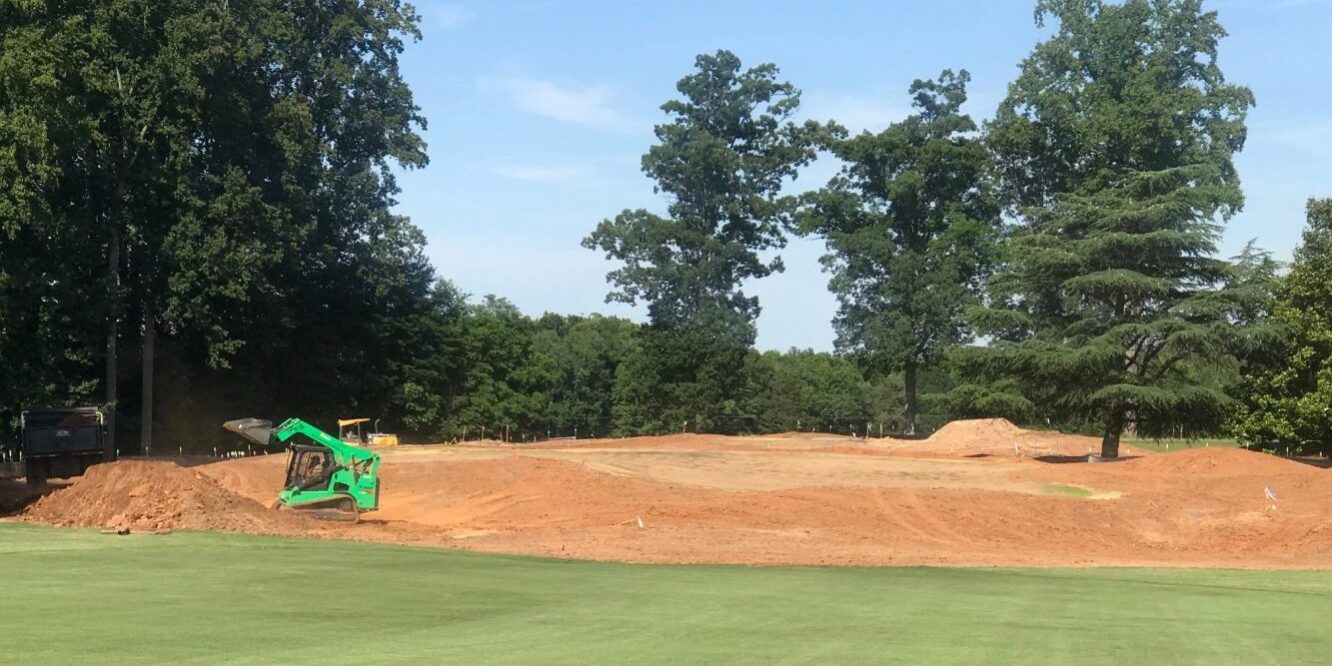 The renovation of Tanglewood’s Championship Golf Course is going well, with the facility on track to reopen around the first of October.

“We haven’t experienced any major setbacks,” said Mike Wilcox, Tanglewood’s director of golf. “Our goal was to reopen Oct. 1, and with any luck, we’re going to hit it, or at least come awfully close.”

The Championship Course closed May 14 for a major renovation that some say was years past due. The course’s 99 bunkers had become little more than large holes of mud and clay, washing badly when it rained and holding water for days following a storm.

New liners and sand are being installed in the bunkers, and their size is being reduced by about 40 percent. Other renovations happening during the closure include improvements to the cart paths and irrigation system, and the removal of multiple trees.

Also, as part of the renovations, the course’s greens are being converted from bentgrass to Champion Bermudagrass. Wilcox said sprigging for the greens’ new grass will take place in mid-July.

He said with exception of work to the greens, most of the improvements on the course’s front side are already finished. As of mid-June, improvements to five or six holes on the back side were also done.

“It’s going to be fantastic,” Wilcox said. “Our golfers seem really excited about what we’re doing.”

The Forsyth County Board of Commissioners in January awarded Wadsworth Golf Construction Co. of Plainfield, Ill., a $2.4 million contract for the work. It’s the first of four payouts from a $15 million bond referendum for Forsyth County Parks and Recreation approved by voters in November 2016.

The money for the parks and recreation work is part of a $430 million total bond package. Tanglewood’s other two courses – The Reynolds and the Par 3 – remain open while work is done to the Championship Course.

The course is an historic one, home to the 1974 PGA Championship where Lee Trevino beat Jack Nicklaus by a stroke. Sam Snead, who was 62 at the time, finished three strokes behind Trevino.

Pinehurst-based golf course architect Richard Mandell was selected to oversee the renovations to the Championship Course. He said he considers his selection an honor and is working to stay true to what he feels Robert Trent Jones Sr., the course’s legendary designer, would have wanted.

While the course was built in the late 1950s, Jones redid it in many ways prior to the ’74 PGA, beefing it up to give it more punch against the world’s greatest golfers. Mandell said he’s trying to return the course to the look it had for that PGA Championship.

He agreed with Wilcox that the renovations are proceeding well.

“If we can keep the rain away and get the grass planting done, we’ll be fine,” Mandell said. “Everything’s running smoothly.”