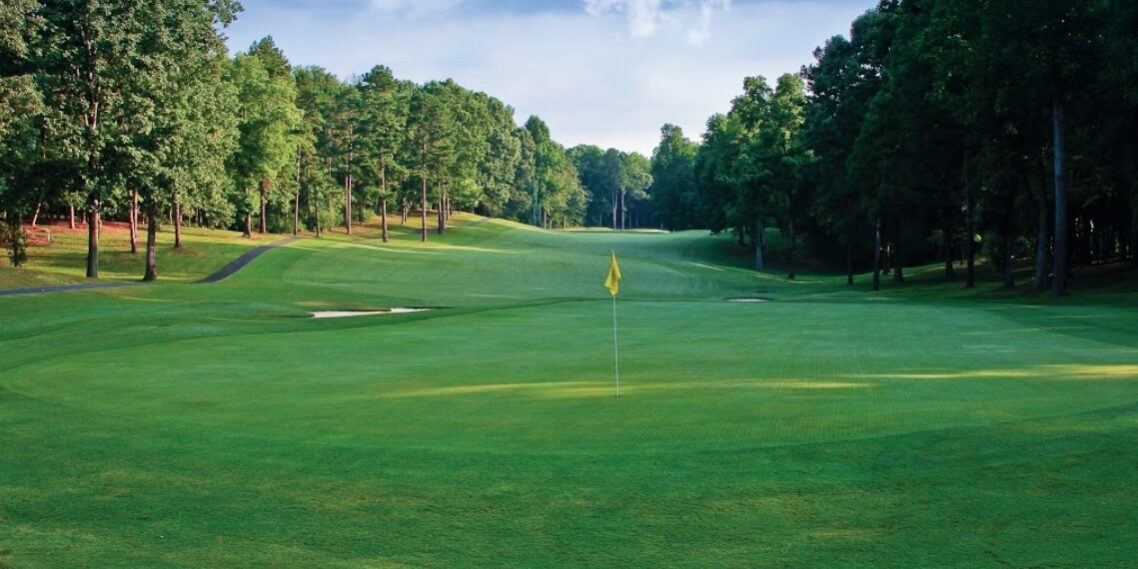 After a half century as a members-only club, the transition of Sapona Golf Swim and Tennis Club over the last year to a successful semi-private offering has been truly personal for general manager/director of golf Chad Newton and former club chairman Jason Barney.

Newton and Barney each have strong emotional ties to this Ellis Maples design nestled in the rolling hills of Davidson County outside of the City of Lexington, one of the state’s legendary BBQ haunts. Newton, a former president of the Carolinas PGA of America and winner of multiple major PGA awards, cut his teeth here 20 years ago as an assistant golf pro, while Barney logged dozens of rounds at Sapona while on the local high school golf team.

Each has been instrumental in moving Sapona forward after a rocky decade of ownership changes and scores of uncertainty. In 2019, Newton was hired to transition the club from entirely private to a mixture of public and member play while still operating swimming, tennis and clubhouse dining – amenities most semi-private   facilities don’t offer — in addition to creating a top-notch golf experience.

When he arrived at Sapona, Newton picked up a hammer and some nails, a paint brush – whatever he could to make a difference to get a mothballed clubhouse back in operating shape. Over the years, Newton has developed quite a reputation for being a turnaround artist.

“I’ve always been told I like a challenge,” said the 44-year-old Newton. “When I worked here previously I loved the people, and the people are the most important component of a club. And being from Winston-Salem, the geographic location is close to my heart. I care not only about the members but the local community and Davidson County.

“I knew that the local support would be intact, that we had a good nucleus of members who would do everything they could to make the club work; they just needed a little help or expertise in growing their public customer base and creating a first-class environment when they changed from a private club to a semi-private facility. I felt like with my experience — not only in the Carolinas section but the Triad area – that it was a good fit. I wanted to give something back because I worked here very early in my career and it helped shape everything I was able to accomplish throughout my career.”

Sure, there were plenty of improvements needed to the club, but Newton’s main task was creating harmony between the members of a private club and now the new target – the general golfing public.

“It can be a hard message to drive home after 51 years,” Newton said of the club opening for public play after being private for five decades. “The staff is in a partnership with the membership to do everything in our power to forge a positive relationship between all golfers in an effort to achieve sustained success. There are a lot of strategies many clubs have used over the years that will give you short-term success, but not sustained success. I prefer a long-range plan that will position us to be viable in the future.”

In order to attract new members to the semi-private club, Newton and the Sapona board came up with a unique offering. A promotional one-time fee of $1,000 was floated to 50 prospects for a 12-15 month period. It sold out and brought total membership to around 250. A second round of memberships is now being offered to the first 25 who sign up at a price of $1,500.

“We wanted to sell ‘experiences’ where people could come out and see everything Sapona has to offer,” Newton said. “It’s good exposure for the club, and then at the end of their window of opportunity to experience Sapona the hopes are we convert them to permanent members of the club. I think many will because there is so much value on what we charge for a membership. It is definitely the best bang for your buck of any facility I’ve been associated with.

“It takes a village to take a club from where we were at the start of 2019 to where it is today,” added Newton. “It was a combination of the staff and the membership, along with the local community support. We had a lot of members pitch in and help in some very crucial areas. We wouldn’t have achieved or attained the success we did without those members helping.”

The hall of fame architect Maples, who executed extensive work across North Carolina and in particular the Triad region, built his golf courses from high point-to-high point, taking advantage of the natural landscape, which he certainly accomplished in spades at Sapona.

The 416 acres that comprise Sapona was purchased in 1967 by Green Needles Corp. which was made up of Lexington business leaders, and course construction started that same year. The golf course was opened in 1968 with home construction beginning the following year. Maples was contracted by Green Needles because they felt his design philosophy would fit well with the tract of land purchased for the course.

“Sapona is a classic tree-lined layout, with a signature double green for holes 9 and 18 that plays directly to the clubhouse,” Barney said. “There isn’t a better golf view in the Triad area than sitting on the back patio and overlooking four holes. With large, undulating greens, sloped fairways and various lakes and ponds throughout the property, Sapona is one of the best layouts in the state.”

Barney, 39, is the Vice President of Business Development at CE Print Solutions, Inc. and has been a member at Sapona since 2008. The former club chairman and current board member says Sapona’s new focus has been directed toward establishing an affordable dues structure in order to attract younger members and families to ensure future viability of the club.

“Throughout 2019 and into 2020 I believe the implementation of this long-term growth strategy has been highly successful and has positioned the club for future membership growth and prosperity,” Barney said.

Rounds were up 30 percent in the first year from previous ownership highs, and are already trending to increase another 20 percent this year despite disruptions in tournament schedules because of COVID-19. Newton says the club’s tournament program has also nearly doubled in size in less than two years.

“Golfers love the playability of the golf course,” Newton said. “It is tough but fair. It is not an extremely lengthy course but is a beautiful layout, set back with tree-lined holes, lots of character and great topography.

“We like to create what I call ‘a fun, friendly, family environment,”’ Newton added. “That is No. 1 on our list. If it’s not a fun, friendly, family environment people will not return. We want every customer, whether it is a member, a guest of a member or public play, to leave here and feel like they were treated like they were at home and are welcomed back. I give every single customer my cell phone number if they have any needs, questions or concerns, or just inquiring about the club. I am available day or night; they can call me any time.”

The key message from Newton and Barney is “accessibility.”

“From the beginning (of the new ownership) we wanted to provide the public access to play the golf course and enjoy the club’s restaurant, and the response has been tremendous,” Barney said. “The public’s support of Sapona has helped the club get off to a solid financial start in year one, and many of those who enjoyed Sapona have now become club members. We hope to build on that success throughout 2020 and the early results have been impressive.”