All in the family

Keith Robertson has a hard time letting go of a distressed hemlock tree on the 4th hole. You see, it’s personal to him and his family.

Hemlock Golf Club in rural Stokes County was built by his father Orel Robertson after he purchased the property from his father, who secured the 80 or so acres following the Great Depression. Orel was in the construction business and had never played a hole of golf in his life, but was talked into designing the course in the late 1960s by one of his work hands.

“He did very well for what he had to work with and not knowing anything about the game,” Keith Robertson said about his father’s design. “If you would have seen this place before it was built you would have never thought my dad would have gotten a course in here. He took six months just to grade the front side.”

Opened in 1969, Hemlock Golf Club was named after that lone hemlock tree on No. 4, although there are hundreds of hemlocks across from the course that line the hillside and banks along the scenic Dan River, which provides a splendid view off in the distance while teeing off on the downhill 163-yard 4th hole.

“We’ve had some trees come crashing down on that hemlock tree and we’ve had to prune it, but I am saving two branches,” Keith Robertson says with a chuckle. “We’re hanging on to it. They wanted me to cut it down and I just wouldn’t do it.”

Hemlock Golf Club plays at just 5,692 yards from the tips, but with more than 100 feet of elevation change, at least four drivable par-4s that measure less than 300 yards each, and small greens, it’s undoubtedly one of central North Carolina’s most unique golfing experiences.

Brian Alley, the course’s former “cart boy” who is now the director of recreation at Primland Resort in Virginia, recalls the day 2002 North Carolina Amateur champ Derek Brown of Walnut Cove carded the course record of 54, or 16-under-par.

“It was a pretty big deal to have that N.C. amateur trophy at Hemlock for a summer,” Alley recalled. “Derek was getting the ball in the hole that day and he was a guy who just knew how to play the game of golf. We were playing a little match with some older guys and they were getting upset because they are just getting drubbed by him, so they stopped playing after nine holes. But I was playing well so I continued on with Derek. Well, I shot a 64 and got beat by 10 strokes. Can you believe that? That scorecard is still hanging on the wall.”

Orel Robertson passed away a few years ago, but Keith and his wife Cindy have kept the family golf tradition trucking along at a course that you can still get a burger for $3 and a beer for two bucks.

You’ll find Keith and his son and teenage grandson working on the course seven days a weeks, while Cindy manages the facility, along with running the snack bar.

The two say golfers from every state in the union except Alaska and Hawaii have teed it up at Hemlock over the years, as well as players from Canada, China, Japan and Saudi Arabia. And with the COVID-19 outbreak this summer, even more golfers are discovering the benefits of the sport as a recreational vehicle.

“Would you believe we’ve got walkers who have started coming back,” Cindy Robertson said. “They just love the hills, they love the hollows; they love the site, the scenery. One guy even brought his wife with him just to walk.”

The Robertsons say the course is on pace for its most rounds since the 1980s.

Keith Robertson says Hemlock Golf Club has undergone what he calls subtle changes over the years, including a new irrigation system that includes eight miles of pipe, 300 sprinkler heads and 100 valves.

“It’s an old-fashioned system where we have to turn on the valves by hand but we  finally have irrigation – all the fairways, all the tees, all the greens,” he said.

The course was originally built with one set of tees, but there are now multiple sets of tees for seniors, females and juniors. And some of the holes, including Nos. 1 and 9, have been lengthened over the years to add more of a challenge.

One not so subtle addition to the course can be seen on the third hole and a green complex ringed by a series of stacked rocks that sort of mirrors a prehistoric monument in England.

“The third hole was narrow and people were driving the green all the time so we wanted to cut a swale out in front to keep people from driving it as much, and when we started taking the sides down on the fairway we got into some rock,” Keith Robertson said.

“As I was grading with the dozer I didn’t know what to do with these rocks and I got to thinking that I’ll just stack these things,” he added “Kind of reminds you of Stonehenge, doesn’t it?”

Hemlock’s unique and short design, with two par-5s along the Dan River and a total of just three bunkers, is also priced right. You can walk nine holes during the week for just $11 and $14 on the weekends.

Alley recalls how his North Stokes prep golf team had a tremendous “homefield advantage” playing its matches at Hemlock.

“Hemlock is a course where if you know how to chip and putt, and know where you are hitting it you can shoot a 32, or you can shoot 52, too,” Alley said. “It taught us how to play golf starting at the hole and working our way out.

“If you want to hit hero shots you have to pull them off,” added Alley.

Cindy Robertson laughs when recalling her husband telling her if she marries him that she’s also marrying the golf course.

“That’s has certainly been true,” she said.

“It’s all challenging to me,” Keith Robertson added about the golf business. “But I’m the type that I’m not going to let it beat me. I am going to fix it to the best of my ability anytime I do anything.”

That includes trying to save that lone hemlock tree as long as possible. 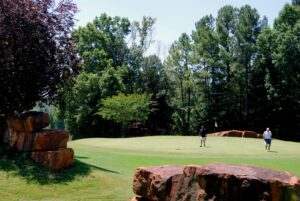