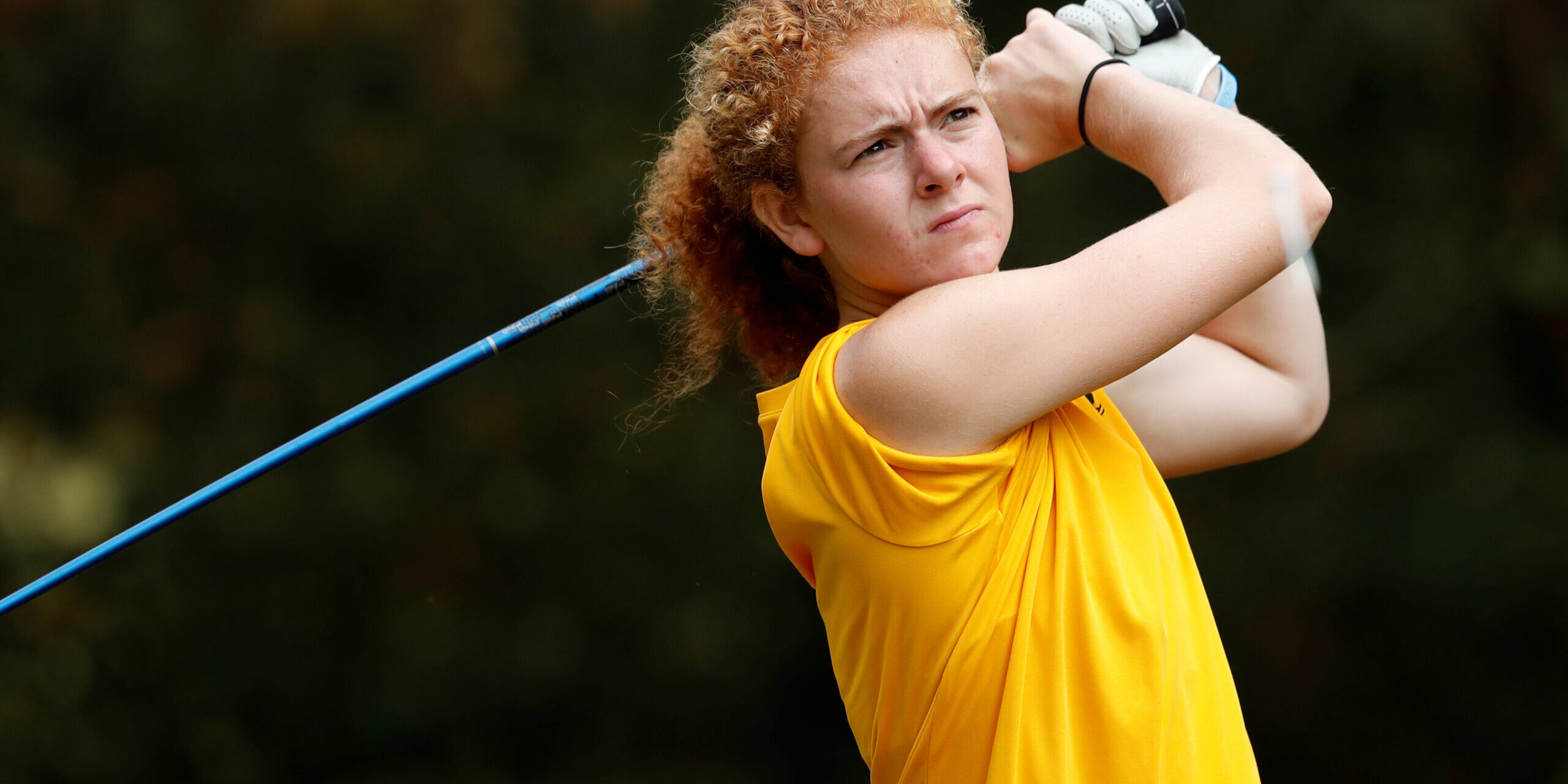 We all need a little bit of a push every now and then, but when that extra nudge comes via a professional golfer it can be a game changer.

That’s the case with Carrie Catherine Ganim, known affectionately to her family and friends as C.C.

Ganim was the co-captain of the Greensboro Page women’s golf team in 2015, but she left the game four years ago other than an occasional Father’s Day round with dad Charlie Ganim.

C.C., who also played prep basketball at Page, admits that she just wasn’t in love with the game of golf.

“Most parents get frustrated saying ‘I know you can do more with the game’ but she just didn’t have the desire,” her father said. “Page came in third at the state championships, but she put away her clubs as basketball started literally the next day.”

Ganim, who tied for 28th place in the 4-A state championships in 2015, headed off to Appalachian State, with playing college golf the furthest thing from her mind. All the lessons she logged with Greensboro-based instructor Kelly Phillips in middle and high school soon faded from memory.

That all changed last summer when Charlie couldn’t help himself as a proud father and pulled out his phone to show a video of C.C.’s golf swing to none other than PGA Tour player Harold Varner. Charlie and a few of his buddies were dining with Varner at a Charlotte restaurant as part of a First Tee fundraiser.

Varner, along with other pros, often get approached by parents who believe their child will be golf’s “next big thing.” However, when Varner grabbed the cell phone he focused more raising the volume than watching the video unfold.

He then asked Charlie if he could reach out to his daughter. The two played phone tag for a few weeks before connecting.

“He told her, ‘C.C., you have been born with a gift. I saw your swing and it’s just beautiful, but the ball coming off the club is a different sound than most amateurs. Don’t waste what you’ve been given,”’ Charlie Ganim said of Varner’s call to his daughter. “From that moment on she was all in, to the point that she can’t get enough, she wants to learn. She didn’t play for four years so she understands she has a lot to learn surrounding the strategy of the game and how to shape various shots and so on. But she is absolutely in love with the game.”

“No surprise my dad would show him a video of my swing,” C.C said of the Varner encounter. “He could tell my swing was good from the sound of the ball coming off the club. He was really supportive and encouraging. It was awesome he took the time to reach out to me, and he has done so occasionally since then. He told me to keep practicing and keep doing what I’m doing.”

C.C.’s boyfriend at the time also landed a job at the local driving range in Boone, so she was able to hit balls for free. That spurred on another thought.

“I was like ‘Oh I kind of miss this.’ So I went back to my swing coach in Greensboro thinking that if I was going to be hitting balls all summer I should know what I’m doing and hit them right,” C.C. said.

C.C. also connected with the ASU assistant golf coach, who is a friend, to play a 9-hole round. As they were playing, she encouraged C.C. to try to walk on to the women’s golf team.

“I played a little more and practiced and the head coach came out to watch me later in the summer. I was super nervous, but she let me try out for the team and I made it a few weeks later,” C.C. said.

C.C. returned to Greensboro to inform Phillips she would need his services again.

“Yes, I was surprised because it was kind of an abrupt ending to her golf career as she went off and did her thing in college, which was good for her because she figured out she did have a passion for golf,” Phillips said. “I wanted to make sure that she was coming back to compete for the right reasons, which obviously she has. It has been fun to watch.”

C.C.’s first round back on the course other than a Father’s Day round was an 89 at Elk River, but she has months later carded a career-low 69 at a tournament in South Carolina.

“No more 89s, thank God,” the Academic All-American said with a laugh.

But the reality of trying to compete beyond the college ranks remains a dream – for now. C.C. will be 23 in March, and has missed a valuable portion of prime competitive golfing years, and COVID-19 has also hindered additional tournament entries over the last six months.

“I want to see how it goes,” C.C. said of potentially trying to qualify for a professional circuit following her graduation this coming spring. “That’s a dream for anybody who plays sports, to try to make it to the pros, but right now I have a lot of work to do just at the level I’m at so I’m not trying to get ahead of myself. You have to get your short game down if you want to score and that’s where I need to work on a lot.”

At around 280 yards, C.C. is plenty long off the tee. Phillips agrees that his pupil needs to hone the finer points of the game.

“I don’t call it being behind but we’ve certainly discussed that she missed four years of prime golf,” Phillips said. “I phrase it like ‘we’ve got time to make up.’ C.C. is really gifted so we both think we can make up that time. It’s not like I’m having to re-teach her anything; we’ve got to keep doing what she does and keep cleaning it up.

“We’ve talked about pro golf. That’s a goal and a dream, but we’re also going to be realistic about it, we’re not going to do anything unless we know we’re prepared to go do that,” Phillips said. “Q-School would be ‘the answer’ and right now we’re working on ‘the equation.’ It’s kind of corny but we like to say: ‘How can I be better today?’ It’s very easy for youngsters to get really engrossed in the end result but it always goes back to how well did I prepare today for tomorrow.”

Golf next June for C.C. Ganim may mean more than a casual round with dad on Father’s Day.

“She absolutely has the talent and now I see the work ethic and the desire,” Charlie Ganim said of his daughter. “No, it’s not automatic, but I would like to see what she can do with golf at the next level.”

“I want her to get out and play as much as possible,” added Phillips. “She is in school and it’s getting colder in Boone but just making laps around the golf course is a good thing, and we’ve got to get in as many tournaments as possible so that she can get more comfortable in the uncomfortable. That’s the strength of the best players. It doesn’t really matter what the situation is, but the most difficult the situation is the better they become. You can talk about that as much as you want to but you have to go see it, do it, live it.”