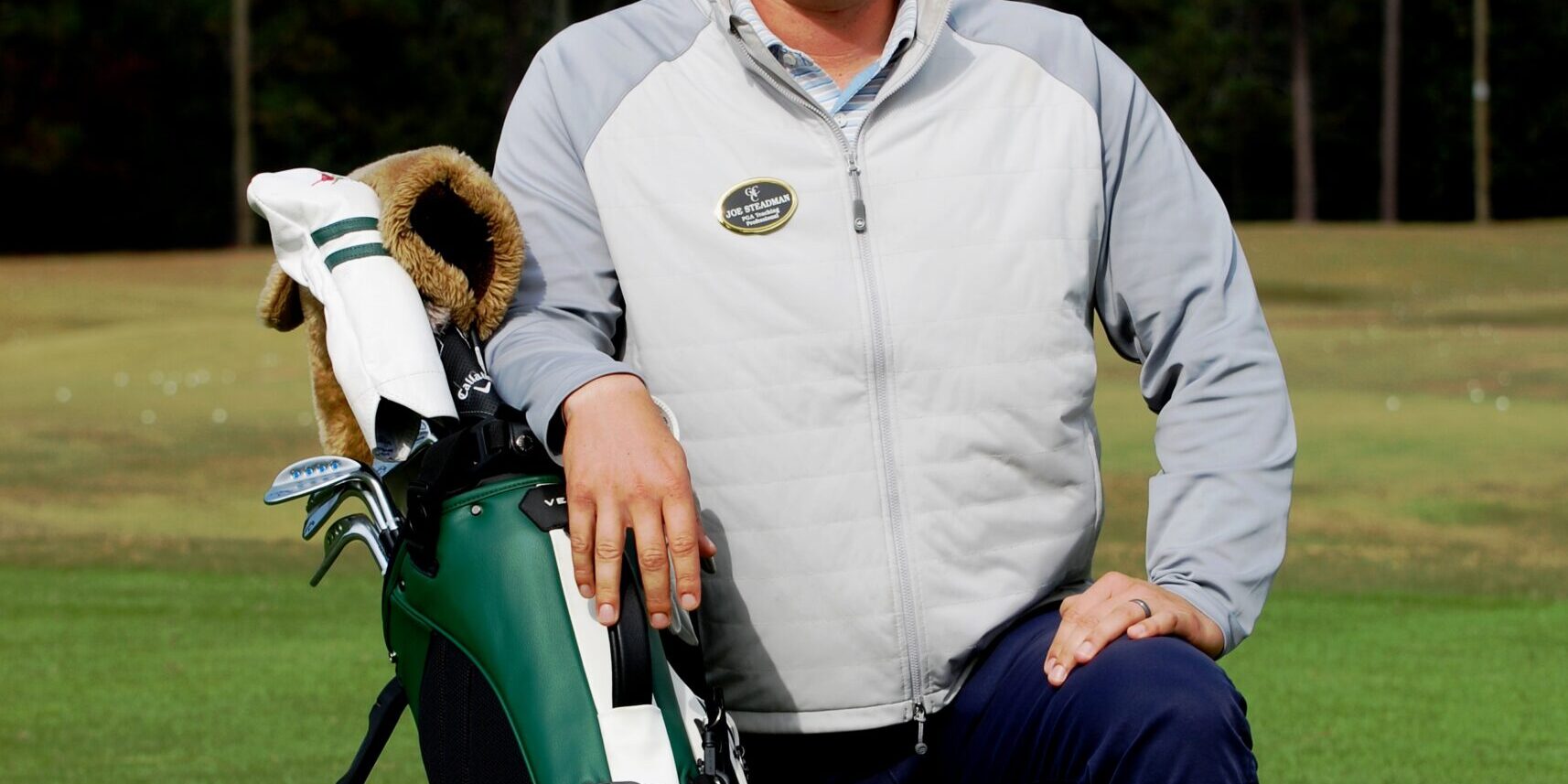 The scorecard from Joe Steadman’s Player Ability Test hangs proudly in his office near the practice facility at the Country Club of North Carolina. The private club’s first teaching professional remembers the day well, logging 36 holes for the first time in his playing days that had included many relaxed rounds with his Fort Bragg buddies.

Steadman was sick that day at Keith Hills Golf Club, but like the 13-year Green Beret had done so many times during much more challenging times on three deployments to Afghanistan and Iraq, he put his head down and trudged on.

He shot an even-par 72 on his first 18 holes, and then closed with a disappointing 80, but was still within range of passing his PAT on his first attempt.

Looking back now, it was a remarkable feat for a tactical weapons instructor who as shooting in the mid 80s and had just enrolled in the Professional Golf Management Program at Campbell University as a 30-year-old still enlisted in the Army.

“I keep it up there on the wall to show people that I’m teaching now, just to look at those two scores,” Steadman said. “The lesson there is I was sick, so the last thing I was thinking about was golf, I was like ‘get me out of here, I feel awful’ but I went out and shot even par on the first 18, not even realizing it. I turned my score in and the program director said, ‘Nice score, that’s the low round so far.’ Then, as soon as I started thinking about it an 80 showed up. I like to keep it as a reminder of how powerful the mental side of the game is.”

Steadman has been through his share of mental challenges that pale in comparison to a PAT golf score. As a sophomore in high school in upstate New York, Steadman watched the Twin Towers crumble, making an indelible impression on the teenager whose father was already in the Air Force.

“It seems like every kid is interested in that stuff, but for me it was 9-11 because I don’t really know how to say this other than it really pissed me off,” Steadman said. “I had a very emotional reaction to that. I was 16 years old, and the towers falling were the first big event in my life to where I was old enough to understand what was going on. It kind of stuck with me over the next few years.”

Steadman’s grades weren’t quite good enough to be accepted into West Point, so he enlisted into the Army and after basic training ended up at Fort Bragg as a member of the elite U.S. Army Special Forces and was sent to Germany in 2007.

Steadman was then off to Afghanistan for the first of three Middle East deployments.

“I was 21 years old and there was a group of us that we didn’t sleep much because you’re nervous and you don’t know what to expect,” he said. “Even though you are trained, you just don’t know.”

Steadman was a weapons sergeant who has a photo of himself at the Kabul Golf Course.

“They have two holes of like mud and dirt,” he said. “There are people out there golfing. It was kind of a strange thing.”

During down time between his three deployments Steadman would play a few rounds of golf in Germany, but really started focusing on the game when he returned to North Carolina as a weapons instructor.

“I was basically teaching the next group of guys coming through advanced tactics, which I loved every minute of it,” Steadman said. “When you think Special Forces all you think of is what you see in movies, but at the core of all of it is training – that’s the Army’s bread and butter — we’re constantly training ourselves or teaching others or learning from others. It is kind of ingrained in you to try to be training or instructing in some shape or form at all times.

“That was definitely a heavy influence on me, probably more subconsciously than I even realized over the years. So, when all we were doing all day long was teaching these training courses you got good at it, got good at reading people, good at reading personalities and adjusting. Even though teaching in that environment is very different than teaching in a golf environment, a lot of it is very similar, like the concepts of instruction, communication – which I found fascinating as I moved into golf instruction. I was like, ‘Oh my gosh this is the same.’ You have to look at the person, know how they work, know how they learn – and you have to learn all of that without them really knowing it. It’s kind of a cool process to go through.”

Golf soon began to consume his life at Fort Bragg.

“We had weekends off, so golf became all I could think about,” he said. “It would be Monday morning and I was thinking, ‘Oh gosh, I’ve got to get this week over with because we’re going to X course with X guys and it’s going to be awesome.’ I really just got obsessed with golf like we all tend to do.”

At the time, Steadman was also battling some negative fallout from his deployments, making him question whether a longer career in the Army was in the cards. He had fallen 20 feet off a building in full gear in Iraq that caused him some back and neck issues, and he was also struggling mentally with digesting his war experiences.

“Some indicators started showing up that it was time to leave (the Army),” Steadman said. “Physically, I was starting to break down.

“And when I was deployed I didn’t have a lick of psychological issues, but all of the sudden your brain starts going through all the stuff that you did and it was challenging. Playing golf was really like a lifeboat, it gave me something to focus on. I was at the point of saying, ‘Hey, I need some help, what’s going on here?’ I was this dude who was always in control of everything and then all of the sudden you have all this stuff going on. For me, the best way I can explain it is your brain tries to process things … hash all these things out. Chemically, you are not ready for it, and you’re saying ‘Holy crap, what’s going on?’

“For me, my wife supported me, and golf was something that I used to channel it. Also, I was fortunate because I had a bunch of guys who loved doing what I loved doing in golf. We had that as a driving factor. I wanted to get better; I wanted to learn about golf. It kind of preoccupied and helped me through that period.”

Steadman recalls being invited to play in a golf tournament at Campbell in 2013 and walked into the pro shop to buy a hat.

“I was like, ‘Holy crap, you can go to college for golf? That’s kind of cool.” I got a beanie in the golf shop because it was 30 degrees out and went on my way. But a few years later as I started looking at schools, I remembered that.

After looking briefly at Methodist’s golf management program, Steadman enrolled at Campbell while still enlisted in the Army.

“Behind any person there is an Army of people who helped them get to where they are at, and I can go back and think of my superiors in the military, at the time they were so supportive of me leaving the Army. They would let me leave one day a week and start classes at Campbell just to get a jump start on the process. If they had not done that we wouldn’t be sitting here now, my whole timeline would have been changed. That spawned a whole chain of events that happened in perfect order.

“If you commit to the golf management program, as an 18-year-old it’s cake, everything is laid out for you,” Steadman added. “I started the program when I was 30. There were two of us that old and they called us ‘The Dads.’”

Prior to graduation from Campbell, Steadman served internships at Metedeconk National in New Jersey, where he studied under top 100 teacher Terry Rowles.

“He was extremely old for a trainee or assistant pro, so I just got on with him as a fellow adult as opposed to a trainee pro,” Rowles said. “He was very curious and he’s just a high achieving guy, so we got along very well. Joe stood out from everybody else even though his technical qualifications in the industry at the time weren’t that far along because he was still studying at college. I saw him as a Green Beret and a competitive human being who asked great questions. I think most people in the golf industry treat him as a golf pro, but if you take him as a father of two who has already retired from a military career-type-of-person then you see him as a different person. Just from being around him and his personality I would imagine he was an unbelievable Green Beret.”

Steadman finished his schooling and returned to Campbell, where director of golf Martha Shooter allowed him to start a small golf academy in Buies Creek that soon mushroomed into dozens and dozens of students, some of which included CCNC members.

One thing lead to another and Steadman found out there was an opening at the prestigious private club in Pinehurst. Without a ton of teaching experience under his belt, he sheepishly approached longtime CCNC director of golf Jeff Dotson about the assistant pro position.

Steadman joined the CCNC staff in February 2020 as an assistant pro, and then became the club’s first teaching pro 11 months later.

“Over the years, CCNC has had many retired officers among our membership, and our Patriot program for active-duty military members has strengthened our connection to the military,” Dotson said. “Hiring Joe was an easy decision and he’s a great fit with our members and staff. Obviously, we all have great respect for veterans, but everybody loves Joe as he’s really just a down-to-earth good guy.”

Steadman’s career path in the golf industry would best be described an unorthodox, but certainly fulfilling to this point.

“I would 100 percent do it again,” Steadman said of his military service. “Some of the guys said, ‘You served 13 years, isn’t that just a waste?’ No, not at all. Every problem I approach now I do it in a manner that the military taught me, whether I realize it or not – the work ethic, the mentality of there is no option that you can’t make that happen –and that’s not something I see that is prevalent in today’s society. It’s going in the opposite direction; people create as many excuses as they can. I would not be the slightest bit successful in the golf industry if it wasn’t for that. If I didn’t have that military mentality I would have gone home and played video games or watched movies instead of staying late and watching Terry’s lessons or coming in early and going with him on trips and helping him set up.

“It’s pretty surreal at times,” Steadman added. “Any life change like this is not easy. But the coolest part is there is such a military presence here at CCNC already, so having those guys here made that transition much less stark. And Jeff Dotson is a legend, and the courses here are fantastic and the membership is fantastic. But you can be the best teacher in the world but if you don’t have that support you will fail.”

And in Steadman’s mind, failing is not an option.