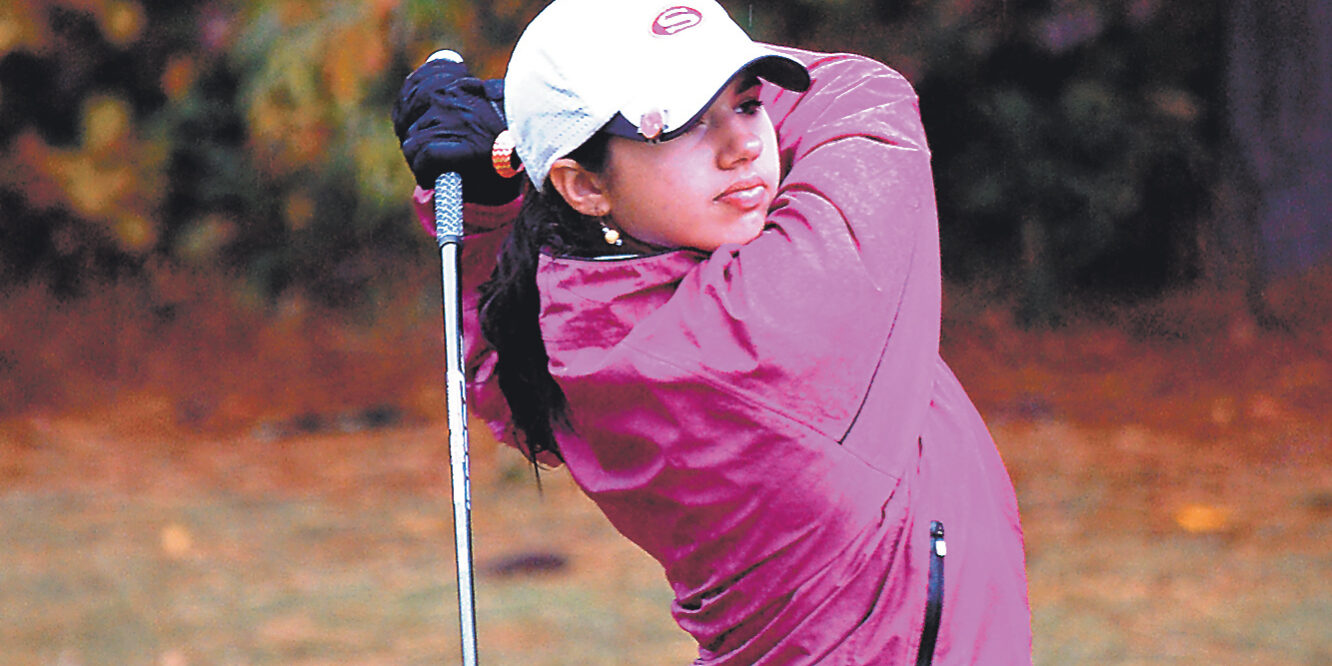 Salisbury had its run of 1-A/2-A state titles end this fall but it didn’t stop the Hornets’ top player from repeating as the individual state champion.

Senior Grace Yatawara survived a playoff to win her second straight title. She  shot rounds of 81 and 77 at Longleaf Golf and Family Club to tie Ellie Porman of Stuart Cramer in Cramerton.

Yatawara won with a par on the first hole of sudden death.

“It was crazy,” Yatawara said. “It was a lot more intense this year with the playoff. I was very nervous. I had to get my coach to walk with me to calm me down.”

Her victory was bittersweet because the team finished fifth at 571, 34 shots behind winner Croatan. Not only was it the end of the Hornets’ four straight state titles, it shockingly marked the end of the women’s golf program at Salisbury – at least for a year.

The Hornets had only three players this year and all were seniors. With no players in high school and none coming up from the middle school feeders, Salisbury is not expected to field a team next year.

Lucas Hatley took over as coach this year for Dale Snyder, who became Salisbury’s athletic director. Snyder was the coach for 13 years.

“He had stacked teams year-after-year,” Hatley said. “This is the tail end of it. We had a bunch of great golfers come through. But I don’t think we have anybody else coming up in high school or middle school. So, we’ll just sit back and try to grow the program. Hopefully, after a couple of seasons we will get something back together.”

“It’s disappointing but it’s nobody’s fault,” he said. “I spent a long time building this thing up. But there just aren’t enough girls playing golf in Salisbury. There will be players eventually. We just won’t have anybody next year.

The 1-A/2-A individual playoff started on the first hole at Longleaf, a par 4, which didn’t instill confidence in Yatawara. She double bogeyed the hole in the first round and bogeyed it the second day.

“I three-putted it both days,” she said.

After both players hit good drives in the fairway, Yatawara was the first to hit her approach shot.

The shot barely reached the green in the windy, rainy conditions, leaving her 35 feet from the hole. Porman landed her approach shot at the pin but it rolled just over the green.

Yatawara hit a clutch putt to about 18 inches while Porman left her chip shot about 6 feet short. When Porman missed her putt, Yatawara tapped in for par to repeat as champion.

“I picked a good time to two-putt,” she said.

Yatawara, a former North Carolina Junior Open champion, wasn’t sure she would have a chance to win again after trailing Porman by five shots after the first round.

“I thought she was going to shoot a much better score and I was going to have to shoot really low,” Yatawara said. “But it ended up I was able to do it. I was striking the ball a lot better (in the second round) and putting a lot better.

“The first round was tough with the wind. My club selection wasn’t good and then my chipping, I was chunking it some. I got my middle school golf coach to help me out with it because he came to watch. He helped me on the range.”

Yatawara, who has a photo of her favorite golfer, Rickie Fowler, on her ball mark, has committed to play at East Carolina next fall.

“I just really enjoy the school, and I really like the coach (Kevin Williams),” she said. “He has been so good to me and been watching me since I was in eighth grade. I really like how he stuck with me no matter how bad or good I’ve played.”

“Grace is by far the best high school golfer I’ve ever had the pleasure of working with,” he said. “She’s just automatic. She is like a golfing machine. She’s out there practicing even when we don’t have practice. She’s a pleasure to coach. She is one of the best athletes I’ve ever been around.”

West Davidson made a run at the team championship, finishing just four shots behind Croatan. The Dragons shot 267 in the first round and were tied with Gray Stone Day for first place. West Davidson shot 274 in the second round for a 541 total.

Both rounds were played in windy, rainy weather. The second round was particularly bad with the rain making soggy, paper scorecards nearly unreadable.

“I’m very proud of the girls,” West Davidson coach David Klinkoski said. “We still finished up a little short of what we wanted but playing under the conditions they played in, I wouldn’t trade these girls for anything.”

Croatan came from five shots behind after the first round to shoot 537.

“I’m not surprised by Croatan,” Klinkoski said. “They are a good team. I wish we had played a little bit stronger but they won it.”

Both Croatan and West Davidson received a two-stroke penalty in the final round. A Croatan player was judged to have tamped down spike marks on the green and a West Davidson player accepted a ride on a cart from one green to the next tee. Players must walk the entire round under North Carolina state championship rules.

It was a strong showing for the Dragons, who only have had a girls’ golf program for three years. They were led by junior Rachael Mast, who shot 84-90 – 174.

Mast was pleased with her score, given the weather.

“Overall, I did fair,” she said. “The second day was a little rough but I was happy with it considering the conditions. It was really difficult keeping the grips dry and trying to hit the ball straight.”