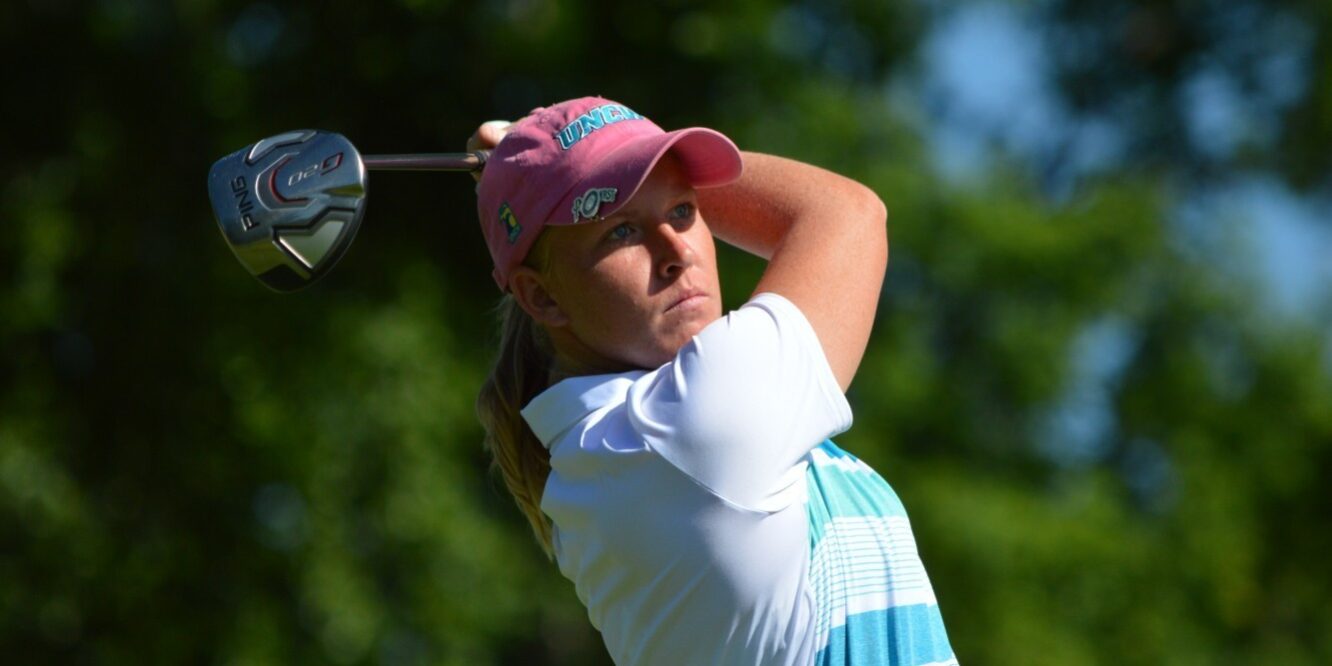 Lori Beth Adams’ most vivid golfing memories of 2015 had nothing to do with what she did to earn Carolinas Golf Association women’s player of the year honors.

It had to do with her practice round at the U.S. Women’s Open, played last July at Lancaster Country Club in Lancaster, Pa.

Adams qualified as an amateur.

For that round – played on Wednesday before the tournament’s opening on Thursday – Adams was paired with Michelle Wie, Jane Park and Ya-Chun Chang — a few of the biggest names in women’s golf.

Wie, especially, is a heavyweight, one of the most recognizable faces of the LPGA.

“I was a little star-struck,” Adams admitted of her inclusion in the foursome.

Adams didn’t let her nerves get the best of her, though, and with her father Steve, who was caddying for her, kept her wits. Heck, Adams even outdrove Wie on one hole.

“And she can bomb it,” Adams said.

“All my friends kidded me, telling me she must have been hitting a 3-wood on the hole.”

For the record, Wie wasn’t.

Despite not making the cut, the experience of playing in the U.S. Women’s Open is one Adams hopes to repeat.

“It was good to be inside the ropes, not just be an outsider looking in,” she said. “I’m ready to be there again.”

Adams, 23, is a graduate of Western Alamance High School and UNC Wilmington, where she was a four-year member of the golf team. Last summer, she missed qualifying for the LPGA Tour by three strokes and will be playing this year on the Symetra Tour, which is an LPGA feeder tour.

The Symetra Tour includes about 15 to 20 tournaments, the only North Carolina event scheduled for mid-May at Charlotte’s Raintree Country Club.

A top 10 finish on the Symetra Tour will assure Adams a spot on the LPGA Tour for 2017. If Adams isn’t successful in securing that, she plans to make another bid for the LPGA through the tour’s Qualifying School.

“The Lord has a plan, I’ve just got to stay patient,” she says.

Meanwhile, Adams was among six golfers in January named Richard S. Tufts Players of the Year by the CGA. The awards were established to honor the Carolinas’ amateur golfers who had exceptional individual tournament performances over the preceding year.

Tufts served on the CGA Executive Committee from 1926 to 1964 and served as president from 1931-33. The awards are given to the No. 1 golfer based on the CGA amateur rankings at the end of the calendar year in each of six categories: Men, Women, Senior Men, Senior Women, Junior Boys and Junior Girls.

This past year, in addition to qualifying for the U.S. Open, Adams finished third at the Carolinas Women’s Amateur and Sally Women’s Amateur. She also advanced to the quarterfinals in the North & South Women’s Amateur, finished tied for fourth at the Harder Hal Women’s Invitational and sixth at the Women’s Eastern Amateur.

“It’s a huge honor,” Adams said of being named a CGA golfer of the year.

While waiting for cold weather to clear and play on the Symetra Tour to commence, Adams is spending part of her winter working in the pro shops at Indian Valley and Mill Creek golf courses, both of which are close to her family’s home in northern Alamance County.

At Indian Valley, where she has been playing since taking up golf at the age of 7, Adams has a nickname.

“They call me ‘Automatic’ because I hit every fairway,” she said.

Other parts of her game have given Adams a bit more of a problem, issues that her longtime coach, Jason Widener of Duke University Golf Course, is working with her to correct.

“We’re fine-tuning my putting and working on a couple of new shots,” Adams said. “It’s like the saying goes: ‘The most important part of golf is the 6 inches between your ears.’ I’m a big believer that’s true.”

Widener has been working with Adams for six years and said he’s convinced she has the potential to play on the LPGA Tour. Adams is confident and listens well to the advice he offers, Widener said.

“She just continues to get better,” he said. “We work on the simple, fundamental things. She’s got the talent and the skill set, she just needs to get comfortable with new levels of competition.”

Adams suffered with mononucleosis while in high school, so she didn’t receive as much attention from colleges looking to sign her. She credits UNC Wilmington golf coach Cindy Ho for taking a chance on her.

“She worked with me and I sort of broke through my junior year,” Adams said.

In 2013-14, her senior year, Adams capped a brilliant career by making her fourth-consecutive postseason appearance at the NCAA East Regional in Tallahassee, Fla.

She was the Colonial Athletic Association’s top player in 2012-13, collecting CAA player of the year honors and winding up second in the CAA Championship as the Seahawks finished runner-up. Adams earned an individual entry into the NCAA Central Regional where she placed eighth overall in Norman, Okla.