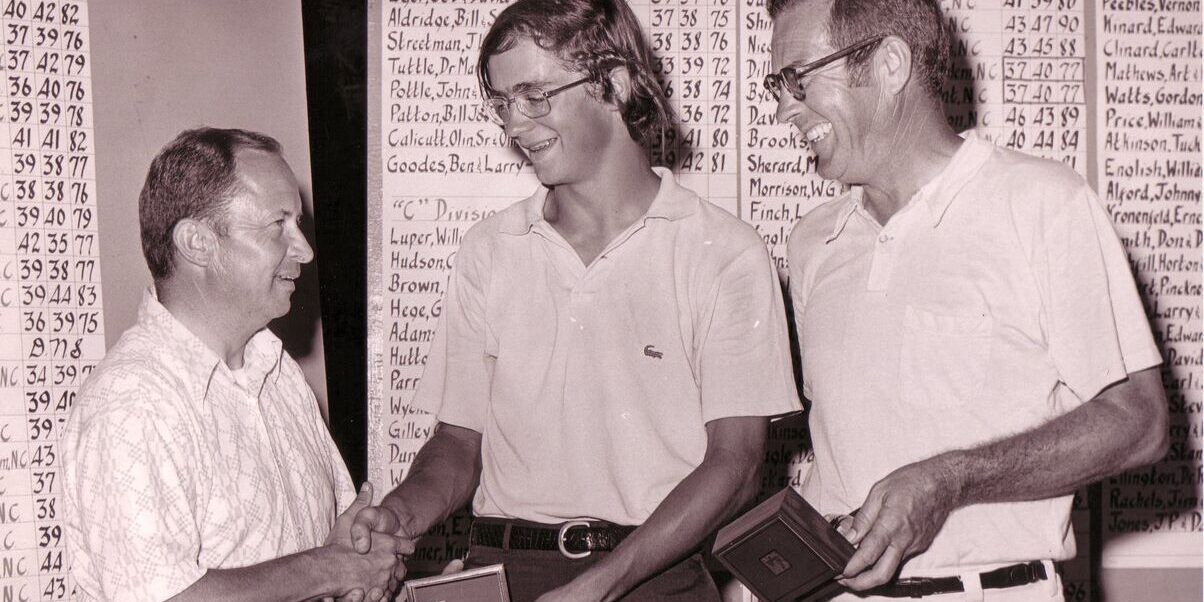 Just about everyone who enjoys golf in North Carolina and South Carolina knows about the Carolinas Golf Association. But as Hale B. Van Hoy and Jack Nance worked tirelessly to grow the game of amateur golf in the region, they couldn’t help but have a little fun with the acronym.

“We had a running joke that CGA stood for ‘Can’t Golf Anymore,’” Nance said with a laugh. “Partly because you’re around it all the time you get burned out, but also because you’re working so many hours, you don’t get a chance to play as much as you like.”

Van Hoy may not have played a lot of golf as he got older, but he helped facilitate thousands of rounds a year as the executive director of the CGA, guiding the organization through a remarkable period of growth. In 1965, the CGA was made up of 136 member clubs, held five championships and handled 7,046 handicap cards. When Van Hoy retired in 1991, the CGA had grown to more than 550 clubs, hosted 14 major championships, and oversaw more than 120,000 handicap cards.

Van Hoy’s leadership, fairness and dry wit – and his near-constant presence on the golf course – were remembered with fondness at his funeral. The Clemmons resident died May 6 at the age of 87 following a period of declining health.

“He had a lot of friends,” said Tom Thorpe, a friend and neighbor who now runs the CGA’s one-day senior four-ball tournaments that Van Hoy started. “Everybody in the Carolinas knew Hale Van Hoy, even internationally and nationally.”

That’s because he was a giant behind the scenes in his 26-year stint leading the Carolinas Golf Association.

Van Hoy graduated from Walkertown High School and the University of North Carolina before starting work as a systems analyst with Western Electric in Winston-Salem. Upon receiving the executive director job in 1965, Van Hoy launched innovative programs – the CGA was the first sectional golf association in the country to employ an agronomist – and expanded the number of tournaments and programs available for golfers in the Carolinas.

Nance first met Van Hoy as a junior golfer in 1975 and was happy to put a face to the signature he saw on all those handicap cards he mailed into the office. In 1984, Nance learned about an opening at the CGA from David Norman, who had been working in the office with Van Hoy, and the trio embarked on a management journey that lives on more than 30 years later.

“He mentored me a lot,” Nance said. “Hale was very efficient at what he did. What I learned from him was not wasting your time and spinning your wheels. He was just good at running golf tournaments.”

Jamestown golfer Larry Boswell recalled Van Hoy as a tournament director who knew the rules, applied them fairly and ran tournaments “with an iron fist, but he wasn’t a dictator.” At one tournament in Mimosa Hills in Morganton, Boswell remembered starting on the back nine and coming around to the first tee, where Van Hoy was running the show.

The old Donald Ross-designed layout had the clubhouse right next to the first tee, and Boswell said the third player in their pairing had vanished – much to Van Hoy’s consternation.

“He got his point across without rubbing people the wrong way,” Boswell added. “He had a subtle wit and humor about him. He was quite a character.”

Nance fondly remembered another favorite joke with Van Hoy, also about finding time to play golf. In all their years of working and traveling with each other, they only played one round together.

All that time running tournaments did not go unnoticed. Van Hoy’s reputation earned him a term as president of the International Association of Golf Administrators in 1989. He stepped down as executive director of the CGA in 1991 – with Nance succeeding him – and was inducted into the CGA Hall of Fame in 1992 for Golf Administration.

Nance said Hale saw “baby boomer golf” on the horizon and wanted to start a senior program through the CGA. Thus, the Senior Four-Ball One-Day tournaments were born.

It was a way to bring competitive golf to those in the 55-and-older crowd, a way to get them to some of the nicest courses in the Carolinas and a chance for the courses to earn some business on what might otherwise be a slower day.

“Those things have been really popular to this day,” Nance said. “They are some of our most successful tournaments that he created.”

Thorpe, who started helping with the CGA in the 1980s and then worked with Van Hoy on the senior four-ball events, was asked to help run the senior tournaments when Van Hoy suffered a stroke in the early 2000s. Since 2009, Thorpe has been in charge of the events.

When Van Hoy had to step away from his work, Thorpe missed the fun times they had shared.

“I went on many trips with him and we spent many a night together in hotels or at dinner,” Thorpe recalled. “He was a funny, witty guy, and very dry. You’d laugh and he’d be just sitting there looking at you like, ‘It wasn’t that funny.’”

Because Thorpe lived less than a mile from the Van Hoys, he still spent plenty of time with Hale and his wife, Peg. The couple was married 60 years and had no children. Even as Van Hoy’s health failed, he remained as matter-of-fact about that as he had been about the rules of golf all those years.

“He took it in stride, never complained about his health issues,” Thorpe said.

That’s why his funeral started off with a joke – about funerals. Nance said that one day when Van Hoy lived in Pinehurst, a friend died: Hale asked another friend, “Hey, Hubert, are you going to Ed’s funeral tomorrow?”

“Why should I?” replied Hubert. “He ain’t coming to mine!”

Everyone who knew Hale B. Van Hoy could appreciate hearing that favorite joke of his being told by Nance and Norman.

“They told a lot of stories about Hale,” Thorpe said. “Some would make you laugh and some would make you kind of sad. It was just about the genuine character of the man. I think everybody appreciated it because that’s how they knew Hale. He wouldn’t have wanted it to be a sad affair.”