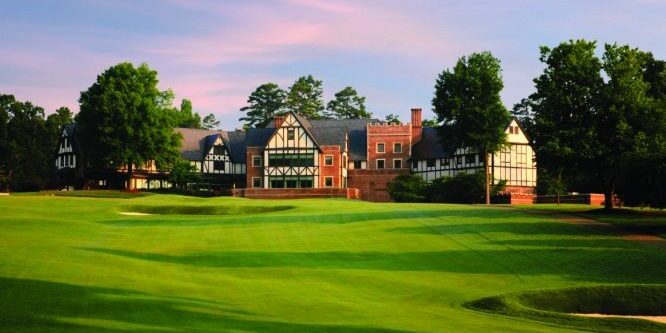 You certainly don’t have to be a golf course architecture geek to understand. If you can’t tell the difference between a Redan hole and a Biarritz, that’s fine. However, if you are passionate about the game of golf – especially in the state of North Carolina – you have to know the name Donald Ross.

A transplanted Scotsman, Ross, who passed away in 1948, built a legacy of 413 courses, including Pinehurst No. 2, Seminole GC, Wannamoisett and Oakland Hills. More than 100 U.S. national championships have been played on Ross designs.

In North Carolina, the Ross options – aside from Pinehurst, where he eventually made his home – consist of Linville GC, Grove Park Inn, Pine Needles, Wilmington Municipal, Forsyth CC, Carolina GC and Raleigh CC, to name a few.

The Wyndham Championship will be held Aug. 15-21 on the Ross course at Sedgefield Country Club in Greensboro. Founded in 1938 as the Greater Greensboro Open, the Wyndham is the sixth-oldest event on the PGA Tour. After 31 years at Forest Oaks, the Wyndham moved back to Sedgefield in 2008 and became the only regular-season Tour event contested on a course originally designed by Ross.

The Wyndham consistently draws a high-class field; in fact, a certain golf professional with 14 major championships finished in 10th place last year. Hint: he wears a red shirt on Sunday. Not to be overshadowed by the “Tiger effect,” Davis Love III finished at 263 to win by a stroke over Jason Gore.

What makes this course so interesting that it can host the game’s best in both the balata and persimmon days through today’s PGA Tour player?

Kris Spence, a Greensboro-based golf course architect and Ross restoration expert, has some answers to that question. It was in 2007 when Spence was chosen to head up a $3 million restoration process at Sedgefield which took 10 months to complete and resulted in a 7,117 yard course playing to a par 70.

Spence points to the routing as special. “It’s one of the few Ross courses to wind through a neighborhood, and it interacts with the land in an unorthodox manner,” he said.

Some examples are displayed in the 2nd, 4th and 11th holes. Ross turned the fairway slopes away from the player, creating a camber effect where the bank of the fairway turns away from the dogleg. Very seldom will players aim where they want the ball to finish; they are most likely aiming for one part of the fairway with the ball rolling to the opposite section. “Ross knew the ball would tend to move from the high side to the low side, so he entranced the green from the high side,” Spence said. “So, the player would have to cut the ball into the hill knowing that a draw or straight shot would run to the low side, so it’s a bit of a different angle.”

Spence added that Ross mixed the approach shots on each hole. On some holes, the ball is above the player’s feet in the fairway but the approach shot calls for a cut (for the right-handed player). “It’s the little nuances – angles, twists and turns – that make Sedgefield very interesting. There’s nothing standard or stereotypical about it,” he said.  “It’s a course you really need to learn and asks that a player be creative to score well. It was designed in an era where you had to shape the ball.”

Rocky Brooks, director of golf at Sedgefield, said the course to be in good shape because of all the rain and reasonably set up for the players.

“Research has shown that the golfing public enjoys watching the professionals make birdies and shoot low scores. That’s fine, but on the other side, I don’t want somebody shooting 59 on our course,” he said.

Memories of Brandt Snedeker’s 61 in the second round last year must still be fresh. Brooks also admits that he enjoys watching the game’s best have to think on each hole and not play “bomb and gouge.”

“It’s a course where the player has to shape the ball and run it up into the green using the ground. Of course, the longer hitters will always have an advantage in that they can hit two-iron off most tees to find the fairway. But, that will always be the case,” Brooks said.

“It’s always a fun week,” added six-time PGA Tour winner and former Wake Forest star Bill Haas. “This is a course where anyone can win; it sets up for every type of player, which is the mark of a great, great golf course. You don’t have to be a bomber off the tee to win here. If you miss the greens good luck getting up-and-down. It is a challenge. I think you see a lot of good scores around here but if you look down the list it beats people up, too.”

The Donald Ross Society is a non-profit organization formed in 1989 to be a caretaker of Ross courses. When renovation work is needed, the society offers help in the form of archives, original routings, photographs and on-site visitation in an “effort to maintain the course’s original look, shape and playing character; and when accommodations are needed for the modern game, they should be consistent with the original design intent.”

The group’s president, Michael B. Fay, is quick to note that Sedgefield, while a regular stop on the Tour, isn’t the only Ross design players will see. “East Lake is a Donald Ross. I know because I helped redo it,” he said. Also, every other year, one of the playoff events takes place at Plainfield CC in New Jersey. Fay said he’s pretty happy because when the society formed, there were no Ross courses on Tour, and “now there are two big ones and a third one every other year.”

Fay spent a good deal of time at Sedgefield during the restoration. Modern technology aside, he believes they have lengthened where they could lengthen, but it’s landlocked so there really isn’t any more room.

“It’s big enough for a PGA Tour event, and Ross packed a lot of punch into it when he built it. The greens are very intricate and Kris (Spence) left a lot of the slope in them during the restoration. Unfortunately, the Tour doesn’t want people making bogies so they put the pins in places where they are accessible and the pros would shoot well under par,” Fay, obviously a fan of the U.S. Open, laments.

Fay laughed and agreed because the par 5s aren’t much to think about (for the professionals) and the par 3s are next to impossible.

Hearing that anecdote, Brooks laughed and said that he was talking with Tiger Woods last year after the tournament, going back-and-forth on whether the course was tricky, a term used by Tiger to describe some of the holes. After a little while, they came to an agreement on one thing. “I’ll tell you one thing, those are some of the hardest par 3s I have played,” Woods said.