A successful decade for Bill Haas 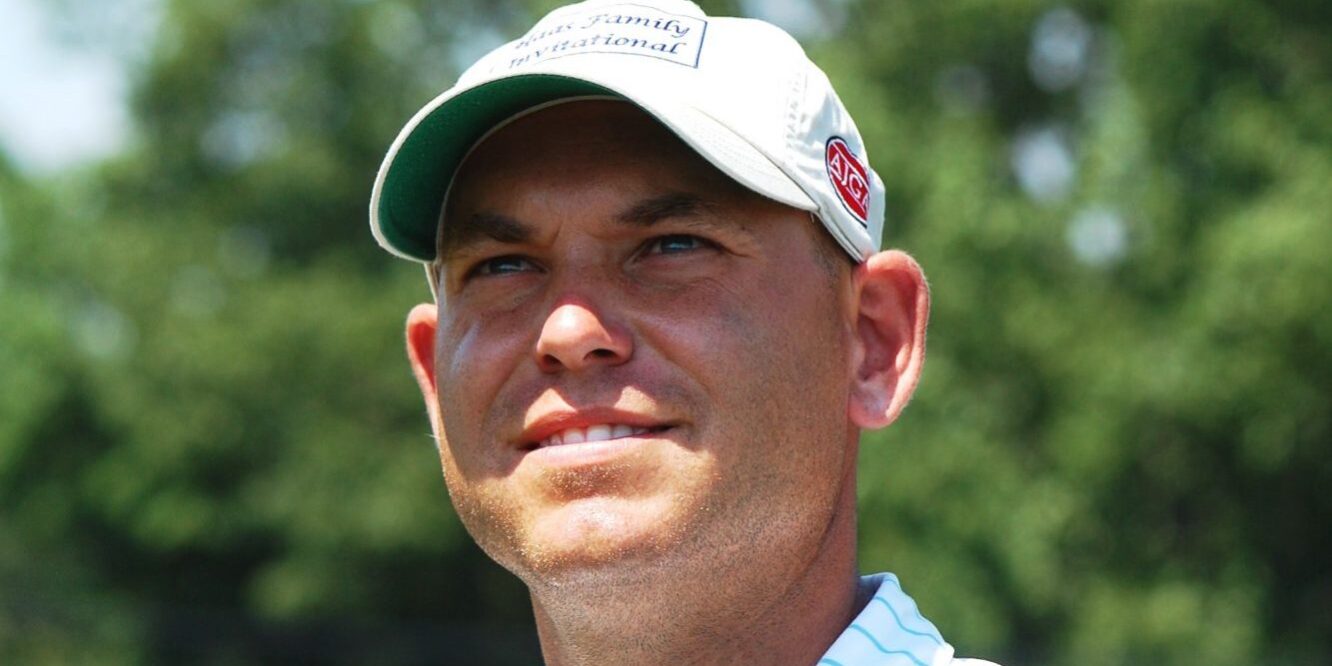 As part of a family that has played in some 2,000 professional tournaments, Bill Haas certainly knows his way around the golf course. His great uncle Bob Goalby won the 1968 Masters, his father Jay was a three-time Ryder Cup member and uncle Jerry coached Bill to All-American status at Wake Forest.

Bill Haas has now been on the PGA Tour for a decade, and heads into this year’s Wyndham Championship without that elusive major championship many predicted he would capture after winning the 2011 Tour Championship and lucrative $10 million FedEx Cup title.

In fact, the younger Haas has just one top 10 finish in 28 major starts – that coming in the most recent British Open a few weeks ago.

“I have always been taught by my dad to break the rear view mirror off,” Bill Haas said. “You know, what has happened has happened. I don’t seem to do that well in the moment all the time, but I’ve always been good that night saying, ‘Hey, that day is done, tomorrow is a new day. If I miss a cut it’s done and you go prepare for the next week.’

“I don’t think I’m hard on myself that it has made me a bad player week-to-week, but sometimes I am hard on myself where it makes me a bad player day-to-day,” Haas added. “But as you grow older your prospective changes, you have a family; I have two little boys, and my two kids certainly trump having a bad tournament. It certainly makes you realize there are more important things in life than this game. Still, they also motivate you to be a good player and make them proud of you.”

At 34, Haas is in the prime of his career, but the talent on the PGA Tour is as deep as ever, with players such as Jordan Spieth, Dustin Johnson, Rory McIlory, Ricky Fowler and Bubba Watson stealing most of the recent spotlight from players such as Haas.

“Winning the Tour Championship certainly gave me confidence, but then again you know how good these guys are. I don’t think it’s in my nature to have an ego or to be so confident,” Haas said. “I like to keep myself in check and realize you just can’t expect to win every time you tee it up just because of one little bit of success. That may hurt me at times, but it also makes me realize what I need to work on and know that it can be taken away from you if you’re not careful.”

Every Kid Wants to Play on the PGA Tour

Part of Haas’ attitude was formed as a youngster and teenager at home, playing golf with his father and his professional friends, realizing the dream of playing on the PGA Tour would require not only skill, but hard work and dedication.

“At a young age you think you can do anything, but I will say I lived with a PGA Tour player and I knew when I was that young that I was not that good,” Bill Haas said. “I got to play with my dad on a daily basis and got beat every time I played against him. That was the motivation I needed to come out here and try to beat the kids my age and have stepping stones, or building blocks to become a good college player, and from there become a good professional player and hopefully make it on the PGA Tour.”

And then there was uncle Jerry, his college coach in Winston-Salem.

“Jerry was the best player on the team so you just know that this guy can help me get better,” he said of his uncle. “That was such a tool and such an advantage for me in college. We were ranked No. 1 in the country for a lot of my senior year. You need that competition on a daily basis. My advice to young golfers is to always play against players who are better than you and try to figure out why they are better than you, try to find out what gets them to that level and then try to emulate that.”

With the Haas name as a calling card, there was immediate pressure entering Wake Forest, but not immediate results.

“Quite frankly he started a little bit slow,” coach Jerry Haas said. “I think he thought he was going to set the world on fire and he didn’t get off to a great start. But having a father who had been through it – who had played some really good golf at times and bad golf and struggled — I just told Bill to hang in there. College is a big adjustment. You think if you are great player that it’s going to go so smoothly and as planned, but it sometimes doesn’t work that way — especially with golf.

“I tell the people that if you have a kid that looks like a ‘can’t miss’ in football and he can’t catch all of the sudden they find another position for him, say linebacker. But in golf, if you can’t do something you’re in trouble. With Bill he just would get impatient and expect a lot of good things.”

By his senior season, though, Haas had “PGA Tour” written all over his game. He became a 10-time college winner, was runner-up at the NCAA Championship in 2004, and his 68.8 scoring average set an NCAA record.

“He just got better and better and more mature each year,” Jerry Haas said. “He has a scoring record that I think will never be broken. You know, a 68.8 scoring average is pretty low. You’ve got to shoot some good scores over and over and over again, and you can’t have a bad tournament. He was rattling them off. He had 15 straight rounds in the 60s.”

Jerry Haas recalls a funny story about “the streak.”

“I tried to take the team to places that they might play in the future on Tour so we went to English Turn in New Orleans where the USF&G tournament was,” Jerry Haas said. “I watched Bill hit a shot on No. 16 to about 25 feet and I said to myself, ‘what a bummer, he’s going to shoot 70 today, you had a nice streak going.’ When I saw him later he said, ‘No, no, I shot 69. I made that putt on No, 16. I turned around and had my putter raised but you were driving the cart away.”

Nothing at the time seemed too remote for Haas to accomplish in golf, including recording birdies on the final two holes of Q School to secure his PGA Tour card at age 24.

With six PGA Tour wins, Haas is no stranger to holding trophies aloft, and he has won $26.4 million playing a game he loves. Yet, there is no major accomplishment on his resume.

“The Tour Championship was only my third win on Tour, so for me to win that caliber of event, against the 30 best players of that year, that meant a lot to me personally. But you have to just keep grinding and practice properly, not excessively, but practice with a purpose and try to get better on the things you’re struggling with. Just don’t hit drivers because you’re driving it good.

“I have been fortunate enough to win three more after that and have six wins. I definitely would have liked to have won more, but you have to be proud of what you’re done and realize it’s hard to do. I have to give the Tour Championship win credit for some of the other wins I’ve had.”

In January 2015, Haas won for the sixth time on the PGA Tour, at the Humana Challenge. He shot a final round 67 for a total of 22-under-par and one stroke victory over five other players. It was a nice comeback for Hass after returning from a fractured wrist injury that hampered him throughout the 2014 season.

Haas certainly wasn’t going to track down Henrik Stenson or Phil Mickelson to win the 2016 British Open, but he came into the final round in third place. However, he recorded the worst score (75) of any of the top 10 leaders. At Oakmont, Haas shot a second-round 69 but shot 74 on Sunday at the U.S. Open. And at this year’s Masters he didn’t break 72 in any of his four rounds.

“It is a blessing, an accomplishment and an achievement just to be on the PGA Tour, but once you’re out there and competing you want to win,” Haas said. “I would have loved to have won more, but what I have accomplished I don’t take for granted. You have to step outside yourself and say, ‘I can get better, I can win more golf tournaments.’ And certainly a major championship would be icing on the cake for anybody’s career. But I would also like to compete in them more too, I would like to be in the top 5 on Sunday and be in the mix. I think that’s what we all play for. If I can get there a little more often that’s a great goal of mine.’

“The weeks you win you putt better than everybody else and you get up-and-down a few times when you normally don’t,” he said. “Certainly there is decision-making and confidence, and sports psychologist will tell you a player won because he was confident. But I think a lot of players will tell you they are confident because they won. If you don’t think you’re going to make the putt you’re probably not. You have to be confident over every shot, to think you’re a great player and think you can win, so that stuff is a given. There is just no substitute for great ball striking, chipping and putting and just shooting a good score. That’s the reason Tiger and Phil are so good. These guys just hit it really well, so in turn it makes them confident. Everybody out there thinks they can do it or they wouldn’t be out there.”

Coach Haas believes Bill’s consistency and relentless ball striking ability will produce that elusive major in the near future. It also takes some luck.

“The better you play and the more you get up in the hunt the more you enjoy it and the more you look forward to it,” Jerry Haas said. “I told Bill in college that Thursdays come pretty fast when you’re making cuts. When you are missing cuts it takes forever. It is good to keep some momentum and keep playing.

“His dad is pulling for him, and his wife and his college golf coach, but other than that nobody really cares. In fact, they hope you don’t play well, so you almost have to just play the game and let your natural ability or good ball-striking take over. He has also won on Tour before so those things seem to win out at the end of the day.”