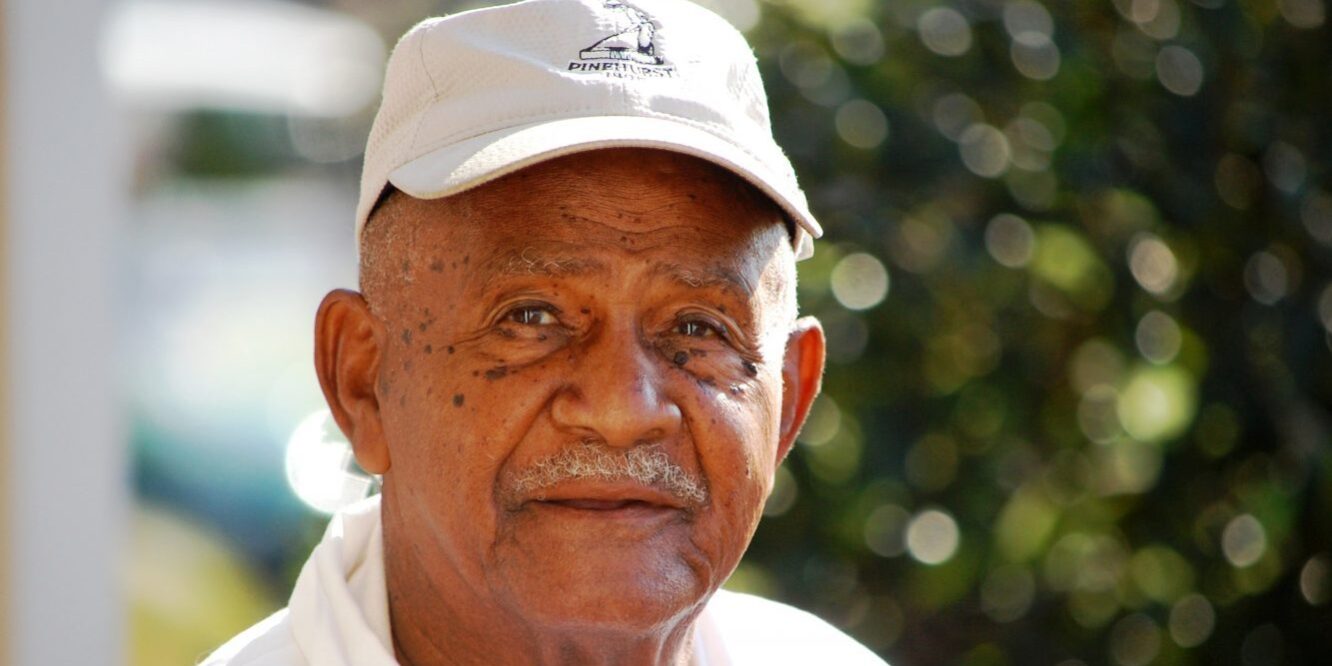 Willie McRae sits comfortably on the veranda at Pinehurst Resort, looking out over a golf course he knows better than anyone who has ever lived.

That might sound like an overstatement, until you consider that he is in his 73rd year caddying at Pinehurst No. 2. When a man’s career endures longer than many people’s lives, his claim is indisputable. It is the stuff that legends are made of.

“Just about everybody out in the community knows me,” McRae says. “It’s a wonderful thing.”

But it’s not just the locals who know about Willie. He has caddied for U.S. presidents, the greatest names in golf and countless celebrities. For his remarkable contributions at Pinehurst Resort and Country Club, he will be inducted into the Carolinas Golf Association Hall of Fame in February.

At 83, McRae has slowed down in recent years. He can no longer walk the course, so Pinehurst Resort accommodates him with the unique privilege of driving a cart when he caddies.

Such is the nature of Willie’s renown at No. 2. He couldn’t have imagined such preferential treatment when he showed up on May 19, 1943 — on his 10th birthday. His father, also a caddie at Pinehurst, brought Willie to work with him. Before long he found himself carrying for Pinehurst owner Richard Tufts and course designer Donald Ross.

“I had the opportunity to caddie for them two guys,” McRae says. “I had to walk down the middle of the fairway with two bags. Back in them days, you’d get $1.75 for two bags and a 50 cent tip. I gave Momma the $1.75 cents and I kept the 50 cents. Twenty-five cents went for candy and that would last you the whole week – unless your brothers and sisters would get any.”

Hard work for a 10-year-old perhaps, but an opportunity he welcomed.

“It was nice because I was glad to get off the farm,” he says. “That farm work was a whole lot harder than caddying. I had to pick cotton, prime tobacco, shuck corn.”

For more than seven decades, he has carried clubs for the greatest names in golf, including Bobby Jones, Gene Sarazen and Arnold Palmer. He has stories from all of them.

“Sarazen was the fastest player that ever played,” he remembers. “He’d say, ‘What is this, a four-iron?’ As soon as he’d get it in his hand, he’d snatch it back and it was gone.”

And there are the wannabe greats from other sports, like Mickey Mantle, Michael Jordan and Charles Barkley. He has caddied for four Presidents, including Dwight Eisenhower, Richard Nixon and Gerald Ford.

“All of them were nice people,” McRae says of the Commanders in Chief. “I never had any problem with them. We joked and had fun. Every once in a while you had to tell ’em a joke to make ’em get on the ball.”

For one afternoon, McRae would call the shots for the most powerful men in the world.

McRae has earned a reputation for his work on the bag, navigating the course for novices and low-handicappers alike. Based on the grain of the grass, he knows that putts traveling east-to-west are slower than those going west-to-east – and so many more details.

“First and foremost, Willie is a great caddie,” says Tom Pashley, president of Pinehurst Resort and Country Club.  “He can read your putt as soon as the ball stops rolling on the green. He’s the only caddie I’ve seen who can read putts from 150 yards out.

“And his stories are world class. Plus he mixes it up by dropping an unexpected joke. He’s a great caddie with incredible stories who’s fun to be around. That’s Willie’s secret.”

That secret – the part about fellowship – is McRae’s calling card. He’s not afraid of a little give-and-take with the folks who have the good fortune to play Pinehurst. As Willie chats away with a writer, a golfer strolls by and interrupts with, “Hey Willie! When are you going to start working for a living?” McRae just smiles.

The working has come easily for 70-plus years. Despite growing up in the segregated South, McRae has few regrets about his station in life. Out-of-town guests request him on a regular basis. One prominent business executive always takes Willie out on the course, but not without first telling him, ‘You’re a lousy caddie, but you’re good company.’ McRae likely has a comeback for that.

“The people now that call for me, they’re so polite, so nice,” he says. “Sometimes I’d have nine requests in one day, but you can’t do but one. Most of the time, the guys that request you, you don’t know ’em.”

That’s the magic of Willie.  His reputation precedes him.

“Willie’s honest, he’s true,” says Chris Garner, the assistant caddie master. “He never treats anybody differently. Everybody is the same to him, whether you are a millionaire or a regular Joe saving every penny to come play here. He treats everyone with class. He’s just a good guy.”

His attitude is not a practiced act. It is who Willie is at his core.

As a young man, McRae was a scratch golfer. He served in the U.S. Army in the 1950s, but he was never sent overseas. Instead, he was stationed at Fort Dix in New Jersey, where he was captain of the golf team and cared for the golf course on base. He later played is some smaller tournaments, finishing second a couple times. He wasn’t fond of the pressure, though.

To hear Willie tell it, missing out on a professional playing career is hardly a regret. He has spent his years on the golf course dispensing his unique blend of golf wisdom and levity. He can’t help a hacker break 80, but he can help you find the humor in the game you’ve got.

“One day this lady asked me, ‘Willie, what’s wrong with my game?’ I said, ‘Lady, there’s only one thing wrong with your game: you’re too close to the ball after you hit it.’

The woman and her friends came back year after year, always reminding Willie of his sage advice.

McRae applies his no-nonsense philosophy to his job, too.

“One thing about caddying: you got to show up, keep up and shut up,” he says, reciting the creed that caddies have lived by for generations. “If you don’t know nothin’, don’t say nothing.

“Most of caddying is common sense. You got to be on your Ps and Qs when you caddie because the people you caddie for are always right even when they’re wrong. They’re paying you for service. The better service you give, the better you’re going to get paid.”

McRae will keep caddying as long he is able. The requests still come in about every other day, and Willie makes it out about five days a week. He keeps Sunday free for church, where he is often asked to preach.

“As long as you got your health and strength and the Lord on your side, you’ll know where you’re at at all times,” he says.

Dressed in his white caddie coveralls, Willie leans back on a wooden bench in the cool autumn shade. He’s wondering about one of his golfers, a lawyer from Washington, D.C., who comes to Pinehurst for a week at a time.

“Been coming here for years,” Willie says. “He hasn’t come this year yet. I’m lookin’ for him though.”

“He’s a treasure,” says local golf memorabilia shop owner Tom Stewart. “His longevity and his sincerity are unheard of in today’s world. “He’s like the Energizer Bunny. And he’s the only guy who is allowed to drive a golf cart down the middle of the fairway at Pinehurst No. 2. That says it all.”