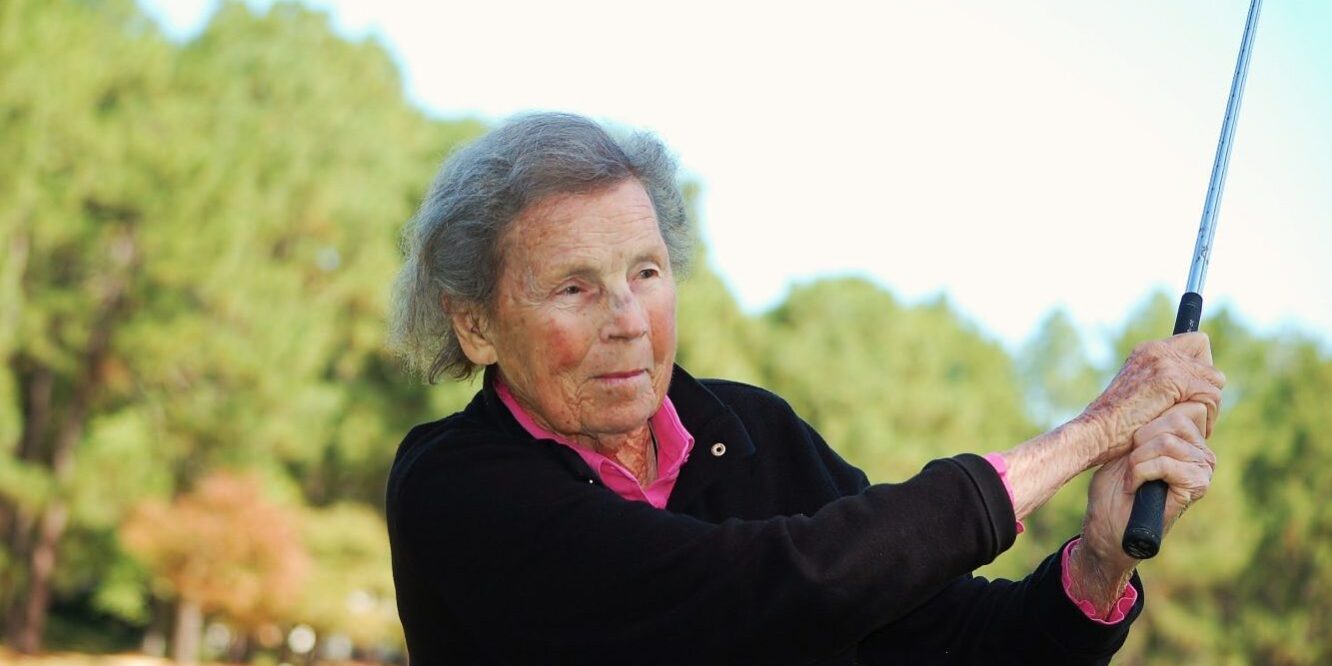 When Peggy Kirk Bell first met golf at age 17, how the wondrous, intertwining 78-year journey would unfold must have been unfathomable.

In 1938, the idea of a young woman becoming a golf instructor or a touring professional or even a savvy business negotiator was likely as much wishful thinking as practical because few such opportunities existed.

Had her mother Grace not deemed her too old for camp or had there been more to do in her small hometown of Findlay, Ohio, Mrs. Bell may never have met golf.

No doubt thousands of golfers over the more than three quarters of a century until her passing in late November at 95 would have been the poorer.

But what metric quantifies the number of doors opened by Mrs. Bell for being a charter member of the LPGA in 1950? Or lending her name to a North Carolina-based developmental golf tour for young women? Or offering a simple word of encouragement to a player struggling to find improvement on the driving range? Or for not hesitating to host a U.S. Women’s Open even though the bottom line would show in red?

“Her impact was so far reaching,” said Judy Bell, a former U.S. Golf Association president whose friendship with Mrs. Bell dated back to the 1950s. “I think of her tremendous generosity, her selfless giving of her time to help others, her teaching and her faith.”

Talk to anyone about Mrs. Bell and Judy Bell’s words resonate like an echo.

Her list of honors reads like scrolling movie credits, but a few speak to her stature in the game — the Bob Jones Award, the USGA’s highest honor for distinguished sportsmanship; induction as the first women into the World Golf Teachers Hall of Fame; and the LPGA’s Patty Berg Award, that recognizes a person’s diplomacy, goodwill and contributions to the game. Golf Digest magazine once named her among the five most influential women in the sport.

As an amateur, her signature wins were three consecutive Ohio Women’s Amateur titles (1947-49), the 1949 North and South Women’s Amateur in Pinehurst and the 1949 Titleholders Championship, then considered a women’s professional major. In winning the Titleholders, Mrs. Bell defeated professionals Berg by two strokes and good friend Babe Zaharias by five.

A year later, she was a member of the victorious 1950 U.S. Curtis Cup squad captained by Glenna Collett Vare, a six-time USGA champion who is considered the greatest female golfer of all time. Mrs. Bell soon turned professional, became one of the LPGA’s 13 charter members and played the tour sporadically into the mid-1960s.

In 1953, Mrs. Bell and her husband Warren “Bullet” Bell began leasing Pine Needles Lodge and Golf Club, which they later bought outright. A year later, she stepped into instruction and soon found her voice.

“She understood the mechanics of the game and instilled them in a simple manner,” said Peter Stillwell, who interacted with Mrs. Bell while serving as executive director of the World Golf Hall of Fame when it was located in Pinehurst. “She wasn’t as technical as a lot of instructors today, but she was able to explain the mechanics of the swing very easily. And people were very comfortable with her teaching techniques.”

As Stillwell can attest, Mrs. Bell’s masterful story telling and knack for remembering people complemented her teaching style. Stillwell heard her tell numerous stories about his mother, Jeanne Cline Stillwell, who was a college classmate Mrs. Bell’s at Rollins College and longtime friend.

Golf did not come easy to Mrs. Bell, who often said it presented the biggest challenge of any sport she had ever tried.

“Ben Hogan helped me immeasurably by making me put my left hand straighter on the club,” Mrs. Bell wrote in an instructional piece for Sports Illustrated in 1959. “I had thought it was impossible. What fortifying this fundamental did for me was to put my feel less in my grip and more in the club head, and it strengthened my whole swing.”

A little-out, little-in loop in her waggle above the golf ball was learned from Tommy Armour, who described the technique as a mini swing. A slight bent knee movement forward before swinging came courtesy of Byron Nelson.

Such nuggets were not hoarded by Mrs. Bell.

Mrs. Bell routinely walked through the Pine Needles dining room in the evening with a glove stashed in her blazer. To diners willing to glean a tip, she would put the glove on and swing a fork or any other utensil to make her point.

Mrs. Bell had a fondness for growing the game. Her Golfaris —a melding of golf instruction and social experiences she created for women at Pine Needles— have been a smashing success. Her soft spot, perhaps, was with junior golfers, who she never charged for a lesson.

“It was her way of giving back,” Miller said. “Her pro, Leonard Schmutte, never did that, so she just carried that on.”

In 2007, Triad Youth Golf Foundation president Chris Haarlow, a former student of Mrs. Bell, approached her about lending support to a fledgling developmental tour being created to empower junior girls.

“There was no hesitation,” said Robert Linville, the tour co-founder. “We wanted to do something to continue her legacy and keep her name out there as the matriarch of golf.”

The tour, with a footprint that expands from Georgia to Pennsylvania, has grown from six events and 65 girls participating that first year to 52 events and 660 participants in 2016.

“Obviously we’re trying to teach the girls who come through a little bit about what she did, using golf as a way to impact them in ways that are immeasurable,” Linville said.

Sometimes overshadowed by her being an outstanding player and world-class instructor was her business acumen. Miller said she was very hands-on in the operations of Pine Needles Resort and later when the family purchased Mid Pines Inn and Golf Club just across the street.

Pine Needles’ hosting of the 1996 U.S. Women’s Open was one such deliberate decision. The U.S. Girls’ Junior Championship in 1989 and the U.S. Senior Women’s Amateur Championship two years later had been held on the Donald Ross-designed course. For Bell, though, there was a missing jewel.

“Now if we just had the Open, we’d have it covered,” she said at the time. “And it wasn’t too long after that we got the Open.”

“It’s sad that Peggy won’t be with us for that Senior Women’s, but I expect it will be such as much a tribute to her as the Opens were,” Judy Bell said.

While Mrs. Bell could not have imagined as a teenager how her life with golf was going to play out, she was certainly grateful.

“Her attitude was to use golf to make life better,” Stillwell said. “And that was through instruction, through the resort, her Golfari experiences, the tournaments she played in, the people she met. She would have said she was a lucky person because she got to play golf and all the rewards she had in life came from the game.”

Golf was just as lucky to have met Mrs. Bell in the first place.