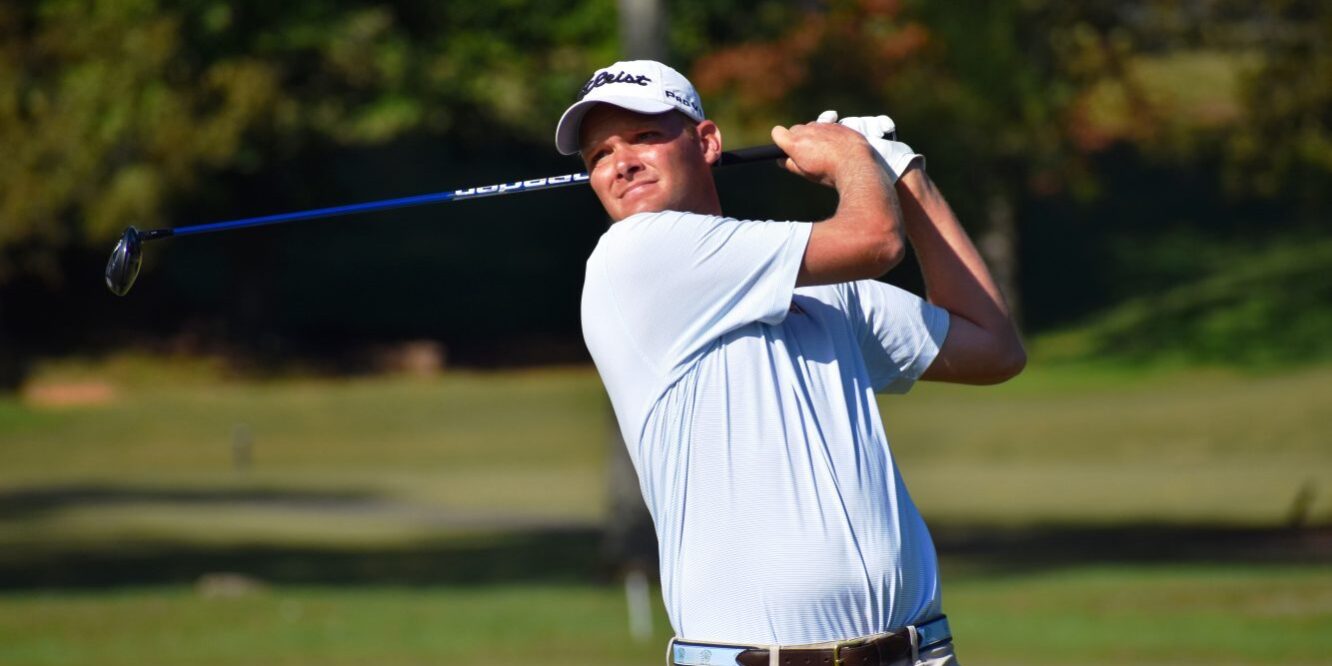 Scott Harvey was playing a practice round at the 2017 U.S. Open with Jordan Spieth, Jim Furyk and Steve Stricker when he was reminded exactly what he is – an amateur golfer from North Carolina with a full time job.

As the co-owner of the property management firm S & K Triad Properties with wife Kim, Harvey’s magical foursome in the sun was interrupted by a slight problem that had nothing to do with a wayward drive or three-putt.

“I started getting messages about water leaking in a rental property so I spent two holes on the phone trying to get things lined up for repairs and straightened out,” he said laughing. “But for the most part the good outweighs the bad.”

Harvey, who will turn 40 in May, is generally regarded as one of the top mid amateur golfers in the world. His list of accomplishments in just the last three years still has him shaking his head.

“So now, I don’t even know where to go with golf. I thought I would struggle finding motivation, but what I’ve learned is I just love the game so much there is nothing that can ever stop me from playing and being into the game of golf.”

His motivation prior to all of his recent success came from his hero – father Bill Harvey, who himself was a North Carolina golfing legend.

Bill Harvey passed away in October 2013 after a long battle with cancer, having won eight Carolinas Golf Association championships and played in 18 U.S. Amateur Championships. His CGA titles spanned four decades with his Carolinas Senior Amateur victory in 1990 his last title.

When Scott Harvey was passed over this year for the Walker Cup team, he quickly entered the North Carolina Mid Amateur in September and won the event by a whopping nine shots. He was the only player under par.

The victory as a milestone of sorts as Harvey matched his father’s CGA victory total of eight with still plenty of golf in the tank.

“I could talk for three days about stuff with my dad, but honestly it’s not one story that sticks out. He was everything to me,” Harvey said.

“Scott is very much like his dad in that he is honest and straightforward,” said CGA executive director Jack Nance. “He and his dad’s loyalty to the CGA are deep. Scott will always have opportunities to play at the highest level internationally, but he is diligent to check in with us to make sure we know where his heart is. I always encourage him to compete at the highest level possible because when he succeeds we all succeed. But unlike other national players, Scott makes it a point to compete in CGA events somehow and some way during the year.”

Bill Harvey missed out of seeing his son hoist the 2014 U.S. Mid Amateur Championship trophy, or Scott taking home the 2015 South American Amateur in Peru, or strolling the fairways at Augusta. However, the elder Harvey was around to see his son take quite an unorthodox path in golf.

Scott Harvey was a college golfer at High Point University before joining the professional mini tour circuit – essentially the minor leagues of golf. Scott more than held his own, winning some, staying afloat financially (which is no easy task) and hanging out with guys like Bubba Watson.

“I didn’t like the lifestyle and how serious everybody was — like it was a life or death situation — nobody seemed like they were having fun,” Harvey said. “It just wasn’t for me – period. Bubba and I were roommates and we had fun playing putt-putt and goofing off after golf, but everybody was just so serious. Amateur golf is just totally different.”

After the mini tour experience, Harvey returned to Greensboro to take over his father’s driving range on High Point Road. When the city stuck a road through the range, Harvey started his own property management firm – and regained his amateur status as he was about to turn 30.

“No, leaving pro golf wasn’t a hard decision,” he said. “It’s like having a bad job, you feel like all the people around you are miserable so it’s not that hard to get away from it.”

For the first time in awhile, Harvey was having fun playing golf again.

“That kind of got my flame lit again and I started playing some,” he said. “In 2007 was the first time I tried to qualify for the U.S. Amateur and I had never considered it before. I made it to the Olympic Club, which was neat.”

Then in 2008, a buddy threw out a suggestion to Harvey.

“He said, ‘You should try the U.S. Mid Am’ and I said ‘What the hell is a Mid Am?’ That’s 100 percent the truth. So, I tried that and I qualified for that and the rest is history.”

Mid amateur golf is competition among golfers 30 years and older.

With just one CGA tournament this year – even though it was a victory – Harvey will likely see his six-year reign as CGA Player of the Year end in 2018 with Clemson sophomore and Raleigh native Doc Redman winning the U.S. Amateur and finishing second in the Western Amateur.

Like most things, the laid back Harvey is OK with that.

“It has gotten kind of ridiculous anyway,” he said. “I am even tired of seeing me.”

Harvey is the salt of the earth, having learned work ethic as a youngster, picking up golf ball after golf ball at his father’s driving range.

“From the time I could carry a 5-gallon bucket around we hand-picked balls every single night,” Harvey said. “If it got dark your butt better be at the range. If I was late or was playing basketball with buddies my dad didn’t cut me any slack. We had a 5-gallon bucket in one hand and half a broom stick with a coffee can bolted to end of it. It was crazy. I don’t even know how to guess how many millions of golf balls I picked up.”

About as crazy as Harvey’s trek through golf’s “fun zone.”

“My whole existence was hanging out there with my dad, playing golf on the weekend with him and his cronies and hearing all the stories,” Harvey said. “He was so supportive; never really tried to push me into the game, he sort of let it be and kept it fun for me, kept it in perspective. When it came to golf it was like ‘it’s available if you want it.’ And I wanted it. My dad was an extremely good golfer and did so many things, and I always put pressure on myself to do things that he had done – to be as good as him. He used to tell me ‘I’ve played golf my whole life and I know you can do it.’ He always believed in me and kept my confidence going. If not for him I definitely would not have done anything that I’ve done up until today.”

“Scott has proven he is the real deal both on and off the golf course,” added Nance.