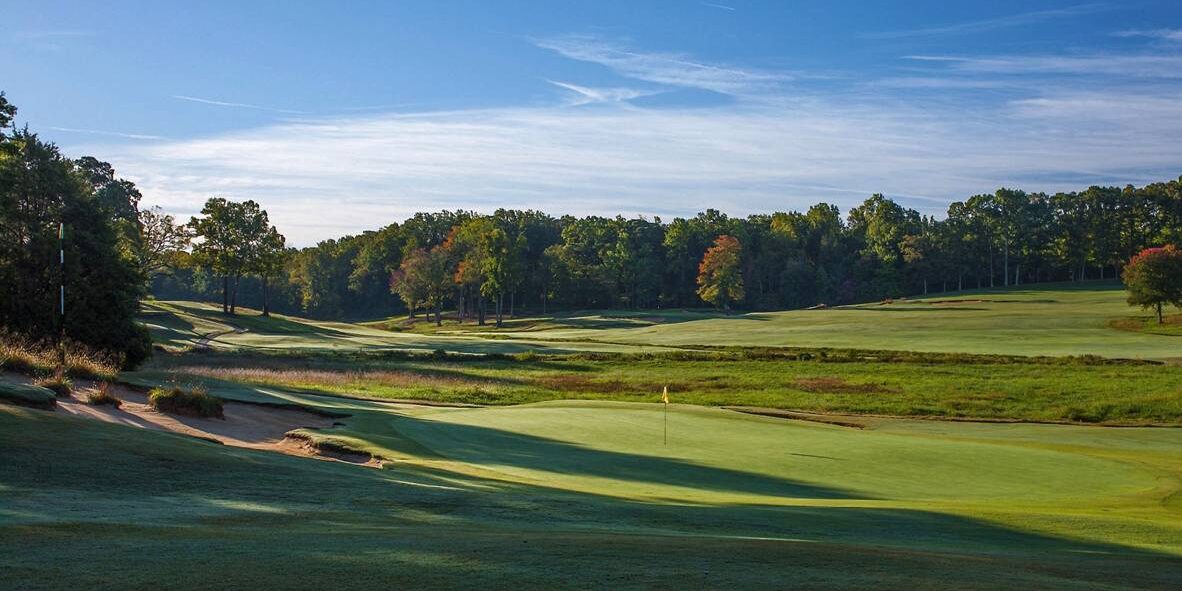 With more than 650 courses scattered across 100 counties from the Blue Ridge Mountains to the Outer Banks, the competition among North Carolina golf layouts can be intense.

Any private, public or resort course that claims “they don’t care” about being ranked among the state’s best is, well, lying.

Rankings from national and statewide golf publications have always been a big deal, with such notoriety leading to increased memberships for private clubs, more rounds for daily fee courses and additional prestige for resorts among the golf traveling public.

That’s what makes the recent moves up the rankings by Old Town Club in Winston-Salem noteworthy. A classic 1939 Perry Maxwell design, the private club located within a 9-iron of the Wake Forest University campus began garnering attention from raters after a 2013 renovation from the architectural firm Coore & Crenshaw.

The most recent accolade for the club came in September when Old Town was ranked No. 59 in the United States by GOLF Magazine. The only other North Carolina courses ranked in the top 100 were Pinehurst No. 2 (10th) and Wade Hampton (58th).

In April, Old Town was also ranked 23rd in Golfweek Magazine’s Classic list – that was good for second in the state behind Pinehurst No. 2 (14th).

“Both Bill Coore and Ben Crenshaw have long hailed Perry Maxwell among their favorite classic architects,” said Dunlop White III, the longtime golf chairman of Old Town. “For one, Coore grew up playing Old Town at Wake Forest University, while Crenshaw grew up playing Austin Country Club, another Maxwell design in Texas. Given their early exposure to Maxwell, both have long revered their predecessor. So naturally, when you layer two of the best designers today on top of one of the best architects of the Golden Age genre, you have the foundation for something unique and again very special.”

The physical size and artistic detail of the restored design features help set Old Town apart. The layout possesses 80-acres of fairway — almost three times more fairway than the average course, and nearly twice as much as 36-hole complexes nearby. Today, in more old-school tradition, one single swath of fairway connects holes 4, 7, 17, 8, 9 and 18 successively without interruption of rough or vegetation.

“There’s nothing else like it around here,” White said.

Coore & Crenshaw also exposed the drama of the setting with the removal of thousands of trees and overgrown vegetation.

“The visual transformation is mind-boggling as breathtaking panoramas have been recaptured across the heart of the golf course in every direction, reclaiming its big-boned presence and links-like feel,” White said. “At places, golfers have rediscovered interior views measuring nearly one mile long.”

Maxwell’s naturalistic bunker style, containing jagged-laced edges, have been restored, and the club made a decision to return to native riverbed sand in lieu of white commercial selections to complement a more natural rugged appearance.

“While our pre-restoration bunkers were buffered by turf maintained at rough height, our restored bunkers are buffered by closely-cropped turf at fairway height,” White said. “The tight mowing pattern lures golf balls like a magnet, and as a result these bunkers play exponentially larger than ever before. Few courses outside Melbourne’s Sand-belt and the British Isles maintain their bunkers in this fashion. Again, unique and special!”

In addition, the signature Maxwell green contours are always a draw, including Old Town’s double green, which has been doubled in size to more closely resemble its original source of inspiration at The Old Course at St. Andrews, home of seven double greens.

“Besides our green undulations, what distinguishes us the most is our tilting fairways that produce a variety of stances and hanging lies,” said Phil Thomas, Old Town’s next club president. “And when we’re lucky enough to play it firm and fast, the fairways literally come to life, generating a variety of bounces that help make the course so fun and entirely different from one day to the next.”

Joe Passov, architecture editor for GOLF Magazine, just released an hour long podcast about the importance of design variety (https://soundcloud.com/golf_podcast/the-top-100-courses-in-the-world). He claims that nothing stimulates interest in golf courses more than design variety. Toughness and length alone no longer equate to greatest, he says.

As for trends in the rankings, coastal links courses and inland courses with sandy soils that play firm and fast are carrying the day in the rankings. In addition, tradition and heritage are also relevant as classic golf course courses restorations are soaring up the charts.

“The new buzzwords in golf design today are variety, memorability, character, mystery, interest, fun, quirk and charm. Coore & Crenshaw has reinvigorated our golf course with many of these elements,” White said.

“The (2013) restoration has really moved the needle for us in all the national rankings and has also proven to be a big time game changer in attracting new members from around the state and region,” added White. “It has enabled us to develop a strong national membership as well. Our Maxwell golf course has always been an attraction, but when paired with a Coore & Crenshaw restoration, it has culminated in widespread interest and appeal — far greater than we could have ever imagined.”