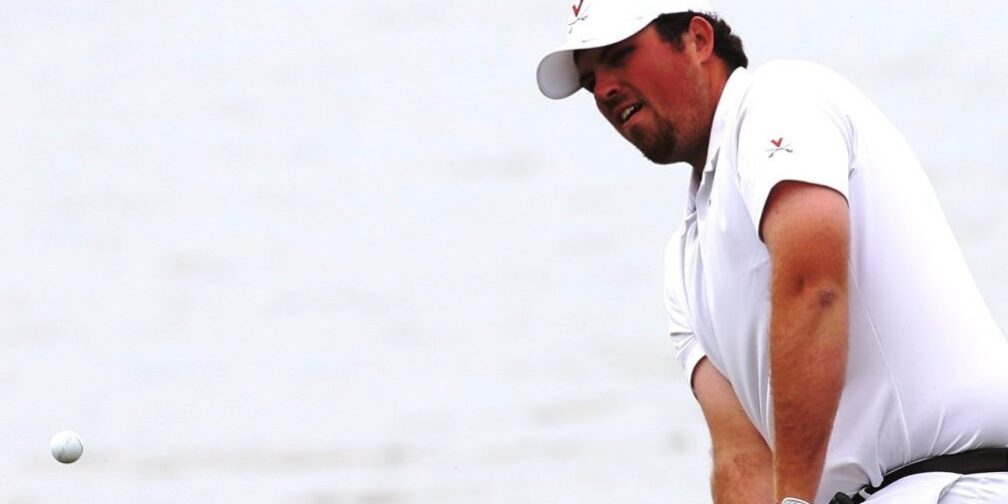 Growing up a few miles from Willow Creek Country Club in High Point, Thomas Walsh was always the biggest kid on the block.

“On the golf course, I was able to overpower people,” says Walsh, who made the varsity golf team at Westchester Country Day School for coach Adam Schwartz as a 7th grader. “It was a big advantage when it came to sports.”

But as golfers mature heading into college, Walsh soon found out his 6-foot-5, 230-pound frame wasn’t as much of a factor as swing speed or golf course management.

The University of Virginia junior headed into the 2018 ACC Championship in mid April at Old North State Club without a collegiate victory under his belt.

That all changed in dramatic fashion as Walsh posted the best 54-score in the 65-year history of the ACC Championships to win the league’s individual title at 16-under par, shooting a final round 68 to hold off reigning U.S. Amateur champion, Clemson star and Raleigh native Doc Redman.

“I’ve felt very confident about my game for a long time, but I had always had that white elephant on my back of not getting a win,” Walsh says. “This win proved to myself that I can get it done, even with all the pressure of being out in front and having the tournament in my home state, and having all these guys come after me. It solidified what I already knew — that I was good enough to win and that I could perform under pressure. This gives me no doubt that I can win.”

Others, including prep coach Schwartz, knew this day would come for a player of Walsh’s ability and mental makeup.

“I always knew that Thomas was going to be big time,” Schwartz says. “Honestly, I think this is just the beginning for him. He is definitely going to be a pro golfer and he has the mind, and the skill, the drive and the work ethic to be very successful.”

“I’ve been coaching at Westchester for 18 years and I remember him in kindergarten, he was always bigger and just stood out,” Schwartz says. “When we would be over at the course practicing Thomas would come up and want to challenge the older guys, take them on in putting contests, things like that. He has always been very confident, always been extremely skilled.

“He’s like a cartoon character, with his big, red cheeks and being hilarious all the time. He’s got a big personality. No matter where he is he’s not afraid to talk to people, and honestly, I think talking and communicating is one of his ways of dealing with nervousness. I would compare him to a Lee Trevino.”

Walsh laughs at the comparison, since his golfing life has changed during a transition from high school star to trying to keep up with the growing talent base in college golf.

“It is a little different now, I used to do that in high school because golf was more of a leisure activity,” Walsh says. “It’s a different level out here; these guys are out here for business.”

“I have been coming to Old North State for about 10 years watching my friends and one of my idols, Drew Weaver, play golf,” Walsh says. “I have probably walked that golf course 20 times.”

“I am not surprised by this … and trust me Thomas is going to win some big-time tournaments in the next 15-20 years,” added Schwartz.