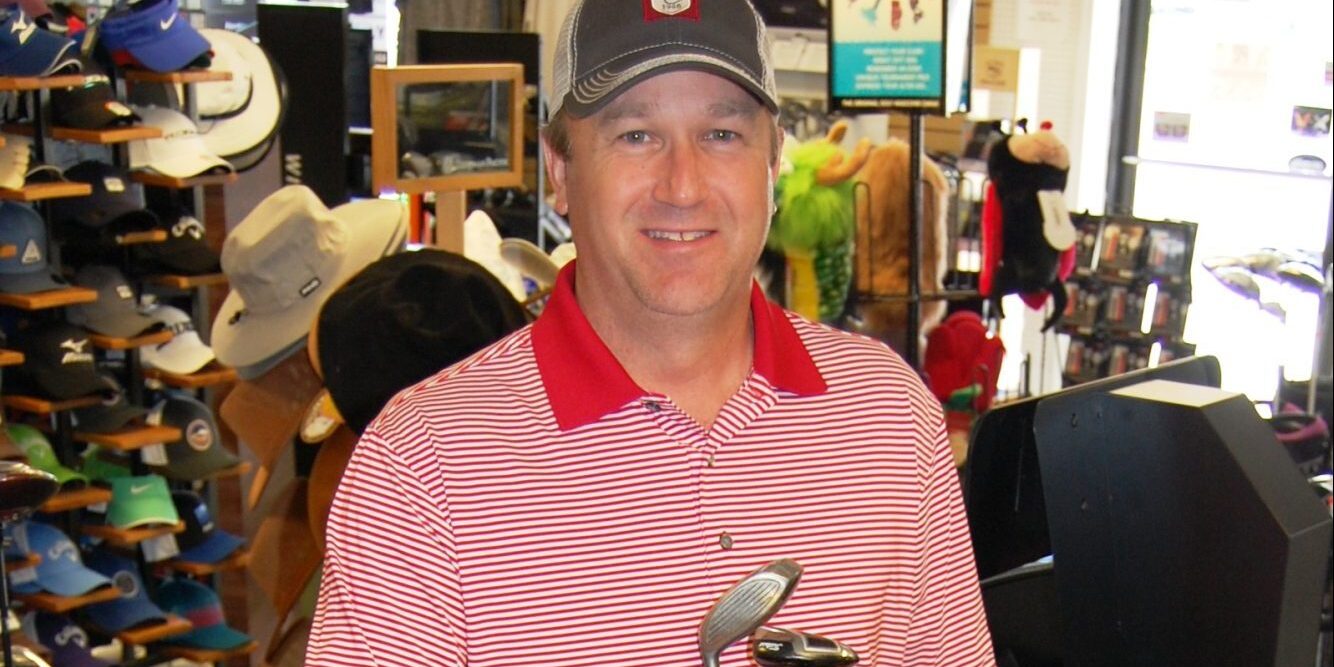 The oldest town in Yadkin County features quite a golfing throwback.

Barry Byrd, the owner of Tee Time Golf & Repair Shop in Jonesville, has amassed what can best be described as a “picker’s paradise,” with more than 400 sets of used irons, 500 putters, and 1,000 woods and hybrids to fit your swing, game and  budget.

Golfers – some of them well-known like Wake Forest men’s coach Jerry Haas, LPGA player Marcy Hart and long driver competitor Justin Young — come from miles around to the 6,000 square foot space to spend hours sifting through used clubs, and to chat up a good game with Byrd and the locals.

“It’s like antiquing with golf clubs,” Byrd said. “I do feel like a throwback in a way because whenever I first started playing golf on a rainy Saturday morning we tried to find a place like this to go to, to meet a couple of buddies. Seems like these kinds of places aren’t there anymore. You can say it is part of the times or whatever, but it’s sad that the small golf businesses have a tough time making it. But I will hear it a dozens of times every year with people saying, ‘I wish we had a shop like yours back home.’”

Byrd is able to more than make it – sort of thriving amongst the big box stores because of location. His Jonesville shop is centrally located, about 45 minutes from Winston-Salem, Hickory, and Galax, Va. To the west is rural North Carolina and mountains.

Byrd’s start in the golf business was about as unconventional as his present store. He never played competitive golf, just took up the game his senior year of high school with a friend. He then began making clubs on his own while working for his parent’s wholesale plumbing business.

Byrd, also the golf coach at East Wilkes High School, opened his first golf shop down the road from his current location in 2002, a 600 square foot building that he quickly outgrew. He’s now on his third location that features retail, repair work and launch monitor studio for fittings. He also has plenty of storage for all his used clubs, which he hauls up to the massive Hillsville, Va., flea market every Labor Day.

“Yes, I do keep a large selection of used clubs at my shop,” Byrd says sheepishly. “That’s something that your Dick’s Sporting Goods or Golf Galaxy isn’t going to do. They are mostly trade in clubs. It’s a big business with the cost of golf clubs going up each year; somebody getting into the game is not going to spend $500 on a driver.”

If you are picking out a used club or two you can tee it up in the back of the store or walk to the local driving range right behind Tee Time Golf, owned by one of Byrd’s friends.

“The best part of the business is meeting people from different areas,” he said. “When we go to the Labor Day flea market I will see somebody up there that I’ve never met and then they come down to the shop. The relationship part of it is so good.”

And recently, Hart was in the shop in the morning looking through some clubs, Haas was in that afternoon and Byrd’s staff also built a club for Young that same day.

“I went home that night and told my wife that it’s kind of funny that I had an LPGA player, a PGA Tour player and a Long Drive guy in my shop all in an 8-hour day in Jonesville, N.C.,” Byrd said. “It’s funny because somebody is always asking: ‘Is that Marcy Hart? Is that not Jerry Haas?’ Jerry comes up to look at golf clubs and he loves talking to the people. He comes in like any other customer, to look at golf clubs.”

Haas shops at Tee Time Golf on a variety of levels, including buying range finders, head covers and shirts for himself and his Wake Forest men’s golf team.

“Yeah man, that’s one of my favorite places,” Haas said. “My son is 13 and plays on the high school team as a 7th grader and I’ve bought three sets of clubs from Barry. I just trade in and trade out. I often go with my friend Doug Bland, who has worked at Wake Forest for 40 years, and he’s a club machine, so I told him I have to take him to this place. Now we go about once a month.”

Haas said Tee Time Golf reminds him of his childhood, of growing up in a small town in Illinois and visiting a similar golf shop, where you could put your hand in a big jar and grab as many tees as you could hold for $1.

“Going to a place like Tee Time Golf is just fabulous,” Haas said.