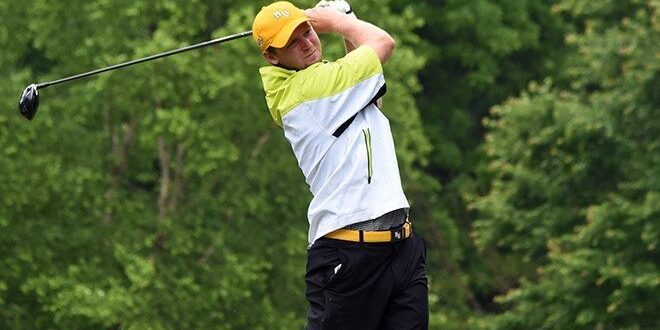 Aaron Purviance had time to reflect on his college golfing career in late May as he drove cross country with his brother Austin, heading to finish up an internship at the Jim McLean Golf School at Red Ledges in Park City.

Utah is a far piece from Methodist University in Fayetteville, but then again the former Reagan High School all-conference player sure came a long way in his collegiate golfing career.

Purviance’s college golfing experience was a complete circle – with team national champions in his freshman and senior year – and a whole bunch of trials and tribulations in between.

In fact, Purviance, this year’s captain on Methodist’s 12th national title team, almost passed on going to the Division III powerhouse, instead having his heart set on attending a larger school.

“I go to a lot of the North Carolina tournaments to look at kids who have contacted us and every once in a while you’ll see a kid in a group that kind of gets your attention. That was Aaron,” said coach Steve Conley. “In this particular case, Aaron had sent some stuff to us and I kind of liked what I saw and then started looking at the tournament results. I kept seeing his name and saw some positive things, so I contacted him.

“He kind of wanted to enjoy the large college experience with going to football and basketball games,” Conley added about the recruiting process. “I mentioned to him that he could always come to a small school and then go to those big schools up the road like Carolina, Duke and NC State on certain weekends. I kind of let it go and said, ‘let me know if you change your mind.’”

Less than a month later, Purviance called Conley and made a visit to the Fayetteville campus.

“I didn’t know anything about the school’s professional golf management program until I went down there,” Purviance said. “And I wanted a chance to win a national championship so it turned out to be a pretty good decision going there. It has been a good ride.”

And a wild ride at that.

After starting his first college event as a freshman, Conley requested that Purviance improve his short game to crack the lineup again. He took the coach to heart, beating the face off a new sand wedge in two months. His sophomore year expectations coming off a national title team got the best of Purviance and his swing suffered. An ankle injury his junior year also slowed his progress.

And while Purviance, nicknamed Big Hoss, hasn’t been one of Conley’s stars for four years he has been a steady player, and an even more important influence on this year’s younger golfers.

He began the final round of this year’s national championship at Grandover Resort tied for 13th, but had a poor back nine and finished 34th to close out his college career.

“With his personality and passion for golf, I don’t know that there has been a day that has gone by that Aaron doesn’t find a way to practice something,” Conley said of Purviance. “He just has an awesome spirit about him. He is just a phenomenal guy, just awesome.”

And while Purviance says he’ll try his hand at pro golf after graduating in December, his likely profession will be on the teaching side.

“There are a lot of routes I can try to go,” Purviance said. “Besides winning the national championships my best memories are all the competitive games with all my golfing buddies at Methodist, like playing barefooted with our shirts off, wild things like that.

“College definitely goes by pretty quickly when you’re having a good time.”