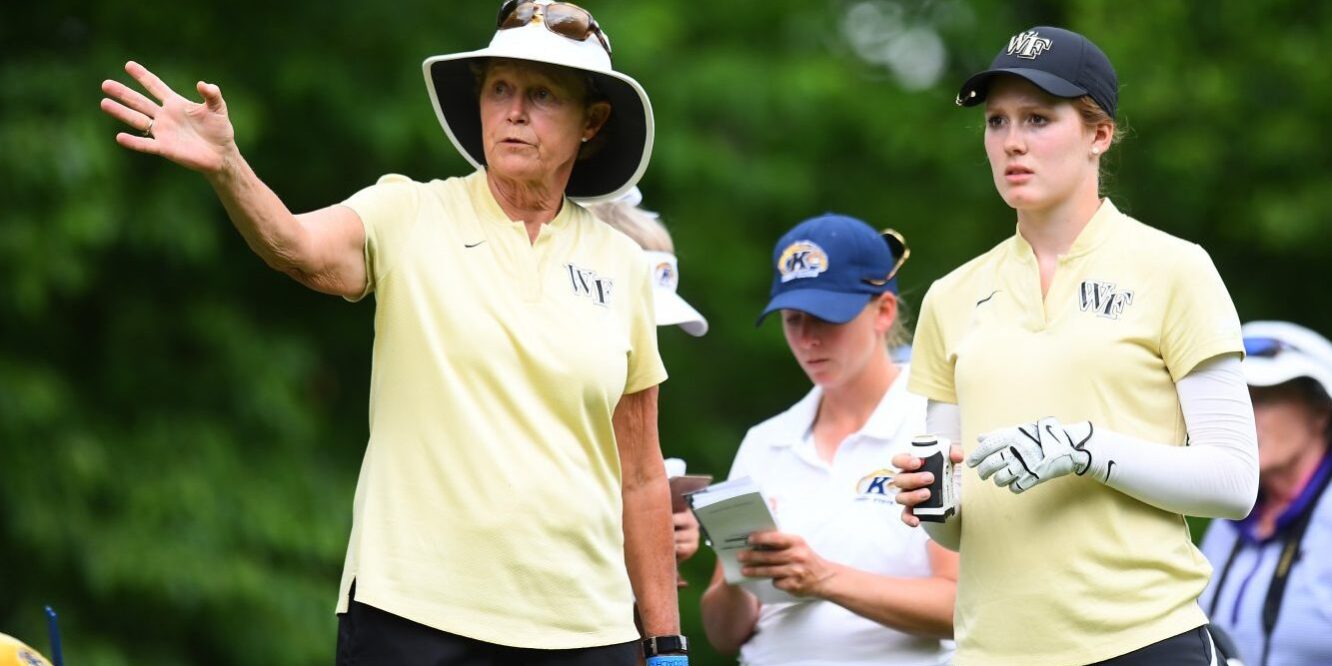 Longtime Wake Forest women’s golf coach Dianne Dailey said she plans on knocking the rust off her clubs in retirement.

“I’d like to actually play a little bit more golf, just because I haven’t had a chance to play much,” she said. “Maybe if I can get my game back in shape I’ll try to qualify for the (U.S.) Senior Open next year in Pinehurst.

“I’d also like to do some community service. I felt like I haven’t been around enough to give enough back to the community. I’d love to get involved more with The First Tee and maybe do some other things in the community.”

Just one day after Jennifer Kupcho capped the best season in Wake Forest history with her victory at the NCAA Championship, Dailey announced her retirement from a position she has held for 30 years.

“Oh my gosh, it has been a whirlwind,” Dailey said of the week’s excitement. “It’s just been going crazy. I can’t get to all the emails and texts that I’ve gotten so far. It’s been a nice problem to have.”

In 2010, she was honored as the Dianne Dailey Learning Center, a state-of-the-art training center for the men’s and women’s golf programs, was named for her. The center is the focal point of the redesigned Wake Forest Golf Complex.

“It has been fun,” Dailey said of her long and storied career. “I’ve enjoyed all the teams I’ve had. It’s the students that really make the job fun — trying to get them motivated and tying to help them get better, trying to learn about them and be as good a teacher and mentor as I can. It has been a wonderful, memorable — and quick — 30 years.”

During Dailey’s three decades of leading the program, the Demon Deacons won 30 team titles, 39 individual titles, four ACC Championships and qualified for 15 NCAA Championships. A four-time ACC coach of the year, Dailey led the Demon Deacons to conference championships in 1994, 1995, 2009 and 2010. Her four titles rank second in the history of ACC women’s golf coaches.

Dailey took over the Wake Forest program in the summer of 1988. Wake Forest would win at least one team title in 18 of her 30 seasons at the helm of the program, highlighted by a school-record five victories during the 1994-95 season.

In 1993, Wake Forest made its first appearance at the NCAA Championships, finishing seventh. It was the first of four top-10 NCAA finishes for the Demon Deacons, highlighted by a third-place finish in 1995.

Since the NCAA established the current system of regionals to qualify for the NCAA Championships in 1993, Dailey has led Wake Forest to a regional berth every year.

Dailey coached 28 All-Americans, 39 All-ACC selections, five ACC players of the year, four ACC freshmen of the year — and now the 2018 NCAA champion. Kupcho became the first player to win an individual title the year after a runner-up finish since Arizona’s Susan Slaughter in 1989-’90.

“It was phenomenal to see Jennifer win with her teammates cheering her on,” Dailey said. “It could not have been scripted any better. It was like a storybook finish.”

When asked where Kupcho ranked among her all-time greats, Dailey didn’t hesitate. “I think she is the best,” she said. “She’s broken all the scoring records. She won a national championship. She’s won seven tournaments in her career and I’m sure she’s going to win more. She’ll be on the Curtis Cup team. She just keeps racking up accolades and honors. And it’s well deserved because she is a very, very talented young lady.”

In addition, Emilia Migliaccio, the 2018 ACC freshman of the year, was named a second-team All-American. Migliaccio posted a 71.79 stroke average, a Wake Forest freshman record and the third-best in program history.

Dailey’s 30-year tenure is the second longest for a Wake Forest coach, trailing only Jesse Haddock’s 32-year tenure leading the Demon Deacon men’s golf program from 1960 to 1976 and 1978 to 1992. Haddock passed away in mid-March at the age of 91.

“(Coach Haddock) was one of the people responsible for me coming here,” Dailey said. “I used to come by and see him once or twice a year when I was playing on the Tour to get some ideas about sports psychology and the psychology of the game. He was really one of the very first sports psychologists without a degree. He really knew how to motivate people and he knew how people should be thinking on the golf course. He was amazing. “

Dailey is a 1971 graduate of Salem College and in 1975 received her master’s degree in education from North Carolina State.

The winner of the 1966 Kentucky High School Championship, Dailey later captured the North Carolina Amateur in 1977 and 1978, in addition to the 1978 Carolinas Amateur. She was runner-up in the North-South Amateur in 1977.

A 10-year veteran of the LPGA Tour, Dailey joined the professional ranks at the age of 30. Her career-low round of 67 was recorded at the 1981 Boston Five Classic. The following year she posted her career-best finish, a solo third at the Express Sun City Classic and went on to have her most successful season on Tour.

In 1984, she found herself at the top of the leader board after two rounds of the du Maurier Classic and the Jamie Farr Toledo Classic. Both resulted in top-10 finishes and led the way to Dailey’s second-best year on Tour with nearly $40,000 in earnings.

In 2001, Dailey was named the LPGA Coach of the Year and was also inducted into the National Golf Coaches Association Hall of Fame. She served as the president of the NGCA as well as a chairman of the NCAA Golf Committee, heading up the NCAA Championships and setting policies for collegiate golf.