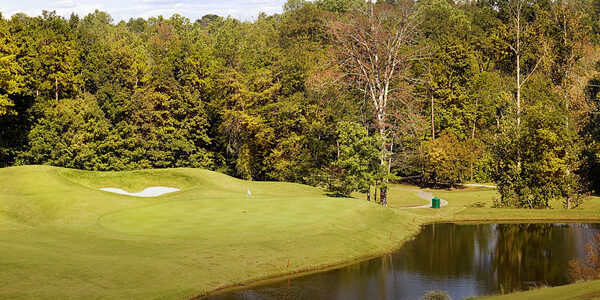 Stoney Creek Golf Club is closing June 4 for a conversion of its bentgrass greens to Champion ultra-dwarf bermudagrass. The course’s targeted reopening date is Aug. 17.

“The members are excited about it,” said John Kolls, Stoney Creek’s director of golf. “When we reopen, we’ll basically be reopening as a whole new course.”

Kolls said Stoney Creek has had problems like those experienced by other area courses with bentgrass greens. The greens can’t stand up to the summer heat and get stressed on a regular basis, drying out and suffering regardless of the degree to which they’re watered.

Kolls noted that numerous other area courses – Sedgefield Country Club, Starmount Forest Country Club and Greensboro Country Club – have all undergone similar conversions of their greens in recent years. The greens of Duke Golf Club, where Kolls was head professional before moving to Stoney Creek, have also been converted from bentgrass to bermudagrass.

Some in the golfing industry have compared the conversion of bentgrass greens to bermudagrass to the change from metal to soft spikes. It’s a change becoming so common that one day golfers will look back and find it hard to remember that it wasn’t always this way.

Kolls said leaders at Stoney Creek made the decision in January to convert their greens.

“We struggled last summer with the bentgrass,” he said. “The greens, they basically just shut down in the summer. There’s a better alternative out there, we feel.”

The work at Stoney Creek will be done largely by Shapemasters, a company based out of Southport that specializes in new golf course construction and renovations. According to the company’s website, they’ve completed more than 145 projects in the United States and abroad since their founding in 1993.

Kolls said sprigs for the Stoney Creek work will come from Champion Turf Farms of Bay City, Texas. The company, in business more than 50 years, is known for its no-till sprigging brand of green conversions.

The process allows for changing the grass variety on a putting green without reconstructing the existing surface. The result is that the green contours remain as they were before, but with a uniform stand of Bermudagrass.

Stoney Creek opened in the mid-1990s and underwent a major renovation in 2010.

The conversion of greens won’t be the only work that takes place while the course is closed. The practice putting green will be expanded to almost 6,000 square feet and a bulkhead will be added at the 18th hole to protect the green and prevent erosion, which has been a problem.

Kolls said that with the course closed for two months, the fairways should be plush by the time the facility reopens in mid August.