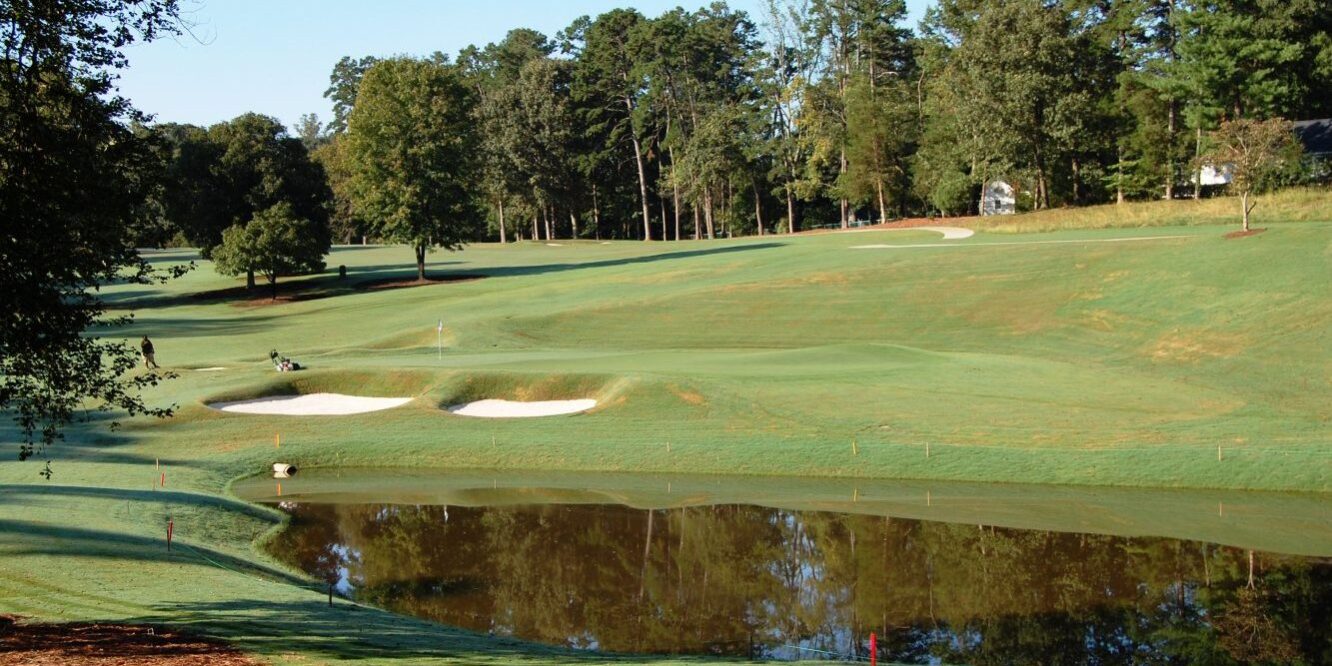 Kris Spence worked on historic Forsyth Country Club about the same time he was doing the same to fellow Triad area layout Sedgefield Country Club, creating quite a Donald Ross return to form for both private clubs 12 years ago.

The restoration project of the Ross design was the main focus back then for Forsyth as most of the original nuisances were lost over time, but Spence returned this year to coordinate several other course improvements, including a switch from bentgrass to bermudagrass on the greens and bunker remodeling.

“We just had a member-guest and all the feedback has just been fantastic,” said Forsyth head pro John Faidley.

The club reopened in mid September after being closed for the Spence work in July.

“Forsyth had a pretty tough summer a few years back and that got them thinking about putting in bermudagrass greens, which as we all know now are at the highest performance level during the golf season,” Spence said. “They finally pulled the trigger this summer.

“As with any golf course, once you do that you really have to look at the greens hard because some of the areas that may have been hole locations with bent greens may not be OK for the Champion Bermuda,” added the Greensboro-based architect.

GreenScan 3D was hired to scan greens alongside Spence, and it was decided that some areas of the greens on Nos. 1, 6, 9 and 15, needed tweaking.

“There were some hole locations where I had intentionally created 12 years ago, these really sort of treacherous little corners, you know when the club wanted to have a real high end tournament and they wanted ultra strategic hole locations. I put them at the upper end of the slope for the bentgrass, which is a little too high up for the bermuda,” he said. “Those four greens we took the sod off of and adjusted the greens prior to converting it over. No. 9 was the most comprehensive as we pretty much tweaked that whole two-tiered green. Once all that was done we reset the collars, which is pretty standard, to make sure the surface drainage is all good.”

The ninth fairway was converted to Zoysia grass a few years ago, and Spence did the same to the first hole this time around.

“And we tried to soften the bunkers a little bit right at the toe of the grass slopes,” he said. “Forsyth has these really bold and dynamic set of Ross bunkers and has some really authentic depth, with some bunkers out there 4-6 feet deep. They wanted new sand in there but they also went with the Better Billy Bunker system to enhance the drainage and enhance the performance of the bunkers.”

The only real design change by Spence came on the par-3 14th hole.

“There is a little pond short of the green that was a little closer to the green than what I thought it should be and what Ross generally crossed water hazards,” Spence said. “It had an old railroad tie bulkhead wall that to me was not keeping with a 1920s golf course and I always wanted remove that wall and roll the grass down. But at the same time we needed to improve the pond’s overflow structure, so we rebuilt the dam, took the wall out and brought the distance between the green and the hazard closer to the tee and that way we could expand the approach of the green.”

“It’s definitely a different hole,” Faidley said. “And taking some trees out around that hole also changed it visually. There is now a little bit of a wow factor.”

Converting to bermuda greens, Spence was also charged with creating better sunlight around the putting surfaces.

“Taking out some trees really opened up some vistas and kind of gave the golf course a bigger look,” Faidley said. “That has been really well received.”

“We probably took down as many as 50-60 trees,” added Spence. “And we created a brand new short game facility. The old short game facility I had previously designed was part of a short course concept, and they decided they weren’t going forward with that so we created a short game area that had more of a multi-directional use. The old one was basically two little par-3 holes that had they gone through with the original design would have been a par-3 course. But we doubled back and re-configured that short game area for a little better member use, a lot more variety.

“It was time to do these projects,” added Spence. “Remember, golf courses are living, breathing items.”