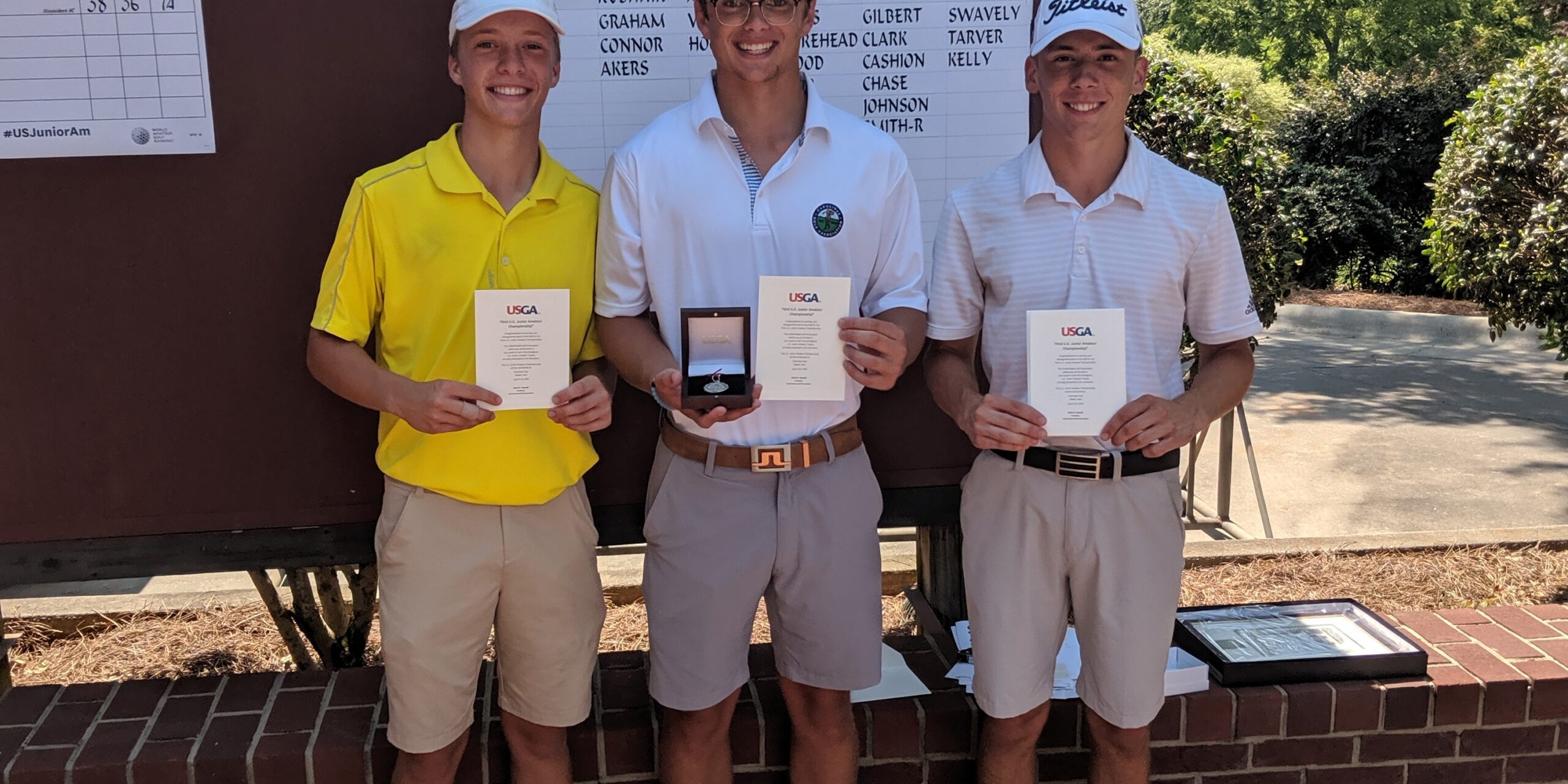 Kayla Smith graduated from Burlington Williams High School in mid-June. Yet, before heading east to Ocean Isle for a beach week with her friends, Smith had a business to attend to in the western part of the state.

Three days after receiving her high school diploma, Smith became one of a trio of Triad golfers — Zach Brown of Bermuda Run and Nicholas Mathews of Mebane were the others — to qualify for the prestigious U.S. Junior Championship in July.

Smith, 18, fired a 2-under-par 70 on June 17 to earn medalist honors in the sectional qualifier at Blowing Rock Country Club. She advances to the U.S. Girls’ Junior Championship on July 22-27 at SentryWorld in Wisconsin, where she’ll be one of 156 competitors at the Robert Trent Jones Jr.-designed course.

“I’ve been running around a lot the last couple of weeks,” Smith said. “But I knew if I qualified, it’d be worth it.”

Brown, an incoming freshman at High Point University and Reynolds High School grad, and Mathews, a rising senior at Eastern Alamance High School, who has verbally committed to play at North Carolina State, both shot 68 to advance out of sectional qualifying at Salisbury Country Club. Charlotte’s Drew Hackett, who will play golf at UNC-Wilmington, also shot 68 to advance.

They will compete in the U.S. Junior Amateur Championship on July 15-20 at Inverness Club in Toledo, Ohio.

Smith said she had barely thought about beach week until a nearly two-hour rain delay stopped qualifier play late in the day. At the time, she was 1-over through 10 holes.

While Smith waited in the clubhouse for the rain to pass, her friends texted her with a few photos from sunny Ocean Isle.

After busting her drive on the 14th hole — an uphill par 5 that doglegs slightly right — she hit a 7 iron from 165 yards into a blind green for a tap-in eagle. “When it came off my club, I knew it was going to be good,” she said. “It was right on line with where I was aiming.”

“There was really a momentum shift for me after the rain delay, which obviously helped in my favor,” Smith said. “I was able to get some spin on the ball, which really helped.”

Another tap-in birdie on the finishing hole earned Smith a spot in her first USGA national championship. “I’m not trying to have a lot of expectations heading into it,” she said. “Obviously just stick to my game and when I get there get a feel for the course and my game. We’ll see how it goes. I’ve never been to Wisconsin, so it’s nice to get to travel a little.”

Smith was the 3-A individual state runner-up three times during her high school career. Last year, she had a top-5 finish in the North & South Women’s Amateur Championship in Pinehurst.

“Playing against professionals in front of galleries was a great learning experience for me,” Smith said. “It was beneficial to see the life of professionals and see where their games are.”

For the past 10 years, Smith has worked primarily with Heather Hauk, the director of instruction at Alamance Country Club.

The athletic Smith has always been a long hitter. So lately, the duo has been focusing on improving her play around the greens. “I’ve definitely put in a lot of work with my short game,” Smith said. “It’s improved and I want to keep improving it.”

Smith will start her collegiate career as a preferred walk-on at UNC in the fall. “I’m very excited,” she said. “That’s where my dad went to college and we grew up as a Tar Heel family and definitely went to football and basketball games together. It has been my dream to go there, so it’s awesome that’s happening. I love the Carolina coaches. They’ve been very supportive.”

Meanwhile, at the boy’s sectional qualifying at Salisbury CC, Brown said he could not have gotten off to a worse start after his opening drive found what is called the course’s “death bunker.”

“I hit it straight in it, had to chip out and make bogey,” Brown said. “On the next tee, I told myself, ‘you only have one more shot at the U.S. Junior. Just try to make as many birdies as possible.”’

Brown, who was an alternate for the 2015 U.S. Junior during the summer after his eighth grade, proceeded to reel off three consecutive birdies to right the ship.

Mathews, 17, said he was able to take advantage of some local knowledge at Salisbury CC. “I was excited that the qualifier was being played there,” he said. “I had played there a couple of years ago and was fortunate to go watch my sister play at an event there a couple of weeks prior, which allowed me to refresh myself with some course knowledge.”

Mathews recorded an eagle on the par-5 third hole by chipping in. He then birdied the par-4 11th hole after capitalizing on an approach shot to 10 feet. Another birdie was recorded on the par-5 15th after getting up-and-down from a green side bunker. His card was clean with the exception of a lone bogey.

“Just a lot of solid golf,” Mathews said. “I was hitting really solid golf shots to my targets and placing the ball really well. I made a few key putts throughout the round.”

In March, Mathews gained entry through a five-man playoff into one of the top amateur golf events for high school students in the country, the Dustin Johnson World Junior Golf Championship. He also earned a top-5 finish at the Donald Ross Junior Championship in Pinehurst in late 2018.

“I feel good about my game,” Mathews said. “Since summer started, I’ve been working really, really hard on improving all facets of my game. I felt like I was at a good place with my game, as well as mentally going into the event.”

Mathews said he is excited about the U.S. Junior Amateur Championship next month. “It’s going to be a lot of fun and a great experience,” he said. “The way I feel about my game right now, I’d love to make it a good performance.

“I want to continue playing in junior events, as well as some amateur events, and keep preparing for college golf and keep moving up in the rankings.”

For Brown, July is shaping up to be a particularly busy month. He turned around two days after the U.S. Junior qualifier and captured the 2019 Carolinas Junior PGA Championship at The Club at Irish Creek to qualify for the National PGA Junior Championship at Keney Park Golf Course in Hartford, Conn., on July 30-August 2.

Brown shot 68-67 to finish at 135 (-7) for the championship. Sai (Aaron) Pha of Bluffton, S.C., finished tied with Brown to claim the two qualifying spots. After two playoff holes, Brown came out on top to claim the Boys Carolinas Junior PGA Championship title.

After struggling with his putting the past two years, Brown was steered to an arm-lock method of putting — similar to the style used by Webb Simpson and Matt Kuchar — following the state high school championship. “Since then, I’ve played awesome,” he said.

Brown committed to the University of Georgia in 2015, when he was 14 years old, but changed direction after being offered a scholarship by High Point University coach Brady Gregor.

“I’m a homebody,” Brown said. “(UGA) would have been too far. I’m much happier going to High Point. I’m best friends with (rising HPU sophomore) Brandon Einstein. He’s a great player and has been like a big brother to me.”

Brown said his new college coach has pushed the right buttons and helped motivate him to his recent success.

“He’s a great coach and he believes in me,” Brown said of Gregor. “He gives me a pep talk, it seems like, before every tournament round. I guess that’s working.”