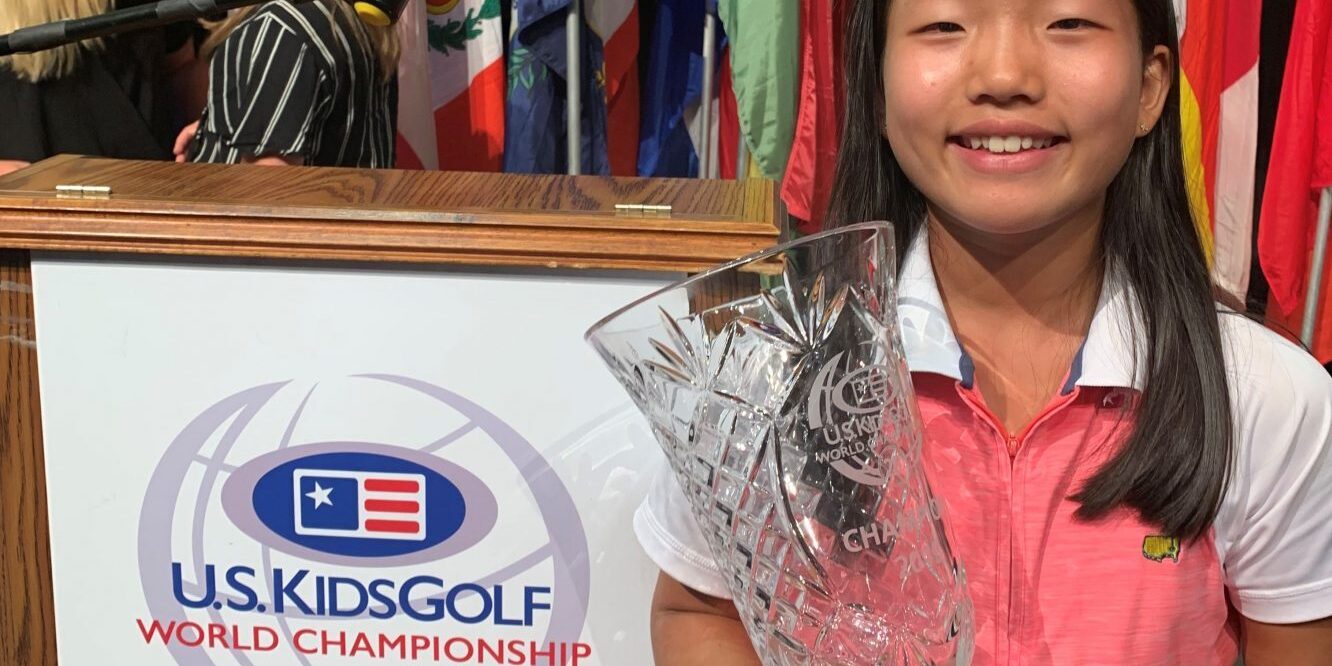 At the still-tender age of 11, Ellen Yu has participated in and won more tournaments than most golfers accomplish in a lifetime.

But it doesn’t take her but a moment to rank the importance of her win in the U.S. Kids Golf Foundation’s World Championship, played the first week of August at Pinehurst No. 6.

Ellen fired rounds of 69, 77 and 70 to claim a four-stroke victory in the tournament’s Girls 11 division.

“It’s probably the biggest (tournament) I’ve won,” said Ellen, a High Point resident. “There was lots of competition, from all over.”

Ellen is the daughter of Julia and Kale Yu. She got her start playing golf about four years ago when her father took her to a driving range to hit a few balls.

Kale, a religion professor at High Point University, had observed his daughter’s strength and hand-eye coordination, and thought it might transfer to excellence at the game of golf.

Her father was right. Nowadays, despite standing just 4-foot-10 and weighing only 95 pounds, Ellen is capable of hitting a drive better than 200 yards. Her chipping and putting games are equally impressive.

Ellen competes regularly in area Peggy Kirk Bell Girls Tour junior tournaments and this past April participated in the Chip, Drive and Putt national finals at Augusta National Country Club as a prelude to the Masters.

Ellen’s goal is to qualify for the LPGA Tour. Her favorite player currently on that tour is Lydia Ko, a Korean-born New Zealand golfer. Ellen is also a fan of Tiger Woods.

Ellen said her favorite course is Pine Needles Golf Club in Southern Pines. Closer to home, she spends much of her time at Colonial Country Club in Thomasville where she has a youth membership. Julia said it’s not unusual for her to drop her daughter off at Colonial, confident the golf staff and other members will help keep an eye on her.

“She has lots of supporters, obviously,” said Julia, a family medicine specialist with Novant Health.

Julia and her husband home school Ellen, a decision that came at the request of their daughter who wanted to be able to spend more time playing golf.

“Ellen asked so she could be more dedicated (to the sport),” Julia said.

She and her husband obliged, though they make sure Ellen keeps her priorities in order, completing her school work in addition to spending as much as seven hours a day at the golf course.

“She is very, very motivated,” Julia said. “We never have to tell her she needs to practice more.”

The possibility of burnout doesn’t seem to be an issue, as Ellen maintains that golf for her remains nothing but fun. She’s made many acquaintances through golf and is quick to note, “Most of my friends are golf friends.”

Julia said she and her husband strive to see that their daughter (she has three older siblings) remains well-rounded, involved in activities other than sports. She’s active at Mt. Zion United Methodist Church in Trinity where her father is a pastor and volunteers with The Pathways Center, a shelter program that provides temporary housing for the homeless. It’s part of Greensboro Urban Ministry.

Since June, Ellen has been receiving golf lessons from Robert Linville at Precision Golf School at Bryan Park. Before that, Mike O’Briant, retired director of golf at Colonial Country, had been teaching her. Julia said Mike Parker, director of the Peggy Kirk Bell Girls Tour, recommended that she and her husband sign Ellen up for lessons at Precision Golf, that Linville might be able to help take her game to the next level.

Linville said that in the brief time he’s been working with Ellen, he’s been nothing but impressed.

“She’s obviously a really good player,” he said. “She has a tremendous determination and mindset. She’s very focused.”

Linville agreed with Julia that Ellen’s desire to one day rank among the world’s golf elite doesn’t come from her parents egging her on. This isn’t a case of a child pursuing a sport out of parental pressure, he said.

“It’s not her parents pushing her,” Linville said. “This is what Ellen wants. That’s the reason it’s fun for her.”

He said he could see her dream of qualifying for the LPGA Tour one day being realized.

“She doesn’t back away from the moment,” Linville said.