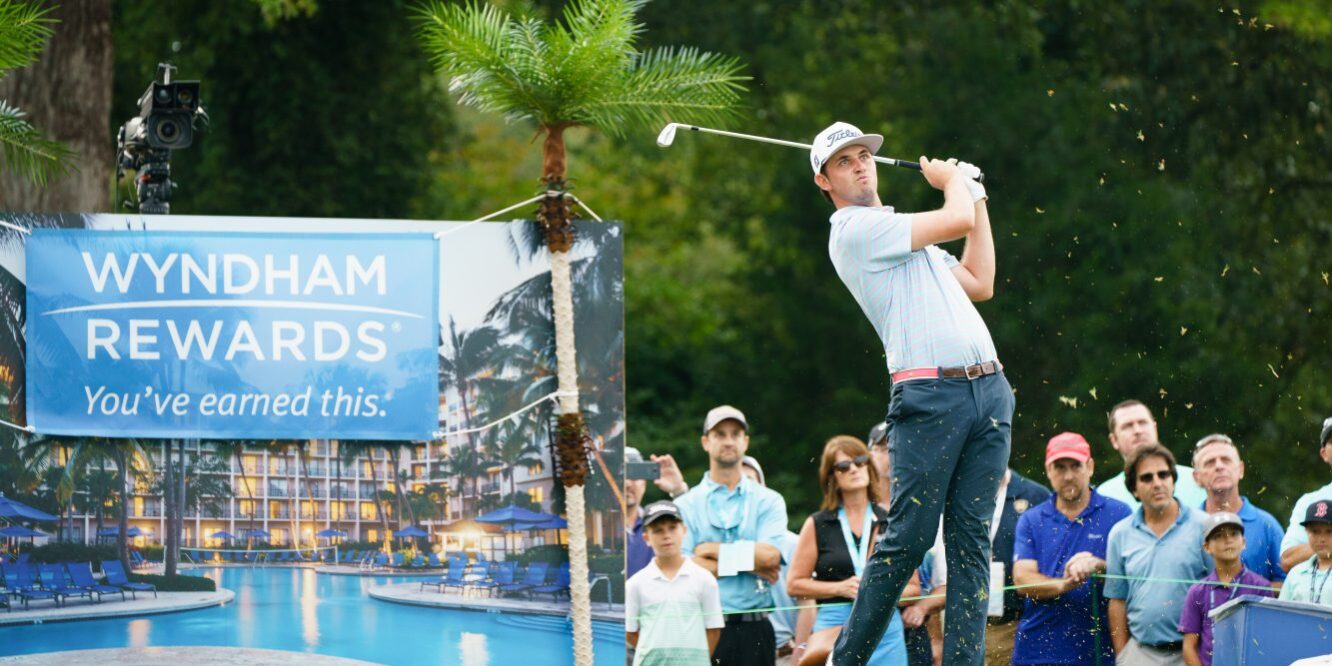 Given the way his career is arching, he might consider changing that nickname to “Mr. Clutch.”

Poston’s Twitter profile says the Postman is, “Open on Sundays,” and he certainly was during the final round of the Wyndham Championship in early August. Bolstered by a supportive throng of family, friends and fellow Western Carolina University alumni, the Hickory born-and-bred product wrapped up a bogey-free week by firing a final-round 62 at Sedgefield Country Club to hold off Webb Simpson by a stroke.

Poston’s performance equaled the lowest mark for a final round in tournament history, set by Davis Love III at Forest Oaks Country Club in 1992. He became the fifth North Carolina native to win the tournament in its 80-year history, joining Raymond Floyd, Scott Hoch, Love and Raleigh native Simpson.

Entering the tournament ranked 164th in the world, Poston, 26, moved up to 27th on the FedEx Cup points list and earned a two-year exemption on the PGA TOUR, and an invitation to next year’s Masters, among other perks.

Ultimately, Poston’s impressive late-season run ended when a tie for 16th at the BMW Championship left him two spots out of the top 30 advancing to the Tour Championship.

“I haven’t had that many bogey-free rounds this year,” Poston said. “To be able to do four in a row is pretty special, and finish it off with a 62 on Sunday is pretty awesome. To be able to do it here in North Carolina with a lot of friends and family — I don’t think I could have drawn it up any better.”

“This is a big day, no question about it,” said Western Carolina coach Tim Eckberg, who was in Poston’s gallery, along with former coaches Gorham Bradley and Bryant Odom, and a dozen or more former Catamount golfers. “To be here for it, following J.T. around … I’m speechless.

“We all believed this was coming — he’s just so good. But to do it here in North Carolina with all of these people around him, I’m just so proud of what he accomplished.”

The Postman’s Wyndham performance marked the culmination of a lifetime of clutch golf. After graduating from Western Carolina, Poston immediately turned professional in August 2015, but didn’t compete in a Web.com Tour event until late spring of the following season, when he Monday-qualified for the United Leasing & Finance Championship.

On the 72nd hole of his debut event, Poston was facing a 20-yard chip shot when the horn sounded announcing a weather delay. A half-hour later, Poston returned to the same spot and chipped in for eagle, allowing him to finish inside the top 25 and gain entry into the next event, the Rex Hospital Open in Raleigh. There, Poston finished third and he continued his magical run the rest of the season all the way to earning his PGA TOUR card.

“In his senior year at regionals at (UNC’s Finley Golf Course) we needed a birdie on the last hole to get into the NCAA’s, and J.T. said he would do it,” said Odom, one of Poston’s coaches at WCU and now the head coach at Kennesaw State. “He makes that birdie putt and we go to the NCAA’s. It was unreal.”

J.T. stands for James Tyree. “I’ve been J.T. since I was born,” he said. Poston’s father’s, James Tyree Sr. — who goes by Ty — along with his mother, Cheryl, and brother, Bailey, all watched anxiously from outside the ropes during the Wyndham Championship.

When J.T. was 3, “Pa Doc,” as Poston calls him, cut down a persimmon 5-wood, pried off the sole and took the weight out to create his grandson’s first club.

Poston said he inherited an ideal role model in his grandfather, who played in two U.S. Senior Amateurs and two British Senior Amateurs, and has shot his age more than 600 times.

“I remember growing up, he just hit it — similar game to myself,” Poston said. “Nothing flashy off the tee, but he kept it in front of him and his short game was unbelievable. That was kind of how I learned to play golf was watching him at a competitive level, learning from him.”

A talented all-around athlete, Poston grew up honing his skill at Lake Hickory Country Club — like Sedgefield, a Donald Ross-designed course. In 1999, when he was 6 years old, Poston watched Payne Stewart capture one of the most memorable U.S. Open golf tournaments ever at Pinehurst. That moment lit his fire for the sport.

“I played a lot of basketball and baseball and golf,” Poston said. “I played some tennis when I was younger, and kind of got away from it for a while. Now I’d say tennis is probably one of my favorite sports to play, along with basketball, away from golf.”

Poston was a key member of the 2009 state champion golf team as a sophomore and captured the state individual title twice.

Poston also owns a couple of North Carolina High School Athletic Association (NCHSAA) records that include shooting a 63 at Foxfire Golf Resort in Pinehurst — the lowest 18-hole round ever shot in a state championship. Poston appeared in the iconic “Faces in the Crowd” section of Sports Illustrated in 2011 after winning his second straight state title and setting a scoring record along the way.

“His tremendous work ethic, focus, and determination were on full display (at Sedgefield),” Hickory HS Coach Ben Hale said. “J.T. is a tremendous person who has an unbelievable desire and passion to achieve at the highest level in all areas of his life. It was my honor and joy to coach such a fine athlete. His steady composure and patience throughout high school golf was always a sight to behold.”

For many, the question is: after an historic high school career, how did Poston end up at Western Carolina in Cullowhee — a small town situated between the Great Smoky and Blue Ridge mountains, where the students outnumber the regular population?

During his high school years, Poston competed in mostly state and regional tournaments, and he wasn’t heavily recruited by any big-time collegiate golf programs. His efforts to play his way onto a few Atlantic Coast Conference schools never panned out.

“Western wasn’t my first choice early on in the recruiting process,” Poston admits. “N.C. State recruited me, but it just didn’t work out. I didn’t have the greatest junior resume so a lot of the scholarship spots were already taken. I would have been a walk-on and I was looking for a scholarship.”

A visit to Cullowhee led to a scholarship and a place Poston could call home. “I enjoyed the atmosphere around Western,” Poston said. “It was so laid back. The coach at the time (Carter Cheves, currently the associate head coach at James Madison University) was somebody that I had known for a little while. I liked the guys on the team a lot. It was a good fit, and it was somewhere that I knew if I kept playing like I had been, I would get a lot of playing time and be able to build off it.”

Around Cullowhee, Poston was fond of wearing fancy socks, mostly of the Western Carolina purple and gold variety. His Catamount teammates called him “Jimbo.”

Using the college snubbing as internal motivation, Poston rewrote the WCU record books. Odom describes Poston as “a late-bloomer.” He said his top player relished the opportunity to match up against top programs — ACC and SEC schools that overlooked him in the recruiting process — to put on a show. “Since then, he’s always wanted to prove to these guys: ‘You know what? You missed out on me,’” said Odom.

A two-time All-American and three-time PING All-Region selection at Western Carolina, Poston claimed six individual medalist honors from 2011-2015 and finished as the school’s all-time leader in career stroke average at 71.73 over 135 career rounds. He finished inside the individual top 10 all four years at the Southern Conference Men’s Golf Championship, twice finishing first. Poston was a four-time All-Southern Conference selection.

In the fall of 2013, Poston became just the second WCU men’s golfer to top the GolfStat individual rankings at No. 1, joining his predecessor Matt Cook with that honor. Poston competed in the NCAA post-season regional field three times in 2013, 2014 and 2015, and became the first Catamount men’s golfer to ever advance to the NCAA Championship field in 2015.

“Carter Cheves was my first coach at Western; he’s the one who recruited me and gave me a shot. I’ve always been thankful for him giving me that opportunity,” Poston said. “And Bryant Odom was a big influence, more so for helping prepare me to play in the pros. He kind of helped me narrow my focus down and just let it happen.”

A lean 6-foot-2, 165 pounds, with a long and languid swing that generates plenty of power, Poston’s game is not flashy. He does the majority of his damage from 130 yards and in, dialing in wedges and draining clutch putts. When he flirted between top 20s and missed cuts earlier in the season, Poston’s confidence never faltered.

“He just has that flowing swing and acts like nothing bothers him,” Odom said. “Next thing you know he’s shooting 67, wearing you out.”

Poston still works with the same swing coach, John McNeely, who his grandfather chose for him around age 7. In route to Greensboro for the Wyndham Championship, Poston went to see McNeely at Diamond Creek Golf Club in Banner Elk, where McNeely is managing partner.

“We were working a little bit on his takeaway,” McNeely said. “That’s kind of all we work on when we get together. It helped him turn away from the ball a little bit better and turn it over a little bit, create that right-to-left ball flight, which is what he likes to see.”

“He just gave me one little thought that clicked, and it started working right away,” Poston said.

Poston’s Wyndham Championship victory was extremely popular, not only around North Carolina, but across the PGA TOUR.

Patton Kizzire waited behind the green for Poston to roll in the testy 4-footer for par on 18, while Denny McCarthy, was doing his best to get back to Sedgefield in time. “I’m in the middle of a laundry cycle at the hotel,” McCarthy said with a laugh. “And I just left my clothes in the wash right now. I wouldn’t miss this. He’s been a great friend to me the last couple years and he deserves this so much. He’s always shot me a text when I have success, or when I’m down.”

Keith Mitchell, who won The Honda Classic earlier this season and rooms with Poston in a house in St. Simons Island, Ga., said he was trying to calm himself in front of the TV. Poston had been there waiting for Mitchell when he won The Honda, and Mitchell badly wanted to return the favor. He even tried to rent a plane to get to Greensboro in time to watch the back nine.

Alas, Mitchell was told the weather was too poor. “We tried everything we could,” he said.

But the happiest beneficiary may have been tiny Western Carolina University and its golf team.

“Western Carolina golf just took a huge step,” Eckberg said. “This is great for our program in so many ways. He is such a class act and I couldn’t be prouder of him and what this does for him. Our team is going to come in this fall more fired up than ever before. It’s just like when he got his PGA TOUR card — it elevates our program and the way we’re viewed that we’re able to develop players like this. It gives our players an extra drive; and it gives our alumni that pride everyone’s feeling right now.