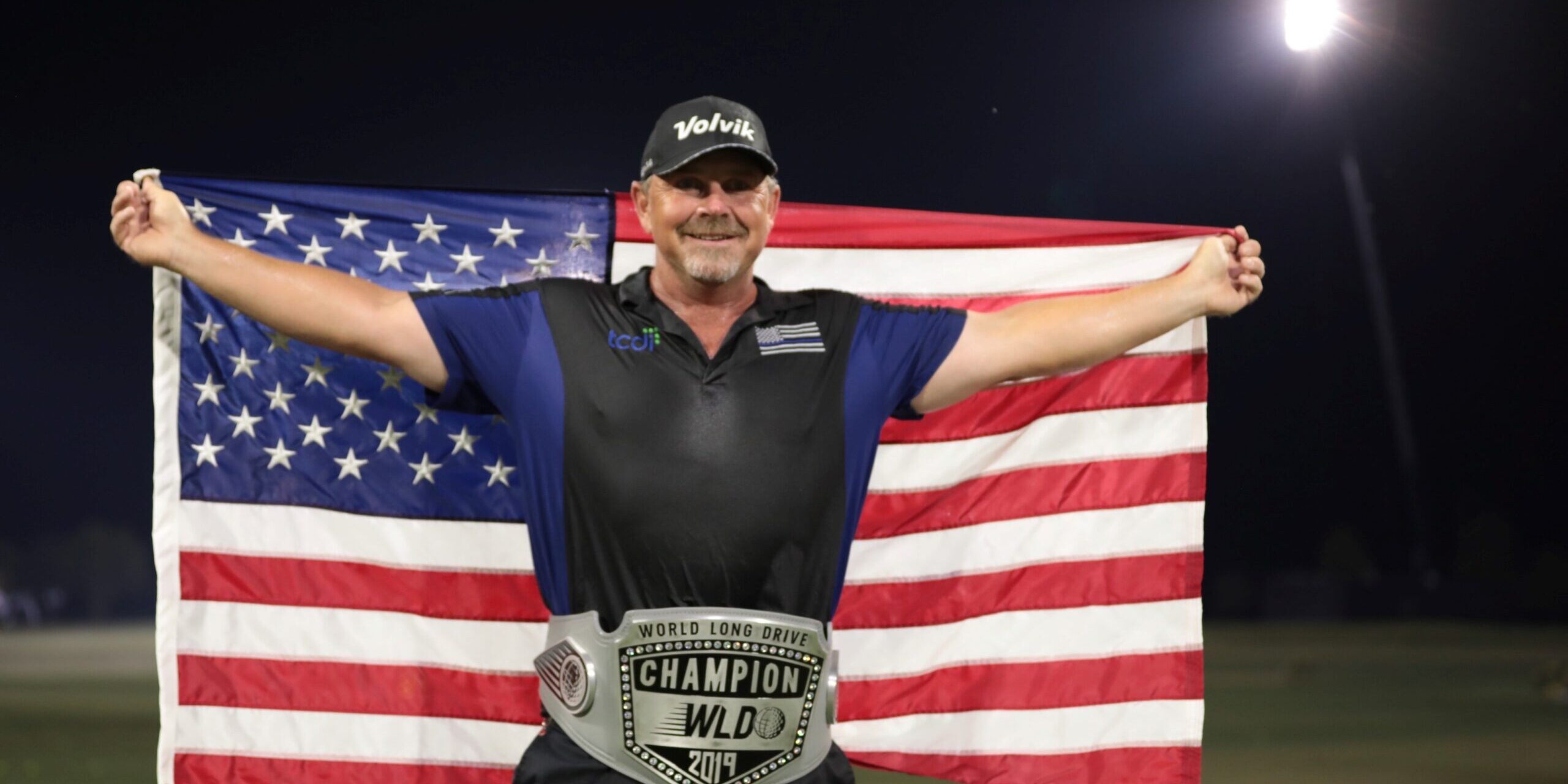 Jeff Crittenden was in a tight spot.

The Long Drive champion known as “Critter” to friends and fans was down to his last two attempts in the nationally televised finals of the World Long Drive Championship Masters Division in Oklahoma in early September.

He was battling defending world champion Eddie Fernandes — and the two combatants were … well familiar with one another.

In 2017, Crittenden knocked Fernandes out during the World Championship semifinals and went on to earn his first world title.

This encounter had the unmistakable feel of a rubber match.

Back in his adopted hometown of Greensboro, Crittenden’s personal fitness trainer and Precision Golf School colleague Ted Bonham followed the drama on The Golf Channel. Midway through the final round, Bonham saw a look come across his friend’s face.

“I saw something in his eyes,” Bonham said. “He had this look on his face that he was definitely, definitely going to hit a good one. He had found something or he had felt something.”

Despite the immense pressure, Crittenden approached his second-to-last drive of the tournament with confidence. “I hit my third ball in the grid, but I hit it poorly and I was only 10 yards behind (Fernandes),” he said. “I knew I didn’t have to swing hard, I just had to square the club. I started making some adjustments on the fly and finally squared one up on my seventh ball.”

Crittenden’s deciding bomb blew 10 yards past Fernandes’s best effort on the fly, and ended up 388 yards in the twilight. “As soon as I hit it, I knew I won,” Crittenden said. “I actually thought it was going to go further than it did.”

For Crittenden, 48, the title validated his world Masters championship from two years earlier.

“One thing people have always told me, ‘If you win one, you could get lucky, you could get hot. If you win two, it’s probably not luck,’” he said. “So, I feel a lot better about this second win than I did the first. It solidified that the first one wasn’t a fluke.”

Crittenden, the head instructor at Precision Golf School, once hit a tournament drive 491 yards. In a mile-high competition in Colorado several years ago he cracked one 465 yards — but lost by a single foot. His club builder, Precision Golf’s Kevin McCallister, currently has him competing with a MOI driver with a 6.5-degree loft, and a House of Forged XX-flex shaft.

Despite all his successes, even Crittenden’s most disappointing moment eventually turned “Critter” into one of the sport’s household names.

The 2014 World Long Drive Championship was contested for the first and only time as a $250,000, winner-take-all competition.

Crittenden won his quarterfinal match by one yard, and then upset former world champ Joe Miller in the semifinals, again by one yard.

After Crittenden’s final attempt, officials had to go out on the grid to hand-measure the two drives, while the two competitors waited nervously and numbly on the tee.

Flagg had clipped Crittenden by 13 inches to take home the whole enchilada.
But “Critter” became the Cinderella story of the event, earning himself a legion of new fans with his gritty showing in the final, which was televised live by Golf Channel.

With a quick laugh and an infectious personality that belies his imposing, 6-foot-2, 225-pound frame, Crittenden has always been able to make light of even his most stinging defeats.

“He’s a unique individual,” Bonham said. “Jeff is always, always a happy-go-lucky guy. He’s always in a good mood. You never see him upset. He doesn’t let too many things get to him. He’s a pretty big guy, pretty well-built guy. He’s got a lot of power. But he really is just a big teddy bear.”

Nevertheless, Bonham said Crittenden is one of the hardest workers he knows.

“When he latches on to something he really wants to do, he puts in all his effort,” Bonham said. “We’ll train for an hour and I will kill him. But later that afternoon or that evening, he’ll go back to the gym and do some workouts that are different than what we did that day.

“He’s very dedicated to the sport and to being really good at his craft. His attitude is unbelievable and his work ethic is second to none.”

Bonham has trained Champions Tour winner and Browns Summit resident Mike Goodes. “Mike’s got that same gear in him,” Bonham said. “They both train very, very hard.”
With strength being one of the most important components of long-drive competition, most of Crittenden’s gym workouts entail explosive movements such as throwing weighted balls, pushing sleds, doing jumps and sprints —  anything that is fast-twitch oriented — along with his share of weight training.

“After I get through with Ted, I’m usually on the floor for about an hour,” Crittenden said.

Crittenden grew up outside of Philadelphia in West Chester, Pa., the youngest of seven children. His father was a retired naval fighter pilot.

“We were not a golfing family,” Crittenden said. “Golf wasn’t available, so I played baseball. Baseball was kind of mandatory.”

Not surprisingly, he was a power-slugging third baseman. “I could hit,” he admits. “That was my bread and butter. If I didn’t lead the league in home runs, it was unusual. And I usually competed for average, too.”

He continued his baseball career through college at a pair of Division II schools in eastern Pennsylvania.

In his early 20s, Crittenden earned tryouts with the Philadelphia Phillies and the Kansas City Royals. “They told me, ‘Come on down, maybe you can clean out the dugout when we leave,”’ he says with a laugh.

“Even at 175 pounds, I couldn’t run fast. My arm was OK. My fielding was OK. But I could hit,” said Crittenden, who says he started playing baseball again about four years ago in an over-35 league. “Scouts didn’t want anything to do with guys who can just hit. They wanted the runners, the guys with the big arms. They teach you how to hit.”

Crittenden said that while golf and baseball swings are similar in nature, ironically there are more former pitchers who perform well in the long-drive competitions. “Because of the mechanics and the arm length and how far that elbow can move back, and the flexibility,” he said.

Crittenden first picked up golf in college, while working at Wyncote Golf Club in Oxford, Pa. After deciding to put baseball in the rearview mirror, he was offered a full-time job by the club. “I took the job and I’ve been golfing ever since,” he said.

“When I worked at the golf course, I played every day and yeah, I was longer than everyone else,” he said. “My length could get me by some of the flaws in my game. I could hit driver pretty straight back then.”

Crittenden said he “made a little money” in the Philly section before he moved to Orlando to compete full time on several of the mini-tours.

After several years he returned to Philadelphia to help take care of his ailing mother.

“I didn’t pick up long drive until I was 34 years old and (former Wyncote GC colleague Robert Passarelli) made me do it,” Crittenden said. “He told me, ‘Jeff, you have to do long drive. You’re the longest person I’ve ever seen hit a golf ball. Here’s an 8-degree Callaway head, the 454 head, get a shaft and go do it.’

“I hemmed and hawed about it,” he said. “But I finally got a shaft and went and did it.”

In his first local competition, in Fayetteville, Crittenden ripped his first drive 378 yards and won the competition. “I’m like, ‘I am really good at this,’” he said. “I went to regional that was about a month later, and everyone hit it that far. I didn’t do very well. It took me about a year and a half to figure it out.”

Not long after, at the Metter Invitational in Georgia, Crittenden lost in the finals by 2 feet. “Then I said, ‘This isn’t long drive. I have to flite the ball. I have to use all the stuff I’ve learned playing golf to do this. I don’t have to go out and swing like a wild man. I just have to swing hard and flite it the way I need to for the grid.

That same year, Crittenden won the Cabo Classic in Mexico — the largest international event at the time — netting himself a $20,000 payday.

“I went down for a vacation and ended up winning it,” he said.

Along the way, he has worked as an instructor for ESPN, Golf Digest, Hank Haney, Jim Flick and others. “I got lucky, I really got lucky,” he said. “For a while I was trying to get out of the business but the phone would ring with more work.”

Crittenden competes in about a dozen long-drive events annually. His success has brought him not only plenty of fame in the sport, but also an active side gig: Crittenden said he will appear at about 60 corporate and charity events this year, including more than a dozen in September alone that he says will gross more than $100,000 for charities.
“I usually do a 40-minute show to start, and then go sit on a tee and have fun with people. I sit out there and make money with each group,” he said. “All the charities are great organizations and they use the money wisely, putting it back into the community. This isn’t work. It’s fun.”

Crittenden continues to compete in the long-drive Open division and remains ranked in the world Top 40. But he is concentrating more now on the Masters events. “These new kids are so fast, so good,” he said.

Bonham said Crittenden’s driver isn’t the only impressive club in his bag. “I would say his short game is better than his long drives,” Bonham said. “He can get it up-and-down from anywhere.”

Propelled by his September world championship, Crittenden isn’t ready to ride off into the sunset just yet. He recently signed a two-year renewal with Volvik golf balls, one of his sponsors since 2017.

“That’ll put me into my early 50s,” he said. “That gives me a few more years to compete in the Masters before the new guys come in.

“I think I can still show them a thing or two.”