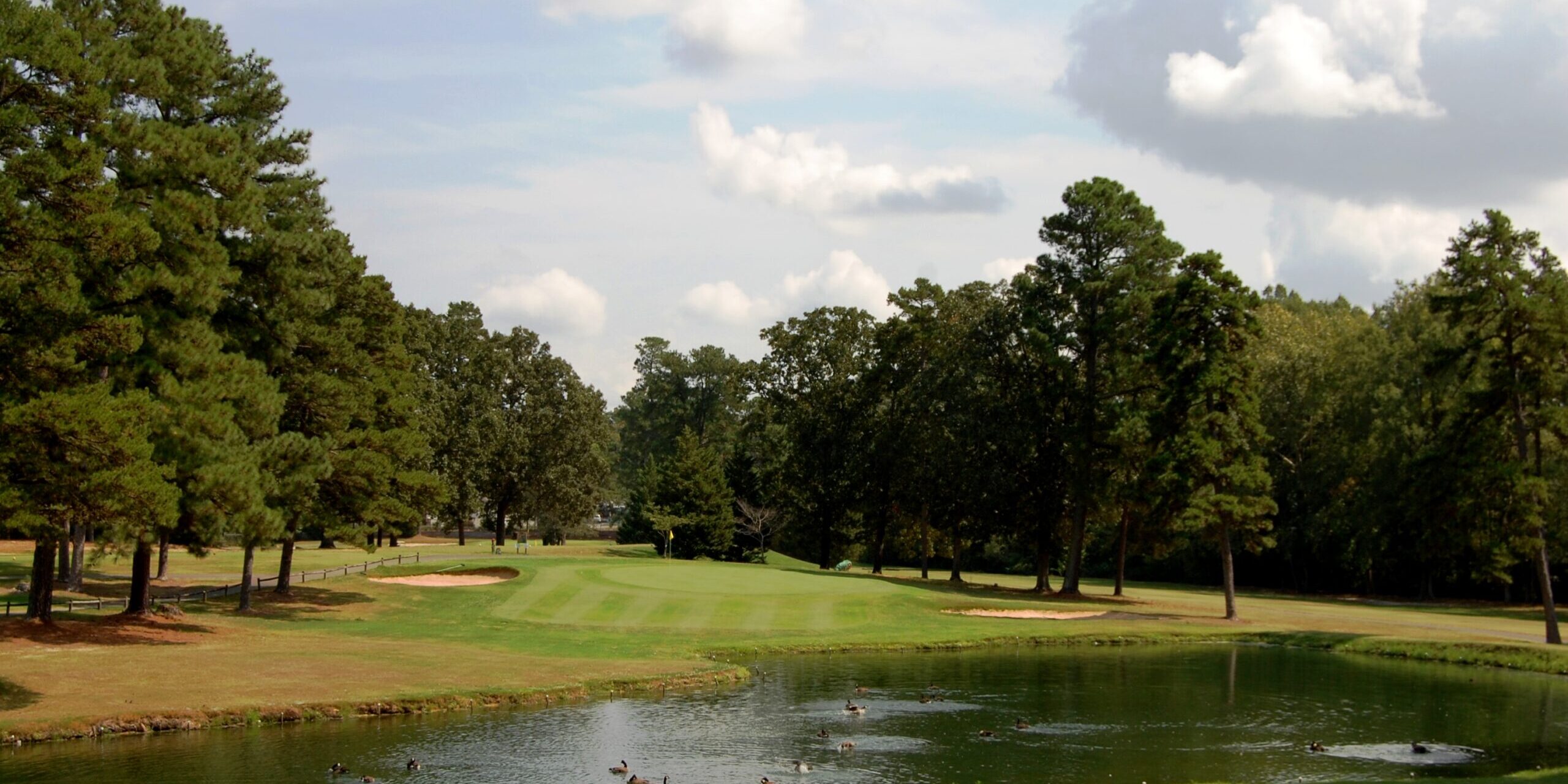 By David Droschak
Who says golf is too expensive?
For just one Alexander Hamilton you can tee it up all day at Asheboro Municipal Golf Course. In case you’re not up on your currency, that’s $10 bucks. And if you’re a local, it costs only $8.
That price point has remained in place for the last five years. And there is no per se “weekend rate.”
So much for inflation.
Before you begin to snicker and try to associate the low green fee with course conditions or layout, don’t go down that road with this Donald Ross original opened in 1935. It has a 4.6-star rating on Google, and while it looks docile at first glance, this 9-hole course will test your game better than most country clubs.
“Don’t miss a green here or you better have a great short game,” said head professional Andy Nelson.
Nelson found his way here 22 years ago and his pleasant demeanor is a large part of old-time feel you experience after you walk up the back-porch steps to a small pro shop that was erected close to 80 years ago.
A large chunk of Nelson’s play comes from seniors, who have gatherings on Mondays, Wednesday, Fridays and Saturdays.
“Seeing the same guys every day is fun for me,” Nelson said. ”I can set my watch by some of them. I know if I get here at 7 a.m. tomorrow some of them will already have the pull carts out and we’ll sit down on the porch and have a cup of coffee. I see them more than their wives probably.
“Sure, there are arguments every once in a while but we haven’t had any fights lately so we’re all good,” adding a laughing Nelson. “There is a good group of guys and then you have your regulars. And I have a lot of people stop in from Ohio on their way down to Myrtle Beach and say they just want to get out of the car a little bit and play nine holes. I tell them to ‘come on.”’
Most around don’t use a GPS to find the place, but landmarks like the old days – the course officially run by the City of Asheboro Cultural & Recreation Services is across Highway 64 from the high school and behind the BoJangles.
It sits on just 45 acres with 15 sand traps and a lake on the 8th hole that used to be just a stream but was turned into a larger body of water in the early 1990s.
The course was actually built for Ross by the WPA, a New Deal agency created by President Roosevelt that employed millions of job seekers. Almost every community in the United States had a new park, bridge, or school that was constructed by the federal agency. In Asheboro’s case, it was a Ross golf course that still remains today.
With no heavy machinery, little dirt was moved so the course hugs the natural terrain of the area, which consists of gently rolling hills and towering pines. Golfers often play a different set of tees for each nine with a “championship” length of 6,148 yards and a respectable slope rating of 133.
The course went for years without any association to Ross, regarded as one of the best architects ever and the creator of iconic and famed Pinehurst No. 2. That all changed about a decade ago, Nelson said, when a maintenance supervisor stumbled upon the plans at city hall.
“It made a big difference when the Donald Ross Society finally recognized us as a Donald Ross course,” Nelson said, pointing out the plans from the original drawings hanging on the wall in the clubhouse.
Nelson says Asheboro Municipal logs about 30,000 rounds a year, and remains a popular golf destination.
There is no logo, and no driving range. There is about 150 yards of space near holes 8 and 9 where some can warm up if needed. Bring your own balls, though, since you’ll have to snag your own practice shots.
“Heck, 85 percent to 100 percent just come out and walk on and just play,” Nelson says. “About four or five of our regulars every once in a while warm up but the rest of them just get out there and hack away, roll a few balls on the green and go.
“What I like is I can sit here in the pro shop and see the 4th green, and it’s what, about 500 yards away?” he added. “I know what’s going on just about everywhere on the golf course.”
Most walks between green and tee is 20 yards.
On the day I visited the course, a twosome had heard about the old course and driven from Salisbury to tackle it.
“This is better than I expected,” one of the golfers said. “It’s so challenging and fun.”
And some regulars rocked away in a chair on the back porch.
“It’s easy to play and easy to walk. I don’t go anywhere else anymore,” said 67-year-old Glenn Church, who has been played here for 40 years.
“Distance is not the issue; the defense of this course is the greens,” added 63-year-old Terje Karlsen. “They are so small and tricky. Overall it’s a great muni course.”
It cost 50 cents to play when the course first opened. And with likely the best deal in golf in the Tar Heel state, things haven’t changed much in 80 years here, have they?