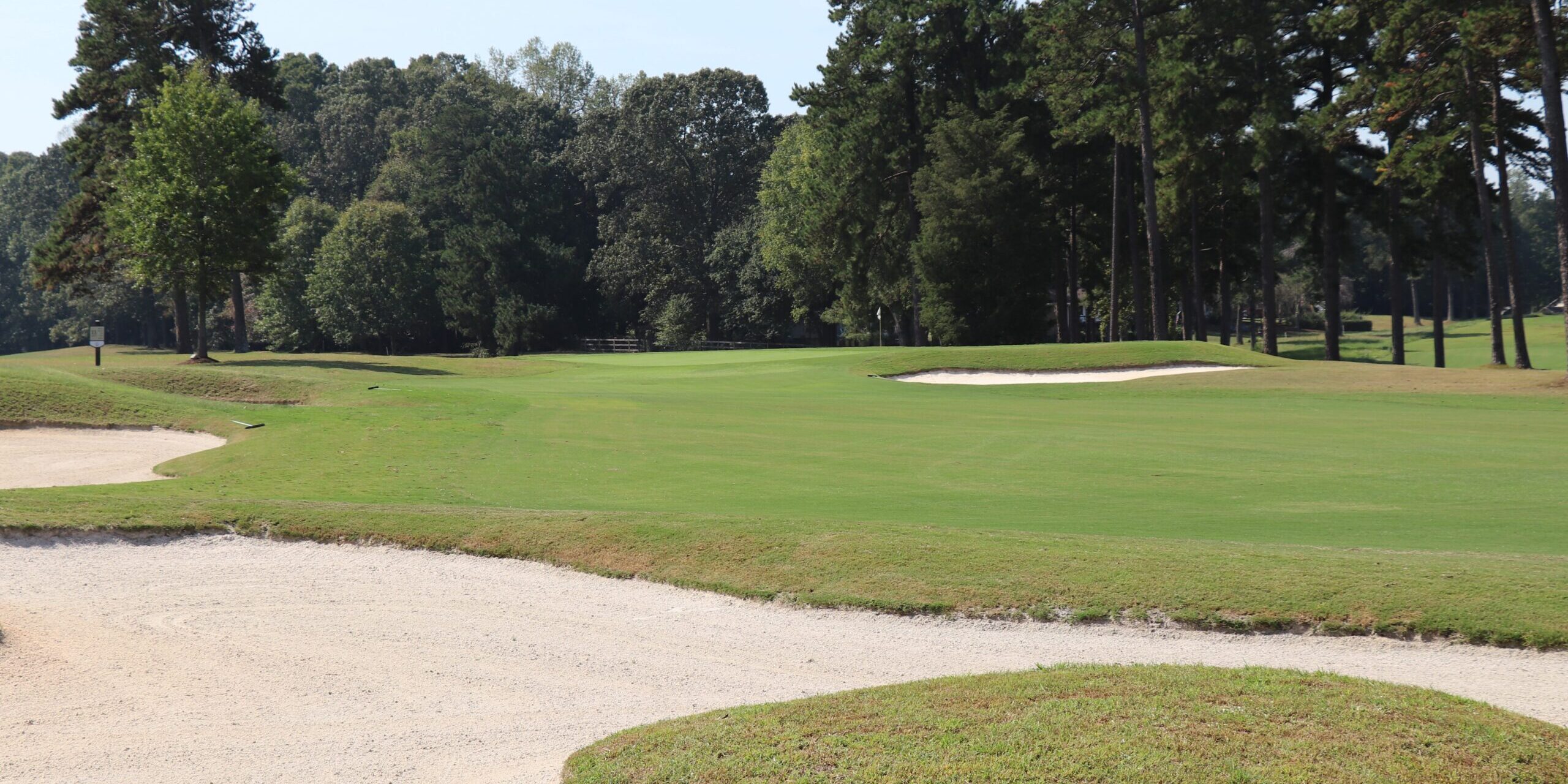 Why this time? Why, after eight management firms since the Wyndham Championship left in 2007, is Forest Oaks Country Club ready to become a major player again in the Triad golf market?

For starters, there is a new ownership group after nearly three decades. In late August, Guilford Development Group purchased the club from longtime course owner Tadashi Hattori of Tokyo-based Nisshin Corp for $1.2 million. That in itself gives the club a local voice in decisions and more skin in the game.

“When the professional tournament moved the interest from the ownership was no longer there. And they were vocal about it, too. They asked for the club to be closed multiple times,” said Geoff Dail of the new management team of Dail Miller Golf LLC.

Dail, grew up a wedge away from the Forest Oaks clubhouse and whose parents still live in the neighborhood, has a background in turf and began working at the club as a high school teenager. Meanwhile, Anthony Miller has served as the head golf pro and also a stint as general manager at Forest Oaks since 2005.

Once again, they have skin in the game.

“We’ve both been through all of these other management companies,” Miller said. “The new ownership group did their homework and had heard about us. It just seemed to make sense that instead of having another company come in and manage it again that we’ve really got the boots on the ground, that we’ve been the ones who have actually been managing it and had been through and ins-and-outs of all of them. Geoff and I thought, ‘Why don’t we do this instead of working for someone else?’”

“I don’t want to stain anyone who has been at Forest Oaks and tried to make it work but I guess the way I would put it is some of these (management) companies that came in just thought that a PGA Tour event was here for 30 years that surely the place can work, and they got in and they found out the struggle of the business,” Miller said.

“The members started losing interest when things started deteriorating and from there it got tough,” he added. “To say we were working on a shoestring budget – yeah – and a lot of times it was nothing.”

After the sale, a meeting at the outdated clubhouse, in which all existing members and those living in the expansive Forest Oaks community were invited to hear of plans to jump start the club, was in a word, humbling.

“We have had monumental support from the community and the golfing industry,” Dail said. “I can’t even think of a single negative comment that I’ve heard from the whole transition. We had a membership meeting the week after the acquisition was closed and about 400 people showed up. We held it in the ball room and it was packed, and I mean packed. There was just raving, positive responses. It was just amazing. Members from decades ago that we didn’t even know were still in the community came.”

Just words that night … but a lot of action since.

Winter is coming, but the pool and its surrounding area, which has been closed for two years, will reopen spring 2020. There are new tennis courts and pickleball courts, a new fleet of golf carts, renovated bunkers with new sand, new meeting space … and on and on.

“Their vision is to restore the facilities, which really had just been run into the ground,” Miller said of the new owners. “There has been nothing put back into them since 2005. The downstairs, since the last management group was here, basically was mothballed. It was just closed off, the locker rooms, the golf shop, everything was just moved up top.

And all has occurred over a two-month period.

“And there are ongoing investments. It is substantial,” Dail said, including two Full Swing golf simulators that are being installed for some winter fun.

Designed by noted architect Ellis Maples, Forest Oaks opened in 1962 to rave reviews. It was already known as one of the best tests in North Carolina when it was rated as a favorite PGA Tour stop by players. As the golf course matured, alterations to the course were necessary, and in 2002 the job of restoring the course was assigned to Davis Love III’s Love Design Group.

During this renovation, the fairways were re-sprigged with TifSport Bermudagrass, a strain that handles the extremes of summer heat and winter wetness better than the old local strains. As a result, the fairways are able to be cut lower and smoother than ever before. The greens were planted with a mix of A4 and A1 bentgrass, which offers a faster and truer surface than the old Penn Links variety.

Now, with new equipment in place, Dail said Forest Oaks will be able to complete with any semi-private course in the Triad and beyond. The course is about an hour’s drive from thriving western Wake County communities such as Apex and Holly Springs.

“It’s simple,” Dail said. “We are going to be one of the top golf courses in the state as we were once. We have fantastic greens, and the overall condition of the golf course is greatly improved. We’ve renovated a number of bunkers on the golf course and tightened up the agronomic program.”

More than 100 new members have joined since the sale, Miller said, and the golf course itself will remain open for public play. A full family member is $275 per month, with an individual membership $200 and a social membership $100. Any initiation fees will be waived until Jan. 1.

“Our membership structure has been simplified,” Miller said. “It was very complex with the last group that was here. There were so many different variations of what was offered it was so hard to explain, you had to have a cheat sheet.”

Unlike the last decade, the path forward for Forest Oaks appears clear … and promising.

“The best way to describe the past scenario was you had an existing property asset business that had a golden history, and you had an ownership group that was not local that had very little interest in operations, actually no interest in operations at all, so there was tremendous turnover in management companies,” Dail said. “The new owners are former members who have raised families here and been raised here and lived here their entire lives, so they want Forest Oaks Country Club to be what is can be. And it is also a business investment they feel very strongly is going to be successful.”