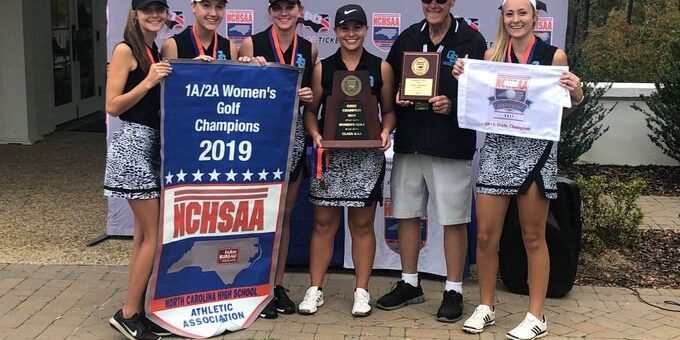 After the first day of the 1-A/2-A golf championship, Oak Grove girls coach Vaughn Black knew his team was capable of playing better, he just knew it.

The Grizzlies hadn’t played terribly on the first day of the tournament, held in late October at Longleaf Golf & Family Club in Southern Pines, and were tied with Mount Pleasant for the top spot.

But Black thought his charges were better than the 263-stroke total they put up that first day.

He called them together and issued a challenge.

“Go out,” Black said, “and play like you’ve played all year long.”

The Grizzlies did just that, bettering their first-round score by 14 shots with a closing-day 249 for a two-day total of 512. Oak Grove walked away with the championship, defeating second-place finisher Mount Pleasant by 19 strokes. Ledford finished third at 553.

“They knew they could shoot a lot better,” Black said of his team’s improvement from one day to the next. “They sort of motivated themselves.”

The win is the first state title for a team from Oak Grove, a Davidson County school in just its third year of existence.

Oak Grove’s Karli Jump showed the most improvement of any Grizzly golfer from round one to round two. Jump, a senior and Oak Grove’s No. 1 golfer, shot an unheard-of-for-her opening round 88.

After that score, Jump told her coach and teammates she was capable of shooting 10 strokes better on the second day. That’s exactly what she did, coming back in the tournament’s closing round with a 78.

In the final round, Jump’s 78 was the lowest of the Grizzlies’ three scores. As far as individual honors are concerned, she finished in a three-way tie for 11th with Ainslee Conrad of West Davidson and Jala Stamey of Hayesville.

Jump said her opening-round 88 was due to a duck hook she somehow developed on the driving range just before teeing off.

So, after the round was through, accompanied by her father, Jerry, Jump spent an hour on the range, figuring out where the hook came from and, more importantly, how to get rid of it.

“I knew I could play much better than I played,” she said.

The closing-round 78 proved as much. Jump will be attending Catawba College in Salisbury next year, the recipient of a scholarship that rewards both her athletic and scholastic accomplishments.

But Jump was hardly the only Oak Grove player to contribute to the team’s championship. The Grizzlies were the only team at the championship to qualify five players – Jump, Sarah Stewart and Kaitlyn McDonnell as a team, and Emma Maddock and Ashley Longbottom as individuals.

All five golfers contributed rounds that counted toward the state championship, an accomplishment of which Black said he’s especially proud.

“We were the only team to qualify all five girls from the regional to the state,” he said. “That says something about our program, about the work the girls put into it.”

Other than Jump, Longbottom is the only senior on the team. She finished 29thof the 78 players competing in the championship. Maddock, a junior, finished 22nd. Stewart and McDonnell, also juniors, finished 24th and 30th, respectively.

Despite being such a new school, Oak Grove has enjoyed remarkable success in girls golf. The team won the Central Carolina 2-A Conference’s regular season and tournament titles each of its first two years of existence. A year ago, the Grizzlies finished third in the state tournament.

Jump said that before this season began, Black had all the Grizzlies list five individual goals and five team goals they hoped to accomplish. Winning a state championship was something everyone on the team said they were working for.

“We knew we had a really good shot at winning it,” Jump said.

Black said because the Grizzlies have so many returning players, the belief is they’ll contend for another state title next year.

“We certainly hope so,” he said. “We’ve got a good group coming back.”