Emily Mathews of Eastern Alamance runner-up in 3-A 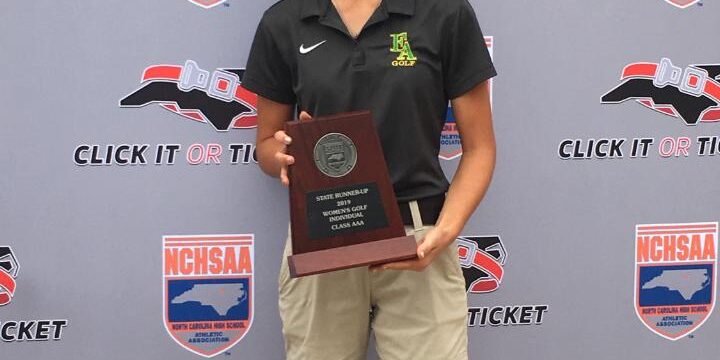 Rockingham County was thwarted in its bid to win a fifth straight state title in the women’s 3-A tournament by a red-hot Cox Mill team from Concord.

The Cougars were consistent shooting 240-241 for a 481 total at Foxfire Resort & Golf Club to finish in second place. Their score was 12 strokes better than in 2018 when they won their fourth title in a row to tie a state record.

“We’ve been real fortunate to win four years in a row,” said Rockingham coach Mike Williams. “But your hat has to go off to Cox Mill. They played a great (final) round. I’m happy for them.

“We didn’t give it away, they took it. My girls played good and we had a good year. We won the conference, the conference tournament and our regional. We just got beat.”

The Cougars trailed Cox Mill by only three shots after the opening round.

“After the first round, I told them they had to play the golf course,” Williams said. “Don’t get into a match play situation (with Cox Mill). Just play to the best of their ability and we’ll see how things come out. I think they did a good job of that. I’m real proud of them. We don’t have anything to be ashamed of.”

The Cougars were led by seniors Riley Hamilton and Victoria Cook. Hamilton shot 79-76 for 155 to tie for fifth place in the individual standings. Cook shot 80-76 for 156 to finish seventh.

“We’re losing two great seniors,” Williams said. “It’s going to be a big loss. I feel bad for them. I know they are disappointed. They always treated golf like a business and it helped our program. I’ll always be grateful for that.”

Both players will play college golf next year – Hamilton at East Carolina and Cook at UNC Greensboro.

“They will be an asset to those programs,” Williams said. “I look forward to seeing what they do in the future. But I will miss Riley and Victoria. Riley transferred in last year and helped us win another title, and she played good this year. Victoria got better every year in the state tournament. I appreciate all their hard work. I couldn’t ask any more out of them.”

“We’ve got those two sophomores coming back and we have a couple of kids coming from the middle school,” Williams said. “We’ll have a very good team next year and, hopefully, make it back to the state tournament again.”

Cox Mill was led by junior Elizabeth Lohbauer who shot 73-70 – 143 to win the individual title.

Bursting onto the scene at the state tournament was freshman Emily Mathews of Eastern Alamance. She shot 77-70 – 147 to finish second in the state.

“I didn’t really have any expectations,” she said. “I just wanted to have fun and whatever happens, happens.”

Her play this year has impressed her coach, Robbie Wood.

“As a freshman, she’s the best I’ve ever seen,” he said. “She’s got the game. You need to keep an eye on her the next three years.”

Mathews shot a 70 in the second round despite making double bogey on the 10th hole when she thinned a tee shot and got into trouble.

“I played really solid,” she said. “I was 2-under on the front. Unfortunately, I made the double on 10 but I got it back to 2-under to finish.”

Mathews made five birdies in the final round. She showed uncommon poise for a 14-year-old playing in the state tournament for the first time.

“I was nervous off the first tee but that’s every tournament,” she said. “I turn the nerves into excitement. Coming down the 18th hole, there was a fairly big crowd so that gave me a little pressure but I liked it.”

Wood is impressed with her distance, especially for someone so young with a slight build. He said Mathews hits it more than 300 yards off the tee and can hit her 4-iron 215 yards.

“I don’t know if I can put into words how good she can strike the ball,” Wood said. “She won a long driving contest recently. Off the tee, she is 50 to 60 yards in front of everybody else. That’s hitting it. She’s amazing.”

Wood said Mathews’ dedication to practice has paid off.

“She works hard by going out every morning to the driving range before she goes to school,” he said. “When she gets home in the afternoon, she is on the range again. When we finish a match, she is on the practice green putting some more. And you couldn’t ask for a better kid. She has a good head on her.”

“He has helped me improve my mental game a lot,” said Mathews, who has been working with Duncan for nearly two years. “My swing has changed a lot with him. It is more consistent. I’m just really excited to keep progressing. I want to come back next year and, hopefully, win.”

Mathews led Eastern Alamance to a sixth-place finish in the state team standings. Her teammates were senior Riley Beck who shot 88-87 – 175 and junior Chandler Bryant who shot 101-95 – 196.

Siana Wong of Northern Guilford competed as an individual and tied for 8th place with rounds of 79-78 for a 157 total.