North Carolina-based firm making a world-wide name for itself 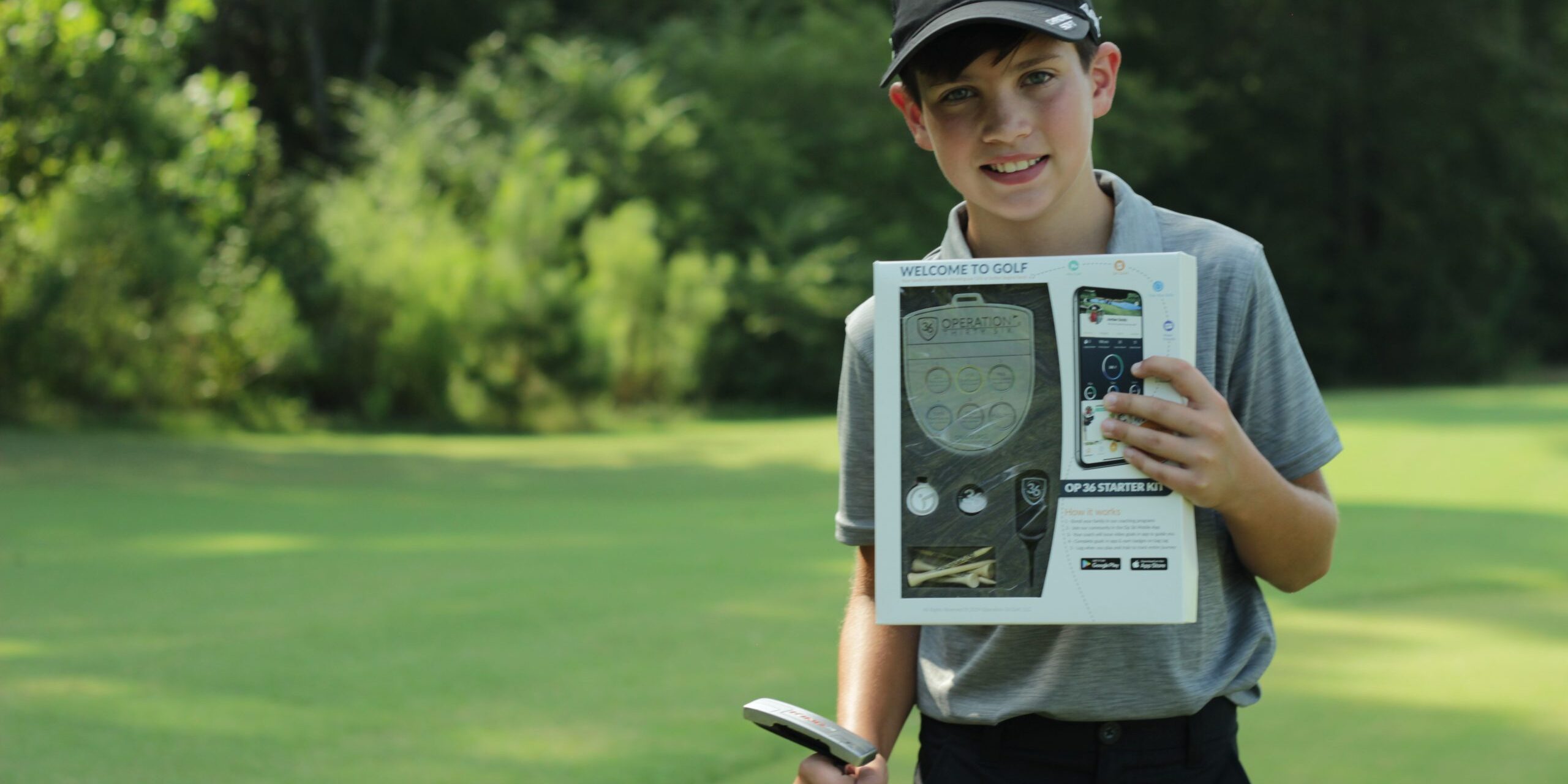 Kernersville’s Peyton Wyatt started playing golf two years ago when he was 7 years old. After he immediately began showing progress, Peyton told his father, “Dad, I want to get into some tournaments.”

With his son playing in his first few competitions, father Alex Wyatt met a few other parents who told him about Operation 36 Golf, a North Carolina-based, on-course development model and coaching program. Operation 36 is designed to take a beginner from their very first round of golf to becoming a lifelong golfer.
Beginners play nine holes starting 25 yards from each green in events run by a facility’s professional staff. The challenge is to shoot par 36 — by taking four strokes or fewer on each hole. Once the golfer shoots 36 or better, they progress to Division 2, and start 50 yards from each green. All progress is tracked in the Operation 36 Mobile App. The challenge continues until the golfer can shoot par 36 from all 10 divisions — with the final division being 3,200+ yards for nine holes.

Peyton and his sister, Emma, who is 8 years old, started participating in Operation 36 at The Cardinal by Pete Dye in Greensboro. Last March, McConnell Golf transitioned The Cardinal from a private club into a semi-private facility, and the club introduced Operation 36 Golf soon thereafter.

The Cardinal professional Logan Peck said he uses much of what Operation 36 provides on its Website, but he also incorporates a lot of his own twists as well, such as getting the golfers on flight scope and getting their yardages. “But it’s doing a lot of games, warm-ups,” Peck said. “I have learned playing is becoming a lot more fun than practice and just hitting range balls. They love breaking 36 and moving to the next level and feeling that level of accomplishment.

“I use the Website and log in their practice sessions and events with me, and they can do their own individual practices and play dates,” Peck said. “Most practices are just getting them to show their grip, posture, etc., and then play games to make it fun, you then check off all the tasks they needed to pass each rank.”

Designed through a decade-plus of study and experimentation, Operation 36 Golf is the brainchild of a pair of PGA professionals, Ryan Dailey and Matt Reagan, who first teamed up to start a long-term junior golf development program at Keith Hills Golf Club in Buies Creek. Their original goal was to increase family participation at the golf course with a focus on developing the juniors as athletes first, as well.

Several incarnations later, they arrived at Operation 36 — an on-course development model with a 6-Rank curriculum program in which students and parents track their progress via an app, while professionals can interact with a student’s progress online and keep them motivated outside of class.

“It sounds a lot easier than it is,” Alex Wyatt said. “It’s a great program that I have recommended to a lot of people. They have a great little group of friends. One girl, who is among the best 12-year olds maybe in the state, has been a tremendous influence on my daughter.”

The program has gained widespread popularity during the past several years, growing to more than 525 facilities in eight countries and approaching 30,000 participants. Thirty-three clubs in North Carolina (46 total in the Carolinas) are currently using Operation 36, including 10 in the Triangle and five in the Triad. Other notable courses in the Carolinas include Colleton River, Pinehurst Resort, Kiawah Island and Greensboro Country Club.

Operation 36 is based on a fun and structured plan to introduce beginning adults and juniors to playing the game on the course, with technology to support the entire experience.

“Operation 36 is just a way better structured program,” said PGA Tour winner and Operation 36 parent William McGirt. “(With) the progression through the yardages and being play-based, everything is focused around playing golf.”

During their odyssey, Dailey and Reagan have been recognized for their efforts by receiving the 2013 and 2014 Carolinas PGA Youth Player Development awards, as well as being voted best teachers in the state of North Carolina by Golf Digest in 2018 and 2019.

Old North State Club, a Tom Fazio-designed private club along a 2 ½-mile peninsula of Badin Lake in New London, didn’t run an Operation 36 junior program, but the club boasted roughly a dozen men and the remainder women among its 40 participants. “The program, I feel, was primarily geared towards engaging youth in golf,” said Old North State golf pro Adam Davey. “At our facility, we don’t have many juniors who live out here full-time so (professional) Danielle (Haislip-Allen) and I kind of took the program and modified it somewhat. It’s a great program in that you can tailor it to your specific needs.”

Old North State engaged in a three-month program, offering each participant a class every week, running three separate time slots to keep a low student-teacher ratio along with several on-course Operation 36 9-hole events that ran concurrently with the classes. There was a final presentation and cocktail event at the end.

The classes would have a specific focus each week that would attempt to allow the students to pass their on-course, nine-hole events; shooting 36 or less gross for nine holes from a designated yardage on each hole.

“Obviously, we don’t expect our golfers to all of a sudden be able to shoot even par on the front side from the red tees, but we saw a huge benefit that students were focusing on their short game and scoring better as a consequence,” Davey said. “We didn’t entirely neglect the longer clubs, but we beat chipping and pitching and putting to a pulp.”

“I rarely missed what turned out to be one-and-a-half long sessions two times a week for, I believe, for eight weeks,” said Old North State member Brenda Niparts. The Niparts moved to Badin Lake about 17 years ago and Brenda joined the Women’s Golf Association, but she says golf was never a chief priority.

Niparts says Operation 36 has jump-started her interest in the game. “We always got help with our individual needs through a variety of techniques and games,” she said. “There was plenty of opportunity for questions. My favorite parts were the days that we started at either 25, 50, 75, or 100 yards on each hole, and hole out from there. We then entered our score into our app on our phone and if we did not meet the expected score, we had to do it again.”

Niparts added that more than once she overheard her husband telling his friends how much time she was devoting to golf.

“Some of our better women golfers remarked to me that they could see much improvement in my game when we played on our regular play days,” Niparts said. Indeed, at the end of the season she was named “Most Improved.”

“I hope to start again this spring and I encourage all the beginners and the experienced golfers to join,” she said. “There really is something for everyone.”

Another Old North State member, Ann Piehl, and her husband, Don, have lived at Uwharrie Point and been members of the Old North State Club for 17 years. She signed up for the full Operation 36 course and attended all but a couple of the sessions.

“I especially liked the swing lessons that moved from putting to irons to fairway woods and drivers,” Piehl said. “I think the biggest attribute to the whole program was that it motivated me to come out to the range and also to play more rounds of golf in order to practice many of the drills we were taught.”