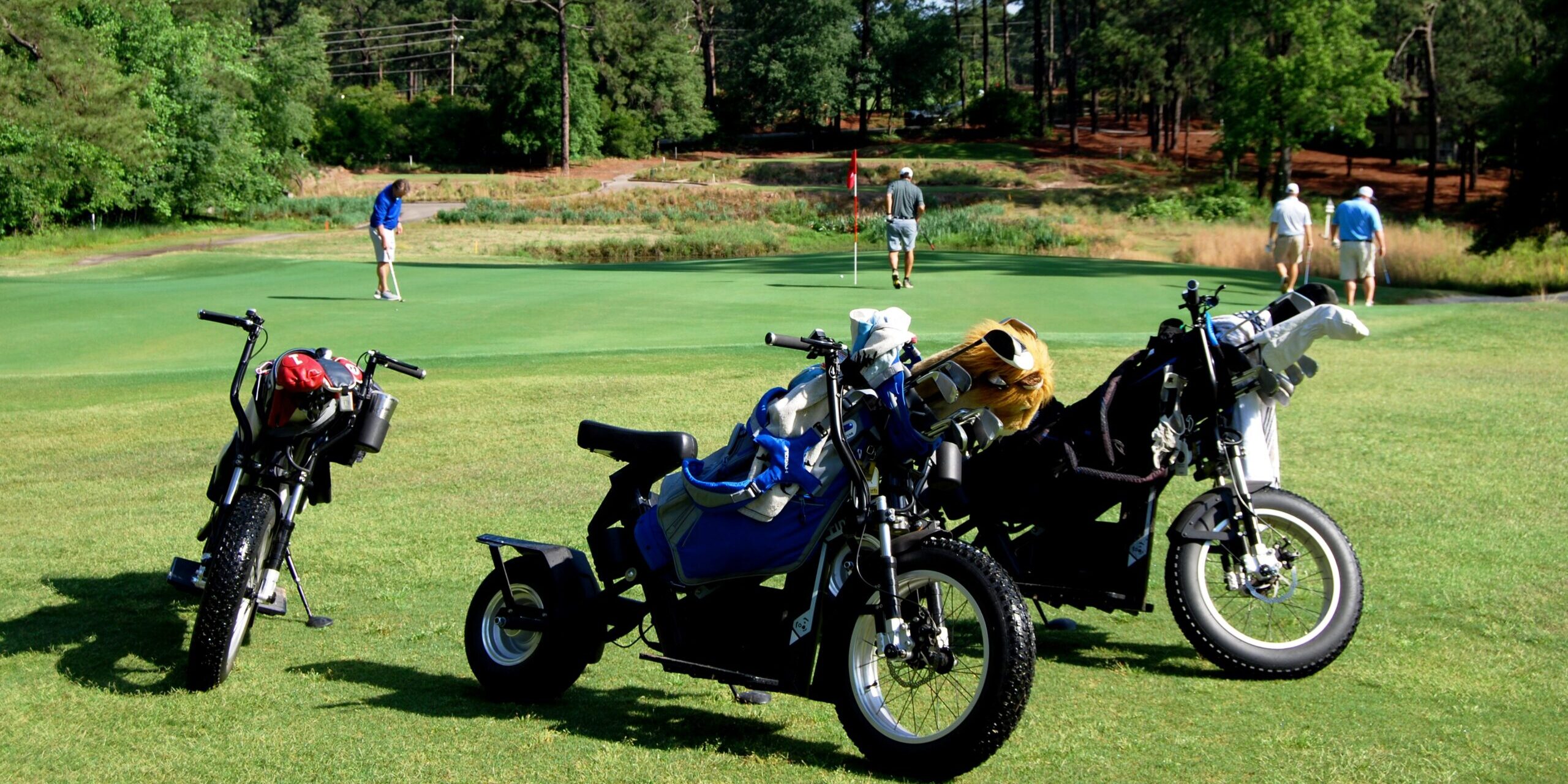 What is one of the major complaints about golf? It takes too long to play, detractors like to say.

Proponents of the game are constantly trying to invent new and different ways to “speed the game up” with golf architects even designing award-winning short courses that are now cropping up all over the country.

Pine Needles Lodge & Golf Club and its sister course, Mid Pines, are featuring a way to “finish up faster.” The Southern Pines resort offers Finn Scooters, which are single rider electric golf carts that look like a mini motorcycle.

Kelly Miller, president and CEO of Pine Needles Lodge & Golf Club, began looking at the alternative mode of golf course transportation two years ago at the PGA Merchandise Show in Orlando, and then agreed to test four this fall. Miller now has 16 of the scooters and is looking to lease more.

Finn Scooters says using one of its vehicles limits each hole to an average of 7.5 minutes.

“It’s a fun way to play golf, and today especially with the social distancing you are on it by yourself, and the pace of play is unbelievable,” Miller said. “I played the other day in a twosome and it was an easy two-hour round. We were a twosome and we were the first ones out on the course but that shows you what you can do. During the evening with foursomes we’ve played in under three hours.”

This isn’t the first time in the last few years that Miller has his resort on the cutting edge.

“We experimented with GolfBoards but those actually require some skill and some training because you are leaning to make turns,” Miller said. “The thing I like about the Finn Scooters is it’s almost like riding a bike and everybody has ridden a bike before, so it’s a pretty safe way of getting around the course. I think they are here to stay.”

There is a separate kiosk in the pro shop where golfers can register to take one of the scooters, which costs just slightly higher than riding a regular golf cart.

The scooters run on batteries and can normally last around 36 holes before needing recharged. The low-center of gravity and lightweight aluminum frame also make the Finn a well-balanced machine, with your golf bag centered in the middle for easy access.

“They are fantastic in my opinion, the only way to play golf,” said Brian Barker of Durham, whose foursome all rented the scooters at Pine Needles on a sunny day in May. “They are very fun to drive; they can almost be more fun to drive than playing golf itself. And without question it speeds up the game.”

Barker said he used to ride motorcycles as a teenager but hasn’t ridden in 30 years.

“I would say they are more like a motorcycle than a bike, just the feel of them and the stability,” Barker said. “It’s amazing how stable they are even in areas where there is pine straw or it’s wet. I feel very safe on them. Anybody can do it.”

Everything is cool about these scooters, even down to the kickstand, which mimics a golf wood. “You can put it down anywhere and it holds,” Barker said of the kickstand.

With two iconic Donald Ross golf layouts as the resort’s home base, Miller is sensitive to each side of the “scooter debate.”

“The younger folks are really fired up about it,” Miller said. “But there have been some people who don’t like it since it’s not a traditional way to play golf and we have two old, historic golf courses here.

“The challenges are making sure you’re not offending your longtime members and guests who love and enjoy the traditions of the game. But a good friend of mine at UNC once said if you are really looking out for the long-term interests of your business you’re probably looking at college graduates. ‘What do they want, because 20 years from now they are your consumers?’ We’re trying to adapt and walk the tightrope between the two.”