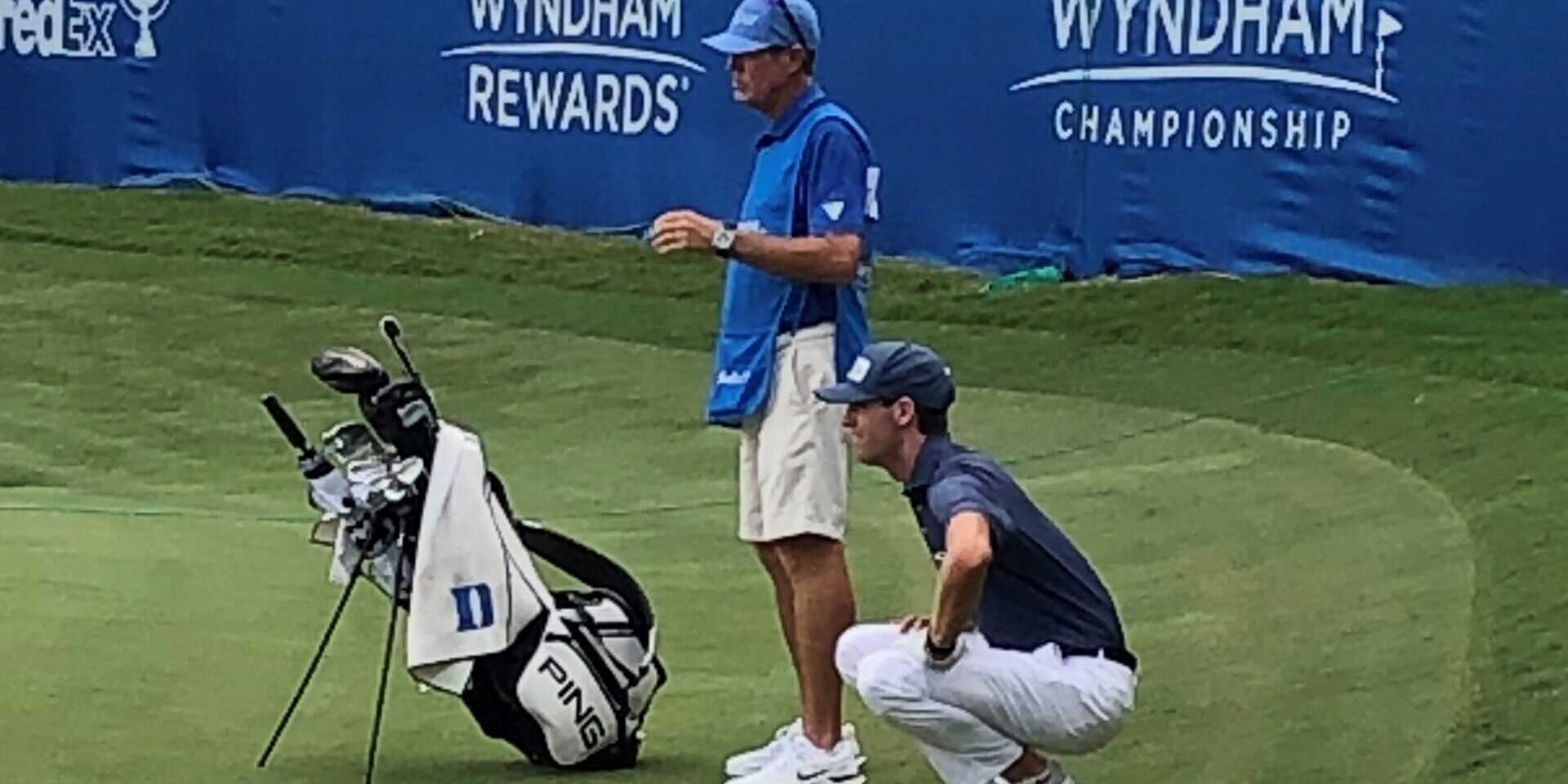 More so than any time in recent memory, there are plenty of local favorites to root for on the PGA Tour.

Add former Duke All-American and Sedgefield Country Club member Alex Smalley to that list after a great showing as a sponsor exemption in the Wyndham Championship in mid August helped propel him to the top of the professional ranks after toiling for a few years on mini tours.

Smalley, who went to Wake Forest High School before moving to Greensboro, missed the cut in California in his first PGA Tour fall event, but that’s understandable considering his hectic six-week golf experience.

“It has been a little wild; a little hard to believe,” Smalley said. “It has just been go, go, go for 6-7 weeks. I don’t know if it has all settled in yet. I was playing Forme Tour events just a few weeks ago and now I have a PGA Tour card. It’s a little tough to wrap my head around and it really hasn’t hit me yet.”

Playing in front of large crowds will take some getting used to, Smalley said.

“There are a lot more things going on on the PGA Tour – more people watching, more grandstands; it’s not like you are just out there playing with some of your buddies in two carts. You have to control your emotions and nerves, but my strategy is to just keep doing what I’m doing,” Smalley said. “In the fall season the fields might not be as strong but out on the PGA Tour it’s not like there are just 10 great players. Everyone out there is really, really good, so it’s just a matter of putting every part of your game together for a week.”

Smalley is looking forward to renewing some old golf friendships, and creating new ones with the North Carolina contingent, which continues to grow with players such as PGA Tour Rookie of the Year Will Zalatoris, Doc Redman, Chesson Hadley, Webb Simpson and Harold Varner.

“I’ve known Doc since we were about 9 or 10 years old,” Smalley said. “We were in the same high school conference so I played high school golf with him and plenty of CGA tournaments. When he won the U.S. Amateur is life changed for the better so I haven’t seen him much.”

“Harold was really nice and he gave me his phone number and said if I need anything to get in touch with him, so hopefully when he’s back out here playing we can touch base.”

Varner appears poised to break through on the PGA Tour after another solid season.

Varner qualified for his sixth consecutive FedEx Cup Playoffs in 2021 and advanced to the BMW Championship (T12) and finished the season No. 44 in the FedEx Cup standings. He collected 10 top 25 finishes, highlighted by a runner-up at the RBC Heritage.

“I always think that I’m ready to win on Tour, I’m a positive guy,” Varner said. “My time is coming. It’s way better to just do it than say ‘I told you so.’ If I came out and was beating my chest then I wouldn’t be a cool guy and I don’t like when people do that.”

Meanwhile, Redman, who will be 24 in December, pocked $1.36 million last season with four top 10 finishes, while Zalatoris, a former Wake Forest University All-American, made $3.48 million with a second place finish at The Masters and a top 10 performance in the PGA Championship.

“I think the reason why I’ve played so well in the majors is it just feels the same as all the other tournaments,” Zalatoris said. “The golf courses are obviously way harder than regular tournaments, and harder golf courses tend to favor me since my ball-striking is the best part of my game.”