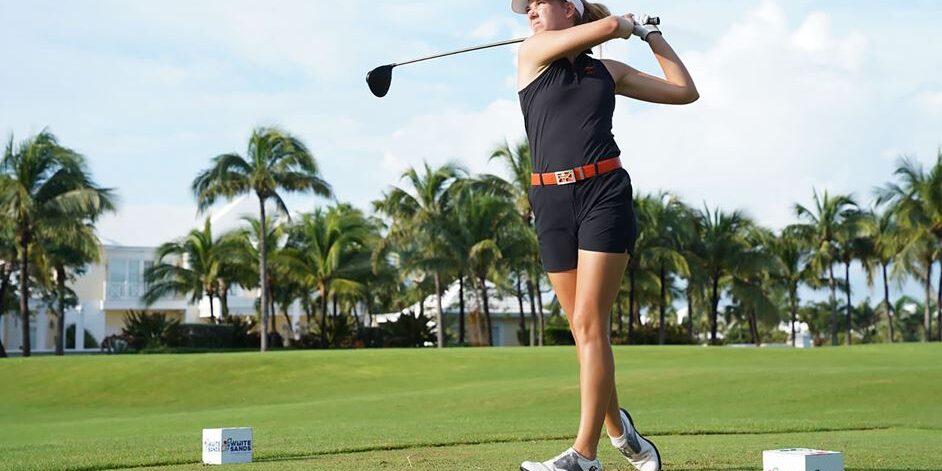 Emily Hawkins’ final season at Campbell has been consistently superb, highlighted – so far – in mid-February with her second career individual title.

The senior from Lexington was the only player among 95 in the Sea Best Intercollegiate field to finish under par over three rounds at San Jose Country Club in Jacksonville, Fla., posting 73-70-72 and winning by a single shot over Minori Nagano of Seminole State. Hawkins was one of five Camels to finish in the top-20 as Campbell dominated the 18-team competition with Coastal Carolina settling for second, 37 shots off the pace.

She entered this season as a two-time Big South All-Conference performer and had nine career top-10 finishes on her resume. She’s picked up the pace as a senior – notching top-10s in all four of Campbell’s fall tournaments. She posted a career low of 65 in the final round of the White Sands Bahamas Invitational last October while surging to a runner-up finish and leading the Camels to the team title. Earlier last fall, the Camels won the 20-team Golfweek Fall Challenge with Hawkins placing seventh.

Wake Forest’s women team also opened the spring portion of the schedule with victory, this one in record-setting fashion.

The Demon Deacons’ 45-under-par score at the UCF Challenge was the second-lowest 54-hole team score in relation to par in NCAA history.

Eagle Creek Golf Course in Orlando, Fla., had no defense against the Wake Forest lineup

It was the Deacs’ spring opener, coming off a fall season where they won both the Bryan National Collegiate and the Tar Heel Invitational. Those three wins have vaulted Wake Forest to No. 5 in Golfstat’s national rankings.

The great scores weren’t exclusive to Wake Forest. The lowest second-round among the 99 players in the field was posted by UNC Wilmington’s Mallory Fobes, a junior from East Bend.

A holed-out eagle from 93 yards on the 10th hole was the highlight of a 6-under-par 66, matching the Seahawks’ record for a single round. It was the third time she posted that score in her UNCW career. Fobes ended 25th on the leaderboard with 75-66-72. 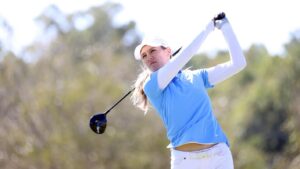 Depth and consistency paid off for UNCG in the spring schedule opener as the Spartans claimed their first title of the season.

After a fall slate that produced one second-place finish, one third and one fourth, the Spartans claimed the 21-team Advance Golf Partners Collegiate at Hammond Creek GC in Palm City, Fla. in mid-February.

Nick Lyerly’s first-round 68 was the Spartans’ only sub-70 score in the 54-hole event but they had nothing higher than 77 throughout the line-up. All five players contributed in the 288-292-290 showing that produced a three-shot win over Creighton.

“It was a complete team win this week,” said UNCG coach Terrance Stewart. “I am very proud of the entire team working so hard to improve. The results will come over time.”

Lyerly, a senior from Salisbury, won two titles in the fall to earn consideration for the 2022 Ben Hogan Award, which annually is awarded to the top player in NCAA golf in all divisions. He is just one of three golfers on the list of 30 from a non-Power 5 school.

Lyerly settled for fourth place in the Advance Collegiate as he followed his opening 68 with 73-72. Junior Symon Balbin tied for 11th, shooting 71-74-72 and sophomore Randall Hudson tied for 14th with 71-74-72.