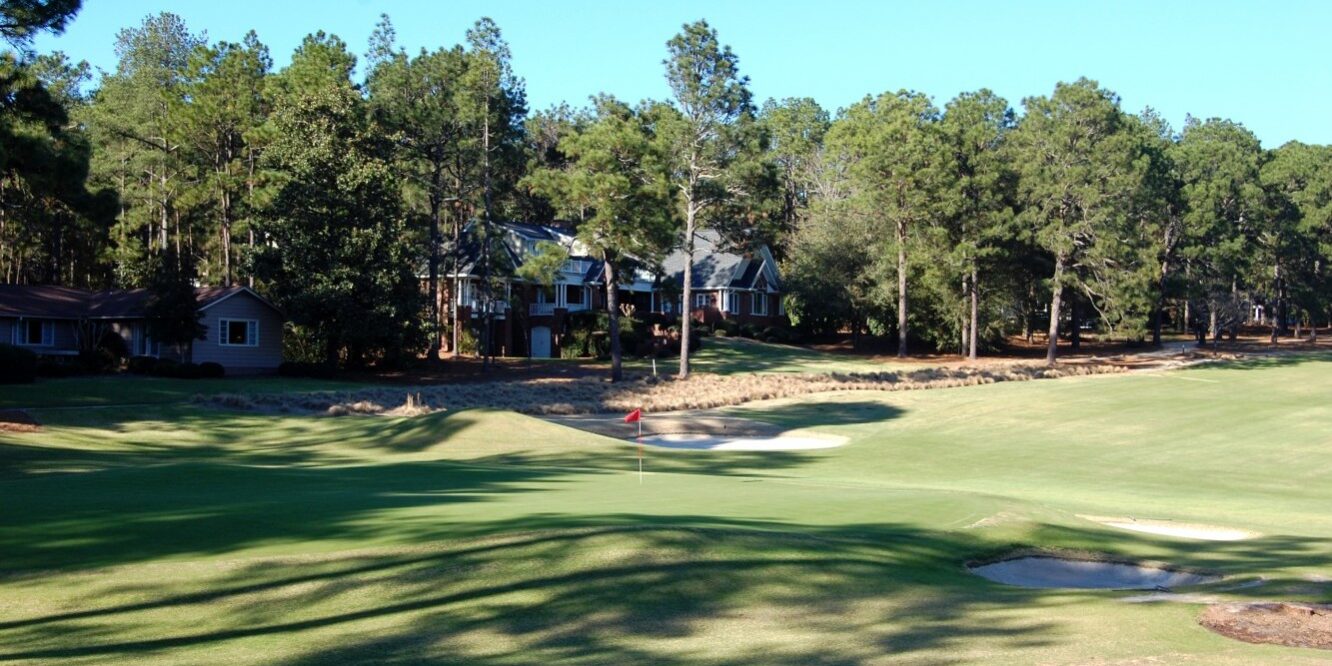 When he was contemplating converting the green complexes at historic Pine Needles resort in Southern Pines from bentgrass to an ultra-dwarf strand of bermudagrass, Kelly Miller didn’t have to look far for a good sampling — just across Midland Road, in fact, to the Mid Pines Inn & Golf Club.

Miller, the longtime president and CEO of the company that owns and operates Pines Needles and Mid Pines — both designed by Donald Ross — was able to witness the advantages of bermudagrass first hand after Mid Pines underwent an extensive 2013 renovation headed by architect Kyle Franz. The greens were resurfaced with a mini-verde grass that has proven not only more manageable, but also capable of being cut to lower and faster levels — and far more heat tolerant during the steamy Sandhiils summers.

By all accounts, the Mid Pines renovation debuted to wide acclaim.

But for Miller, an accomplished competitor and knowledgeable Ross devotee, his wheels began turning long ago while playing two other historic courses further south — Country Club of Charleston in the Lowcountry of South Carolina, where Miller had competed through the years in the prestigious Azalea Invitational, and Seminole Golf Club in Juno Beach, Fla., one of Ross’s most renowned designs, where Miller is a member.

“The greens at Mid Pines have turned out terrific. It has been a big success for us. That’s what we want to bring across the street.”

The Pine Needles greens were originally bermudagrass when the golf course opened in 1928, but like many golf clubs across the Southeast, the resort transitioned to the superior bent grass in the 1960s, when that strain became the industry rage. Miller said Pine Needles has been testing bermudagrass strains on their practice greens for several years.

Miller said the Pine Needles staff, headed by golf course superintendent Dave Fruchte, who has been at the resort since 1990, will begin work in late June and expect to have the new greens ready for play by the beginning of September. Miller and Fruchte have not decided yet which of the new ultra-dwarfs to use — Champion, MiniVerdi or Tifdwarf — but will make that decision soon.

“We haven’t made any official decisions, but I would say if we are leaning one way it’s probably toward Champion,” Miller said. “The bermudagrass (greens) are so much better now. You can get faster greens than the bentgrass; you get the firmness so you don’t get ball marks. And obviously you don’t worry about the things you have to worry about in the summertime, when it is 100 degrees and you’re worried about losing your greens. So you either cover them when it’s really cold in the wintertime or you’d work like crazy during the summer trying to keep them alive. They’ve made bermudagrass heartier during the years. When you do the conversion, you just don’t have to worry about anything.”

Pine Needles isn’t the only big-name golf course in Southern Pines that will be converting its greens to bermudagrass in 2016. Just two miles up Midland Road, Talamore Golf Resort is also making the transition. The Talamore project will commence in early May and is expected to be complete by mid July — in time for the annual U.S. Kids World Golf Championship held throughout the Sandhills, and for which Talamore is a host golf and lodging facility.

Designed by architect Rees Jones, who helped fine-tune Pinehurst No. 2 for the 1999 and 2005 U.S. Opens, Talamore opened in 1991. A course renowned for being both visually striking and enjoyably playable, the 7,020-yard layout was also made famous by instituting the first llama caddie program. Like Pine Needles, the Talamore Resort includes a sister course, Mid South Club, located across Midland Road.

Talamore debuted with the Penncross strain of bentgrass on its greens. After a quarter-century, the club began reviewing different renewal concepts. Talamore’s owner, Bob Levy, made the decision to convert to bermudagrass in large part based on the overwhelming success enjoyed by Mid Pines and some of the other local courses that have already made the transition.

Matt Hausser, Talamore’s director of golf operations, said that following a thorough review of the different strains, Talamore elected Champion bermudagrass. “Along with the smooth consistency, bermudagrass greens fare far better than bentgrass during the hot summer months around the Sandhills,” Hausser said.

Both Talamore and Pine Needles — which has been the site of numerous USGA and regional competitions, most notably the U.S. Women’s Opens in 1996, 2001 and 2007 — are expected to receive a boost from the new greens at the cash register, as well. Having greens that are at their best during the summer months and healthy year round allows an increase in the seasonality of the two resorts.

“During the summer when the greens were bentgrass we really had to manage our rounds,” Miller said. “In other words, in August, when it was really hot, we wouldn’t take a big event that would bring lots of players because your staff couldn’t get out there to properly water. Now, at Mid Pines we are looking at an August 2017 event that I would never have looked at before. Now we are actively searching out business during that time of the year. With bermudagrass, July and August are when the greens are in their best shape.

“The winters can be a bit more challenging with bermudagrass greens when extended low temperatures require us to cover the greens at night,” Miller said. “But the benefits of having outstanding bermudagrass greens in the summer far outweigh this winter inconvenience.”

It looks like the investment is already paying off as in February of this year, the USGA announced Pine Needles will host the 2019 U.S. Senior Women’s Open.