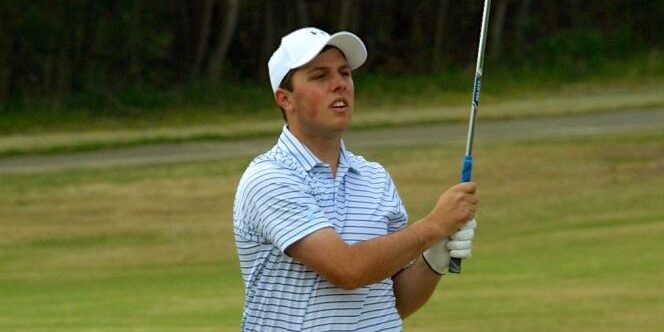 Grant Powell got an early introduction to the game of golf. He was 1 when he started picking up clubs and swinging them as he toddled along.

When Powell was just 7, he won the first-ever tournament he entered, shooting a 41 on nine holes of the Champions Course at Bryan Park in an event that was a part of the Precision Golf Tour. Powell’s father Anthony and mother Deborah accompanied him that day.

Powell said he remembers turning to his dad and saying, “Let’s have a good day,” with all the enthusiasm a 7-year-old might muster.

He did, his 41 securing a three-shot victory for him.

Now 18 and headed to Greensboro College to continue his golfing career, Powell said the biggest improvement in his game in recent years came when he converted to a claw putting grip.

“I went from being a good putter to probably the best in the world,” Powell said, only half-kidding in his assessment of his skills.

Powell said he’s deeply appreciative of a host of people who have helped him become the golfer he is, and who help him as he works to improve. When recalling his North Carolina Junior Championship victory in June, he asked that all three of his caddies be mentioned.

In addition to Jake Taylor who caddied for Powell in his final round, Jake Herring and Tripp Summerlin caddied for him earlier in the week. Herring is only 12 and the youngest golfer to compete at the Junior Championship. He shot a 75 on one day of the tournament.

Summerlin is a resident of Summerfield and one of Powell’s longtime friends. Summerlin attended Rockingham County High School.

Powell said he’s also appreciative of the Tarheel Junior Golf Tour, a non-profit endeavor intended to promote junior golf in North Carolina. Powell has been a winner on the tour seven times in the past year.

“I hope they’re aware of how much they’ve meant to me,” he said of organizers of the Tarheel Tour.

Powell said despite having taken up golf at such a young age, he never tires of the sport.

“I want to play every day I can to the best of my ability,” he said.

Powell won the North Carolina Junior Championship at Wilson Country Club in June, the recent Northwest Guilford graduate closing out with a 3-and-2 triumph over Ben Woodruff in the final round.

“It was four days of golf and a lot of fun,” Powell said. “It’s a moment I’ll never forget, that’s for sure.”

The shot that all but sealed the win for Powell came during the final round, on the par 4, 15th hole when he stuffed a 9-iron approach shot to within 2 feet of the pin.

Powell calmly tapped in the birdie putt, giving him a three-stroke lead with three holes to play.

“Now, we’ve just got to hit fairways and greens,” Powell recalled saying to his caddie. “The best (Woodruff) can do is tie us and force a playoff.”

Instead, Powell settled the matter on the 16th hole. Woodruff, a rising junior at Huntersville Hough, hit a 5-foot putt for par, but Powell did likewise on his 4-foot par attempt, securing the victory.

Powell entered the Carolinas Golf Association tournament as the No. 10 seed.

He said he knows it’s a long shot, but said his ultimate goal is to earn a berth on the PGA Tour.

“He’s very dedicated,” Bare said. “He’s a year-round kind of guy who travels all over the state and even Southeast to play. He’s a good student-athlete, the kind of kid who makes my job easy.”

Northwest won the Piedmont Triad 4-A Conference golf championship all four years Powell was on the team. His senior year, Powell was named the conference’s player of the year.

“He’s definitely ready for the next step,” Bare said. “He’s still got some improvements to do to his game, but he’s aware of what he needs to work on. I think he’ll do well in college golf.”

For a good while at the N.C. Junior Championship at Wilson, it appeared Powell was going to wrap up the tournament even earlier than he did. He was 4-up after 12 holes, but Woodruff got back into contention with birdies at No. 13 and No. 14 to pull back to within 2-down.

That’s when Powell hit his jewel of an approach at No. 15. He said he knew as soon as he hit it the shot was a good one.

“I thought it was going in there for a minute,” Powell said.

Instead, backspin eased it to within tap-in distance.

Powell opened the N.C. Junior Championship with a 1-under 71 during Tuesday’s first round. He claimed six match-play victories and played 115 holes at 12-under par during the four days of the tournament.

Powell tied for fifth in the tournament a year ago and said his spirits were bolstered at this year’s event by encouragement from a variety of CGA volunteers.

“They kept telling me, ‘You can do better than you did last year. Come on, man, you can win this,’” Powell said.