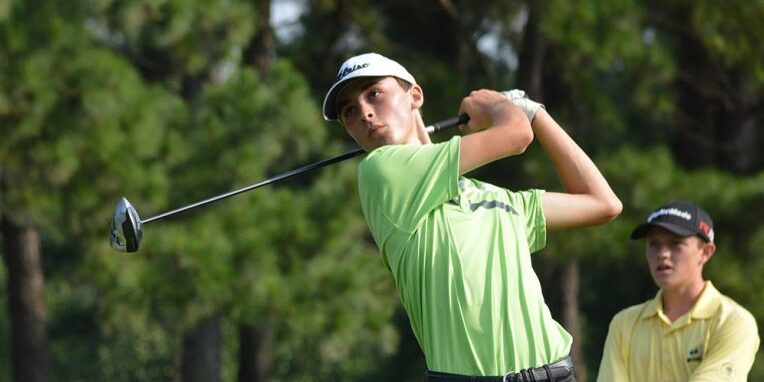 Rowan County’s Nick Lyerly has won his share of tournaments, but his biggest victory to date came in mid-June when he captured the North Carolina Amateur.

“My main goal was to put together four solid rounds of golf,” Lyerly said. “I just wanted to go out and play the best I was capable of playing.”

The end result was a bit of a surprise, he admitted. Lyerly is just 17 and a rising senior at East Rowan High School. The North Carolina Amateur isn’t a junior tournament, but includes the best of the state’s golfers, age be darned.

Lyerly shot 70-71-68-71 at Governors Club in Chapel Hill. His 280 total was 8-under-par and earned him a one-shot victory over Jamestown’s Justin Tereshko.

Lyerly plays a lot of golf with his father, Roger, who is probably his biggest fan. But the younger Lyerly said even his dad couldn’t have envisioned his son winning the North Carolina Amateur so soon.

“My dad never imagined I’d win,” Lyerly said. “Frankly, I didn’t think I would, either.”

While the elder Lyerly had work commitments and wasn’t able to make it to Chapel Hill the day of the final round he followed his son’s achievements hole-by-hole online.

Lyerly’s win didn’t come easy. He was four shots back after two rounds, but kept plugging. His third-round 68 put Lyerly into contention and a pair of birdies early in Sunday’s final round gave him a lead he held, though it was a struggle.

Tereshko finished at 7-under and was playing two groups ahead of Lyerly, who knew the score he needed to win. He bogeyed holes 15 and 16, but birdied 17 to drop to 9-under, a two-shot cushion.

Disaster almost befell Lyerly on the 18th. His drive was true, but his approach shot on the par 4, 456-yard hole wasn’t good. Lyerly hit a 6-iron fat and worried he’d dunked the ball into a pond that protects the green.

“I had plenty of club to get over, but I didn’t hit it solid,” Lyerly said. “When I saw the ball land on the other side, I breathed a big sigh of relief.”

He made a safe chip, then two-putted for a bogey. That was all Lyerly needed for victory.

Brian Lee is head professional at The Warrior Golf Club in China Grove and has given Lyerly instructions for years.

“He has a passion, a desire to improve,” Lee said. “I see greater things for him.”

Lee said it’s hard to overstate the magnitude of Lyerly winning the North Carolina Amateur at the tender age of 17.

“This wasn’t a junior event,” Lee said. “This is the best in the state, regardless of age.”

Lee said that while there’s no weak point in Lyerly’s game, the part he’s working to help him improve is his mid-to-long iron shots.

Getting the ball just a few feet closer to the pin, Lee often reminds his young pupil, dramatically improves a golfer’s odds of making a birdie putt. Knock the ball in tight consistently and you’ll knock at least a couple of strokes off each round.

“He’s the kind of kid, I give him a swing thought and he’ll run with it,” Lee said.

Lyerly’s win makes him the youngest golfer ever to take the North Carolina Amateur championship. He turned 17 five months before the tournament, making him two months younger than Joshua Martin was when he won the event in 2014.

With the win, Lyerly earned an exemption into the 102nd Carolinas Amateur Championship hosted by the Country Club of Charleston.

Lyerly has committed to play college golf for UNC Greensboro. He logs most of his rounds at Corbin Hills Golf Club in Salisbury where he’s a member. The home course for the East Rowan golf team is nearby McCandless Golf Club.

Lyerly said he’s looking forward to playing golf for UNCG, though he quickly noted, “I’ve got one more year of high school, first.”

He said the strongest part of his game is his tee shots.

“I’m good at keeping the ball in play,” Lyerly said.

He said a good drive for him might cover 280 yards, a fairly major accomplishment for Lyerly, who stands 6-feet tall but doesn’t have an overpowering look. “I’m basically a twig,” he admitted.

Lyerly said he isn’t trying to look too far into the future, but admitted he’d love to play on the PGA Tour.

The qualifier was held at Pinewood Country Club in Asheboro. Lyerly tied with Michael Childress, another Rowan County teen, for top honors. They both shot two-day totals of 142.

Lyerly and Childress advanced to the national USGA event at The Honors Course in Ooltewah, Tenn., where a new U.S. Junior Amateur champion will be crowned. The top five finishers from the Asheboro qualifier advance to the national tournament.

Childress is 16 and a rising junior at Concord’s Cannon School. He had a first-round score of 75 in Asheboro, but followed that with a 67 on the last day of the qualifier.

Lyerly’s scores were almost the opposite. He opened with a 68 and followed that with a 74.