Desire, heart, intangibles and that “it factor” have Lexington junior golfer on the rise 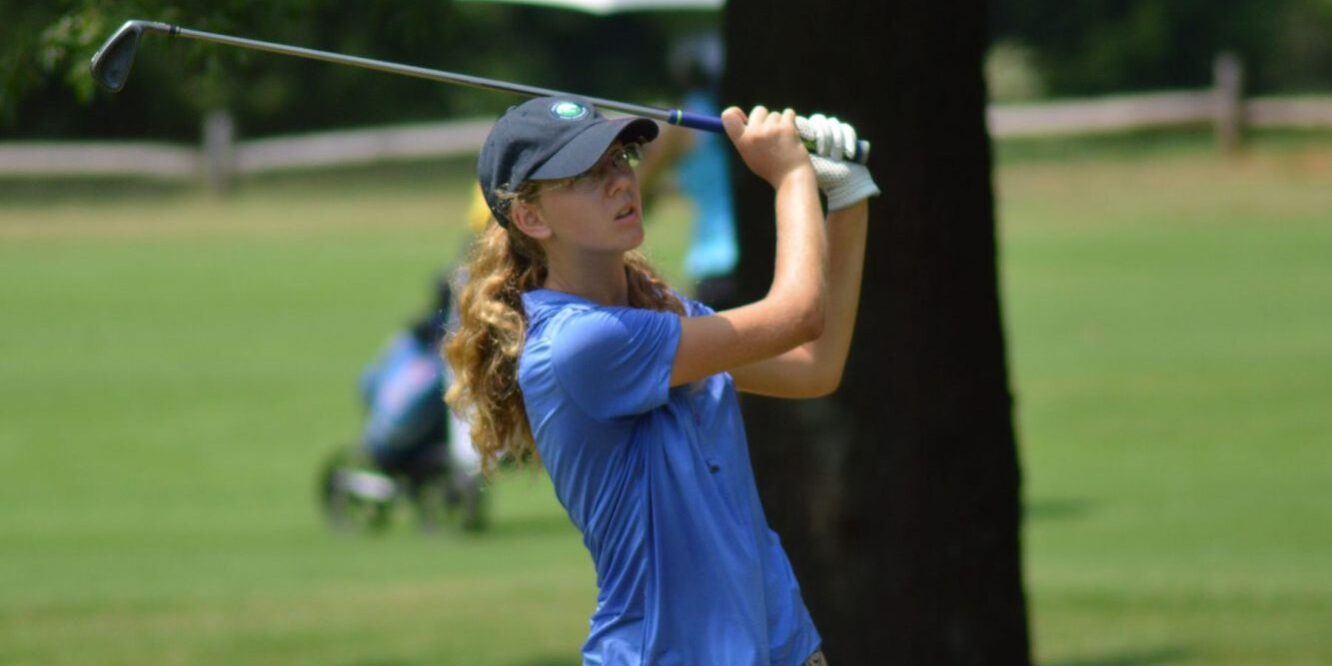 After winning the biggest prize of her junior career, Emily Hawkins celebrated the only way she knows how — competing in the next tournament, just a few days later.

“It has just been a ton of fun, really. I’ve put in a ton of work, and to see that start to pay off, it’s really cool and very exciting,” Hawkins said. “Obviously I’m playing a lot of golf, and I think that’s helped as well, getting more comfortable in tournament situations.”

Hawkins is no stranger to tournament play, but has taken it to another level this summer. The rising junior ranked ninth in the Tarheel Youth Golf Association in early July after competing in five tournaments in June. She won the 20th NC Junior Girls’ match play event, took first place in the Peggy Kirk Bell Tour’s Wolfpack Classic four days later, tied for 11th in a US Junior Girls qualifier three days after that, tied for third in the PKB Precision Junior Girls’ Championship two days later, then tied for second in the 50th Twin States Girls’ Championship a week after that.

July didn’t get off to such a bad start, either: Hawkins won the Big I Junior Classic state tournament at Longleaf to qualify for the national Big I in Sacramento, Calif., the first week of August.

“She’ has really had a superb summer, come into her own understanding her game,” said Chris Haarlow of Precision Golf School, who has coached the Lexington resident for three years. “I think one of the biggest things she does – that a lot of the juniors and the girls aren’t willing to do – is she’s willing to put in whatever time it takes to get as good as she can. I knew she was getting close. She works hard on improving some of the areas of weakness in her game. As she’s done that, her scores have fallen.”

Hawkins won’t turn 16 until September, and she picked up her first career win before her 15th birthday, shooting even-par for three rounds to win last summer’s PKB Tour Championship at Pine Needles. Over the following nine months, Hawkins endured four second-place finishes before coming out on top at a PKB event at Forest Oaks, setting the stage for her remarkable run at the NC Junior.

At the Country Club of Salisbury, Hawkins shot rounds of 78 and 73 on the par-72 course to tie for ninth in stroke-play qualifying. The adventure then began for match play.
“That was my first time doing it,” Hawkins said. “It was kind of a different pressure, having a putt to win a hole; if you miss it you might lose a hole. I really enjoyed it. It was a lot of fun.”

Hawkins prevailed 4 and 2 over Sophie Holland in the round of 32, then survived a 1 up battle with Samantha Vodry. The quarterfinals saw Hawkins cruise 4 and 3 over Madison Isaacson before the final showdowns. In the semifinals, Hawkins prevailed 2 and 1 over Riley Smyth, then cruised 4 and 3 over Grace Massengill for the title. Smyth had earned medalist honors in qualifying, while Massengill was the defending champion. Hawkins never trailed in the finale on the way to her first CGA championship thanks to four birdies and steady pars.

“I’ve been close on some other tournaments,” Hawkins said. “I’d gotten some seconds and thirds, so I was ready to try to win one. This time it all came together for me.”

Golf has been a family affair for Emily. Her dad, Tom, and brother kept bugging her to start playing with them when she was 9 or 10. She finally started hitting some balls on the range with her dad’s clubs, and then got a set of her own. It didn’t take long before she was hooked. Then came the tournaments – and the struggles of not playing as well as hoped.

“I started playing a lot more tournaments in 7th and 8th grade,” Hawkins said. “Obviously I wanted to shoot a lot better than I was, but it was a good learning experience. It pushed me to play in these tournaments and really see what I needed to work on to get better.”

Hawkins’ willingness to work is what sets her apart from others, Haarlow said.

“From a student standpoint, I’m not sure you could want anything more. She works hard, she works on the right things, she plays a lot of golf,” her coach explained. “The best players Robert (Linville) and I have taught at Precision — there’s one common denominator — and that is they play a lot. Emily is right in that mold. She takes a really good golf lesson and does a nice job applying what she learns with me and also focuses on what she needs to do to simply improve her overall game.”

Hawkins still plays a lot of golf with her family. Nathan is 17 and younger brother Calvin is 12. Along with their dad, the quartet will play various informal twosome games at Sapona Ridge Country Club.

While Emily admitted that she and Nathan tend to come out on top, they play enough different formats that “it’s never one team that always wins.” Hawkins said she spends the most time practicing her “scrambling” and putting. She counts her ball-striking and being long and straight off the tee as strong points.

With tons of newfound confidence, Hawkins hopes this summer surge continues for the long term. She is especially looking forward to the longest golfing trip of her young career for the Big I in California. “That’ll be really cool because I’ll be playing against girls from all over the place,” Hawkins said.

She competed in a U.S. Women’s Amateur qualifier on July 18 and finished fifth beating a field of mostly college golfers. It will advance her to the national championship at Rolling Green Golf Club in Springfield, Pennsylvania in August.

Regardless of what happens the rest of the summer, Hawkins will be spending part of her fall opening a lot of letters from college coaches, who can make official contacts with her Sept. 1. Hawkins knows she wants to play Division I golf, but isn’t sure where just yet.

Thanks to her sizzling summer, she’ll no doubt be on a lot of mailing lists. And Hawkins still has two more years of homeschooling and junior golf to go.

“We’ve got a really good plan that we’ve put together. It’s been great watching her results,” Haarlow said. “She’s gifted with a desire, a heart, and some intangibles that make her really good. She’s got that special ‘it’ factor. From an instructor’s standpoint, I’m so proud. When you put a plan together and watch your student execute what you talked about, it’s great.”