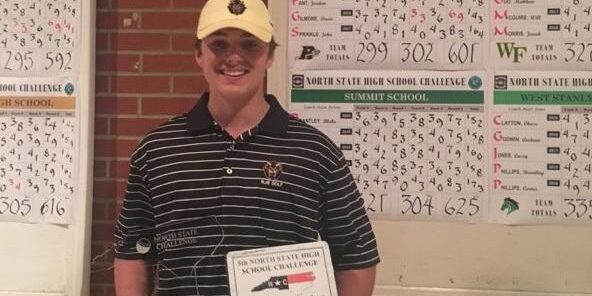 The sudden death playoff at the North State High School Challenge in Kannapolis was a look into what may be future Southeastern Conference showdowns.

Zach Brown of R.J. Reynolds, a sophomore who has committed to Georgia, defeated Michael Sanders of the Cannon School, a junior headed to LSU, on the first playoff hole with a 10-foot birdie putt.

Each player proved why they are top collegiate recruits with Brown, who plays out of Bermuda Run, carding eight birdies in a first-round 65, while Sanders closed on the second day with a 66 at the Club at Irish Creek.

“This win really helps my confidence for the rest of the year,” Brown said. “Going into a playoff and getting into this kind of situation tested my nerves. This was good for me.”

Brown virtually grew up with a golf club in his hand. His grandfather owns two golf courses and his father, Mike Brown, played golf in the mid 1980s at Wake Forest. Zach grew up just off the 10th tee at Bermuda Run.

“Golf has been in our blood forever,” Mike Brown said. “Zach is just like you hear about; kids having a sawed off club in their hands at 2 years old banging around in the yard. He would see the kids going by out here playing in tournaments and by 4 years old he was begging me to take lessons. He won his first tournament at 6 years old at Duke and it has just been a tremendous ride ever since.”

Zach went through a growth spurt in 2016 that produced some inconsistent results, but has now filled out to a frame that measures 6-feet, 190 pounds. He is arguably the longest driver on the junior circuit in North Carolina, averaging 315 yards off the tee.

“But unlike most guys like that he’s very accurate,” Mike Brown said. “And he is a tremendous putter. Ever since he was a little boy he has had a great knack for going low and making lots of birdies. That is what impressed the Georgia coaches; that he’s not afraid to go low once he gets into the zone.”

Zach cut his teeth in U.S. Kids Golf events in Pinehurst for five years until age 12.

“Just being in the sport so long and being in situations to win and coming back from behind and making a move; just those experiences I’ve been in through in all the years has helped me tremendously now.”