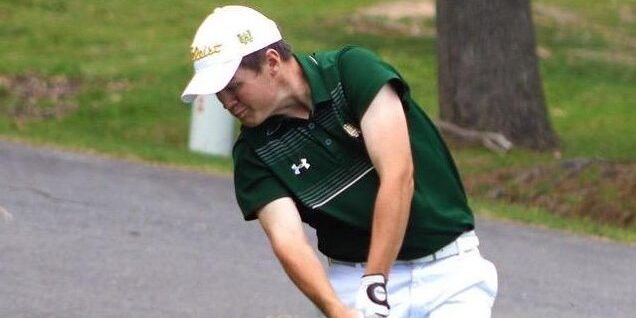 The Wilkes Central High School graduate has never hoisted an individual tournament trophy.  His name isn’t connected with a prominent golf instructor and you probably won’t find him honing his skills on the driving range.

But he has a game that will take him to college in the fall. He just chose a path of his own making.

“I don’t really have a golf coach,” Metz explains. “I’ve been self-taught. I feel like the tournaments help me improve more than anything, more than any advice anybody gave me. You see what parts of the game you need to improve on.”

Metz earned a scholarship to Western Carolina University on the strength of a golf game he has cultivated since shortly before high school.

“My eighth-grade summer I got pretty serious about it,” he says. “I didn’t really start playing tournaments seriously until my sophomore year. I wish I would have started a little earlier, but better late than never, I guess.”

His best finishes have come in recent high school tournaments. He shot 77-73 to lead Wilkes Central to second place in the 2-A state championship in May. He is consistently in the 70s wherever he plays, so he makes a good case for learning the game solo.

“I just feel like golf is more of a mental game,” Metz says. “From my perspective, having a bunch of swing thoughts in my head is going to do more harm than good for me. I’m sure there are some positives, and if I got a golf coach I could probably improve, but I’ve made it this far without one, and I enjoy doing it on my own.”

That’s not to say no one has ever weighed in on his swing. The pro at Oakwoods Country Club in Wilkesboro has taken a look at his posture and alignment a couple times, “but I’ve never had a real lesson,” Metz says.

He goes against the grain when it comes to practicing too. Rather than spend hours on the driving range, he tries to play 18 holes most days.

“I don’t enjoy beating balls on the range hours on end,” he says. “I prefer going out and playing. That’s the best practice for me.”

And when he’s out on the course, he keeps the ball in play.

“I’m a pretty straight hitter,” he says. “I keep it out of trouble for the most part. I’m not the longest hitter, but I’m always right there in the fairway.”

Metz doesn’t second-guess his methods. He has mastered the game on intuition and adjustments, and he has a Division I scholarship to show for his efforts – regardless of other accolades.

“I’ve never really won a big tournament, but I always go out and try to compete with the best,” he says. “I’m not the greatest golfer out there, but I’m not far off. So I do the best I can and see how I stack up against everybody.”

Best Round: A 65 at Oakwoods Country Club. “It’s not too difficult of a course. I hit a lot of wedges into the holes. If you just hit some fairway and greens and make a few putts, you can go pretty low.”

Magic Moment: “This year at our state tournament. Finishing up on 18, I was in the last group. Tapping in my last putt to seal the deal and go back-to-back (state titles). That was pretty amazing. Everybody was out there on the green.”

Goals: “On the short term, I’d like to play pretty solid over the summer in tournaments to get prepared to go to Western Carolina. Once I get there, I want to get in the top five and make the traveling lineup. On the long term, it’s always been a goal to play professional golf. It’s pretty tough to do, but you never know.”