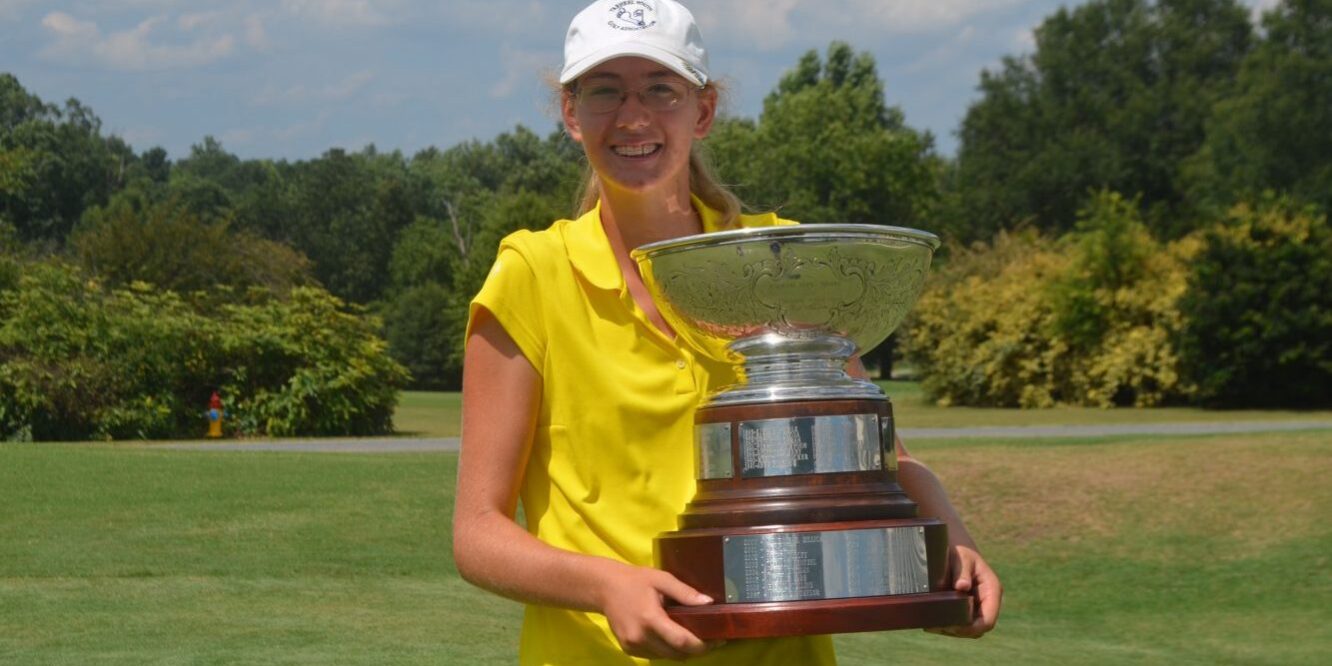 Emily Hawkins seemed destined to play golf, if only because she could see the course from her backyard.

Her parents, Tom and Cathy, live near the 16th hole at Sapona Ridge Country Club in Lexington, where they are members.

“I started playing when I was 9 or 10,” Hawkins says. “My dad and my older brother got me into it. They kind of convinced me to try. So when I went out there and hit some balls, I really liked it.”

Before long, it was clear she had a knack for the game.

“I don’t remember if I was that good at first,” she said. “But I kept at it and it came naturally, as far as the progress of getting better and better.”

Over the past 12 months, the Triad’s No. 1 ranked junior girl has won three tournaments, including the Big “I” National Championship in Madison, Miss., in early August. She shot 3-under 141 (70-71) for a five-stroke margin of victory in the rain-shortened event.

“It’s definitely one of the bigger wins of my career,” Hawkins said. “I knew if I played how I wanted I would have a chance to win it. I hit my irons well and putted well. That’s always the thing for me – if I can putt well. I hit some irons close and gave myself some closer looks than I had in some other tournaments.”

For most junior golfers, wins translate to trophies. But Emily has found a way to cash in for cats. When she was 14, her parents promised her a kitten if she won a tournament, so she quickly found her way to the top of the leaderboard.

“I won a Peggy Kirk Bell event, and I got a cat for that,” Hawkins said.

Then last summer, she won the PKB Order of Merit championship, based on points standings. That accomplishment secured another cat.

“Thor and Bella,” she said.

“We thought about it, but decided not to,” Hawkins said with a laugh.

The Hawkins cats are capped at two for now, leaving Emily to focus on the golf hardware. Playing a heavy tournament schedule, she has finished in the top three in nine events since August 2016. Her run of success includes winning the AJGA Girls’ Championship last September with three straight rounds of 2-under 70.

“That was one of my first bigger ones and it really boosted my confidence,” she said. “It set the stage to win some other ones.”

Her tournament scores are remarkably consistent, in the low-to-mid 70’s, suggesting she has found a knack for competition golf.

“I think I’ve just gotten a little more experience,” she said. “I didn’t start playing tournaments seriously until I was 12. (Playing a lot) has really helped. That’s a big part of seeing the scores go down.”

The third oldest among eight children, Hawkins is home schooled and beginning her senior year. She plays for the Forsyth Home Educators high school team, but it is her tournament play that attracted the attention of Campbell University.  She has earned a scholarship to play on the women’s golf team next fall in Buies Creek.

“It is exciting,” she said. “Obviously it will be a little different because you have the whole team aspect, which you don’t have in junior golf, where you just go off and play for yourself. I think that will be cool. I’m looking forward to it.”

In the meantime, Hawkins will finish out her junior career and her senior year. Despite her busy tournament schedule, she doesn’t spend all her free time on the course. Golf has its place, along side of reading and just “hanging out.”

“I play a lot of nine-hole when I’m not playing a tournaments, just because it’s a little shorter and I can hit balls and putt like I want to,” she said. “I like to go to the range and work on my short game.”

It’s all great preparation to win herself some more kittens.