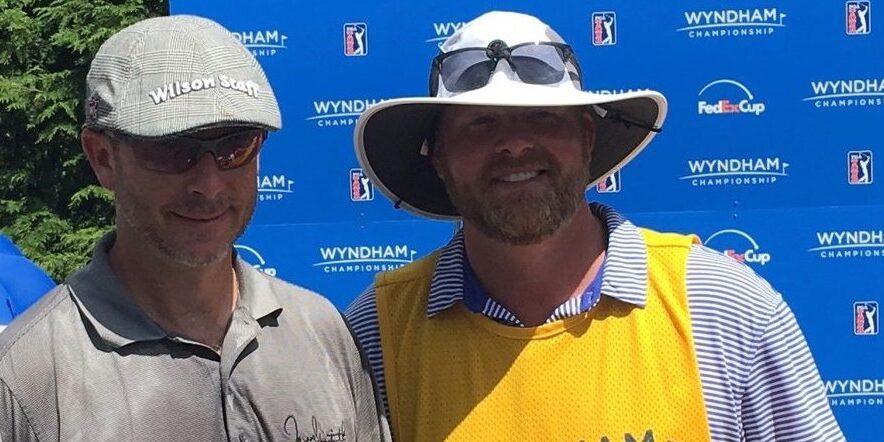 Growing up in Greensboro as golf’s can’t-miss kid, Jason Widener always assumed the PGA Tour would be a big part of his future.

Little did he know it would take nearly three decades to turn his dream into reality.
When he signed to play golf at Duke University, Widener was the No. 1-ranked junior in the country, having won nearly every title imaginable, including the USGA’s Junior Amateur national championship in 1988.

As a freshman with the Blue Devils he won medalist honors at the ACC Championship and was selected All-ACC three times during his college career. He later competed on the Nike Tour and the PGA European Tour, but Widener never reached the heights he and many others assumed he would.

“I took some technical advice partway through my freshman year in college that didn’t work out for me,” Widener said. “I had been a very natural player — a ‘feel’ player you might say — never really had much instruction. When I took the advice, I lost my way. I lost my feel. And I never really got back to the level where I had played until I was 19.”

Instead of competing, Widener began teaching the game. He served as the men’s golf coach at UNC-Wilmington for five years following three seasons as a men’s and women’s assistant coach at his alma mater. As a teacher, Widener’s clientele is located around the state and runs the gamut from good amateur golfers; up-and-coming junior golfers who want to play in college, college golfers and young professionals.

About a year ago, the 46-year-old Widener decided to start focusing on his own game.

“I had figured some things out a while ago, but I hadn’t had any desire to play,” he said. “The main reason I started practicing again was really to be a better coach. I realized with some of my junior golfers and college players that the range work was important, but I really needed to get out on the golf course with them. I felt inspired to work on my own game so that I could do a good job for them.”

Slowly wading back into competition, Widener experienced mixed results. He missed making it to the Greenbrier qualifier and narrowly missed in a U.S. Open qualifier at Pinewild Country Club, finishing as first alternate. Then Widener headed north, and after missing the cut at the New Hampshire Open by a single shot, he tied for fifth at the Vermont Open and tied for eighth at the Greater Bangor Open.

All of which set the stage for the Wyndham Championship pre-qualifier at Bermuda Run Country Club’s East Course. Widener shot 68 there to play his way into the Monday qualifier, where he fired a 66 and secured a spot in the annual PGA Tour event in the city where Widener grew up.

“Getting to play in the Wyndham was pretty special,” he said.

When it came time to pick a caddie, Widener turned to John Calarco, a former captain of the UNC-W golf team, who Widener has known for years and even coached for a while. “John has been a really good friend and we have a great relationship,” Widener said. “He’s just a wonderful person.”

Calarco said Widener’s round in Wyndham’s Monday qualifier was, “by far, the best ball-striking round of golf I’ve ever seen in my entire life.”

“My only job was reading the grain on the greens and reading putts,” Calarco said. “He didn’t need my help. He’s such an elite player and ball striker. His precision is just amazing. It’s really like a machine. And his short game is just as good, if not better. Every element of his game is so impressive from the driver to the putter. There’s not an area of weakness in there at all.”

Widener said he felt comfortable, relatively relaxed and ready to play golf heading into his opening round of the Wyndham Championship. Former collegiate competitors Bob Estes and Dicky Pride warmly greeted him on the driving range. Widener had been an assistant coach at Duke when Kevin Streelman was a senior and he also helped recruit Ryan Baum, so he was able to catch up with both of those competitors.

Widener and Padraig Harrington were rookies together in Europe. “It was nice to say hello,” Widener said. “I probably hadn’t seen him since 1996.

“I wouldn’t say (the tournament atmosphere) was overwhelming in any way,” he said. “I felt good.”

Calarco felt like his man was ready to compete, noting that the only perceptible difference between Widener and the other Tour pros on the range was that Widener might have been even more consistent. “Jason was in beautiful rhythm heading into the first round,” Calarco said. “It was fun to see him put into play and practice what I had heard about for all those years.

“I would say his ball striking is just as good if not better than a lot of players I saw on the driving range. I knew there was no doubt in my mind he could compete at that level.”

In Thursday’s opening-round, battling oppressive heat and humidity — not to mention numerous tour regulars who were battling to reach the FedEx Cup playoffs — Widener grinded through the day, not swinging the club his best and not making many putts. Nevertheless, he stepped to the 18th tee box at even par, before his worst swing of the week sailed out of bounds right, the miss-fire eventually resulting in a triple bogey.

In Friday’s second round, Widener was swinging more in rhythm and despite Sedgefield Country Club greens that were firmer and faster than the day before, he managed a 2-under 68.

Even though he missed the cut in his first PGA Tour event, Widener took solace knowing that — had he avoided the triple bogey on Thursday and managed one more birdie — he might have been playing on the weekend.

“It was still a great experience,” he said. “All things considered I was happy with my performance.”

Widener, who lives in Chapel Hill with his wife, Hannah, and their two teenage daughters, grew up playing The Cardinal (now Sedgefield CC Dye Course) in Greensboro and his mother even worked at Sedgefield for a while, so Widener was encouraged by the wide support of the Greensboro community throughout the week.

“One of the coolest things was seeing so many old friends who came out to see me play, not to mention the tournament staff and volunteers,” he said. “I saw old classmates from Northwest Guilford (where he graduated in 1989) and even back to Colfax Elementary School. A marshal on the 15th hole told me he had officiated some of my matches in high school and had followed my career. All of that was really neat.”

Calarco, who caddied in the 2005 U.S. Open in Pinehurst for a former college teammate, said he doesn’t know what the future holds for Widener, but added that whatever Widener decides to do moving forward he’ll always consider him a champion.

“Our relationship has been really, really special,” Calarco said. “He’s been an incredible mentor to me. I’ve learned so much about golf, and the swing and how the game is played and all these different approaches to it, but I’ve learned more about life and being a caring and compassionate person, and how important it is to continue to maintain good, healthy relationships with people. He’s just an amazing person. Our friendship is very much a blessing to me.”

Widener — who dove into martial arts when he stopped travelling and competing years ago, and through the years has practiced and taught college courses in both Aikido and Tai Chi — has stayed physically fit. He said he plans to continue to consult with his coach, Larry George, the director of golf at River Landing in Wallace, while he decides what steps to take next in his rejuvenated playing career.

“The exact plans I’m still working on,” he said. “I feel like my game is in a good place right now. Larry and I will continue trying to figure out what the best, next step is on this path. I’m planning to continue to compete and keep getting better — see what I can do with it.”