Joy, Rockingham County come away with 3-A hardware 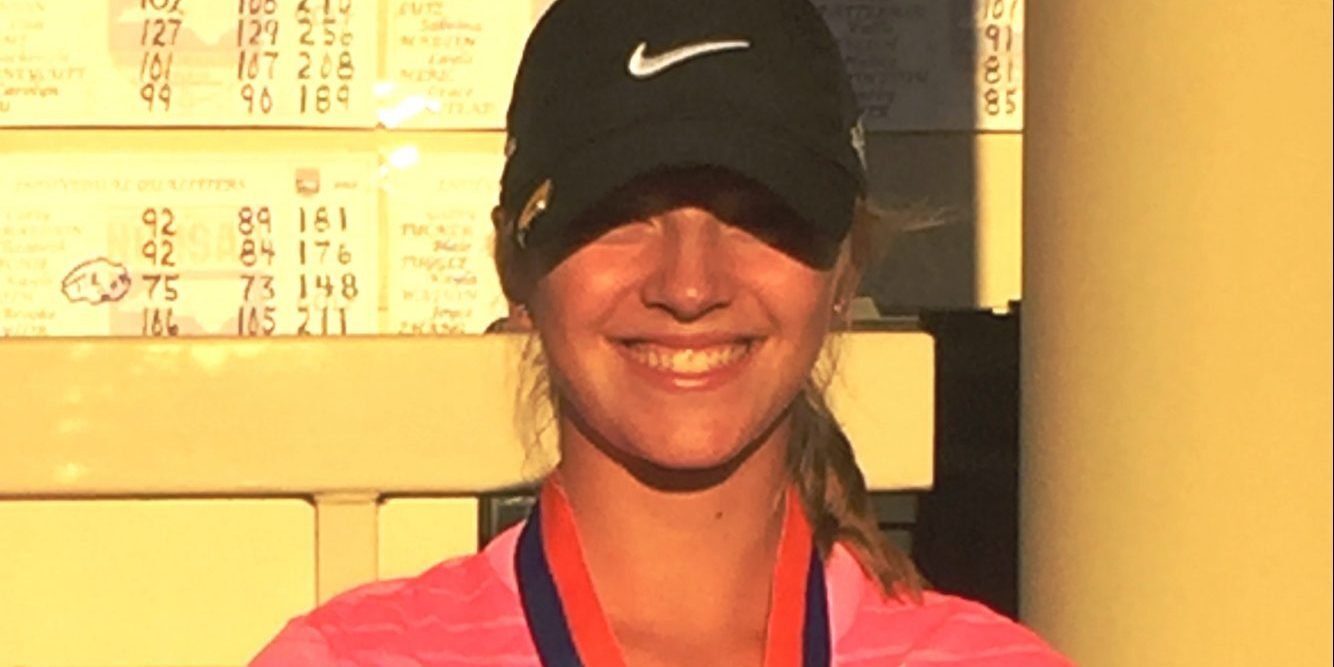 Hailey Joy overcame her nerves to win the 3-A state golf championship and lead Rockingham County to its third straight title.

Joy, a senior, opened with the best round of the tournament, a 3-under 69, at Foxfire Resort & Golf Club. She struggled to a 76 in the final round for a 145 total but still won by three shots.

“I was little disappointed in how I played, but I was really nervous,” Joy admitted. “So, I’m going to give myself a pass. I’ve only had the lead overnight a few times this summer, so I really haven’t gotten used to it. I was just trying keep it under control.”

“The first round, I really didn’t set any expectations for myself score-wise. I just tried to play steady to give my team a good lead after the first day.”

Chapel Hill’s Gina Kim, one of the nation’s top junior players who is headed to Duke, did not compete in the high school tournament this year.

Kim’s absence opened the door for a new champion this year. She had won the 3-A title two years in a row. Her coach, Ed Ibarguen, the director of golf at Duke University Golf Club, said Kim decided to take off the high school season because of the busy summer schedule she played. She competed in AJGA tournaments, the Junior Ryder Cup and even qualified for an LPGA tournament.

“Her summer schedule was insane,” he said. “Coming into the high school season, she was tired. Her parents and I discussed if she was going to be able to do her school work and still play golf. We and Gina decided she should not play high school golf.”

Joy had a four-shot lead after the first round and was firmly in control after shooting 1-under on the front nine in Day 2. But her nervousness began to show as she shot 41 on the back nine, including a double bogey on the last hole. The second round was played under lift, clean and place conditions after heavy overnight rain.

Joy, who has committed to play golf at UNC Greensboro next year, still finished three strokes ahead of Kayla Smith of Burlington Williams and Katharina Floyd of Pittsboro Northwood, who tied for second for the second straight year. They both shot 148.

“I’ve always watched some really good girls win the state and to be a part of that group now means a lot to me,” Joy said.

Rockingham County coach Mike Williams said of Joy’s round of 69, “That was amazing. She had a 3-putt so it could have been a little bit lower but tee-to-green, she’s tough.”

“This proves that hard work and determination will pay off,” Williams said of his team’s title run.

The Cougars shot 227 in the first round to open a 22-shot lead over Northern Guilford. Joy said the team was afraid something might go wrong overnight.

But no calamity befell the Cougars and they continued to pour it on in the second round, outscoring Northern Guilford 228 to 242, for a 36-shot win.

“I am glad I can end my senior year with a third one,” said John, who will play golf at Western Carolina next year. “We had a 22-stroke lead and that gave us confidence to relax.”

Joy said, “Three straight team titles is a memory I will not forget.”

Cook, a sophomore, will become the team leader next year when the Cougars try to win their fourth straight title.

“I think we’ll be good next year, still strong like we are now,” she said. “Being the leader next year, it’s going to feel really different.”

Williams is optimistic the team can keep its winning streak going.

“We’re losing two seniors, but we’ll still be pretty good next year,” he said. “We’ve got a couple of good freshmen coming in, so we should be competitive. Winning kind of breeds winning. The girls at the middle school are excited about it. They’re all going to get lessons now.”

Smith shot 75-73 to finish three shots behind Joy. Smith was six behind after the first round and was still in contention after a 1-under 35 on the front nine the second day. But she was derailed by a double bogey on the par-4 11th hole.

“I wasn’t hitting the ball as well as I wanted to but I ended up managing pretty well,” she said. “I hit a wall for a little bit but then I tried to get back in my swing, found the rhythm and started functioning better.”

Smith, a junior, was part of a Burlington Williams team that finished second 25 shots behind Rockingham County last year. But the Bulldogs didn’t make it to the state tournament this year.

First-year coach Caroline Crow said, “Kayla wasn’t particularly challenged in the county or the conference but stayed motivated by competing against herself and trying to improve her score every week. She’s her own motivator, her own competitor.”

For Northern Guilford, it was another runner-up finish behind the Cougars. The Nighthawks finished second in the conference and at the East Central Regional behind Rockingham County.

“Ladd has been getting better every year,” Bonham said. “She’s worked very hard on her game. She’s turned the corner on it. She knows how to play and can get on the course and separate playing golf from playing golf swing. She knows when she doesn’t have her best day, how to get it in the hole. Mentally, she’s probably one of the strongest players that I have ever coached.”

Ladd, a junior, returns along with Wong and Cami Rivas, who shot 190 at the state tournament. The nucleus gives Bonham hope the Nighthawks might be able to end Rockingham County’s streak next year.

“Northern is a great team,” Williams said. “I mean, they pushed us all year long and made us better.”

But first, Williams is celebrating another title after winning the first one in 2015 by five shots over Lee County.

“I’m so happy for the kids and for Hailey, too,” he said. “Olivia won the regional championship. They’ve been solid all year long. It’s a great accomplishment. I’m proud to be their coach. They have good attitudes and all of them are exemplary students. I just feel like I’m the luckiest coach in the world.”