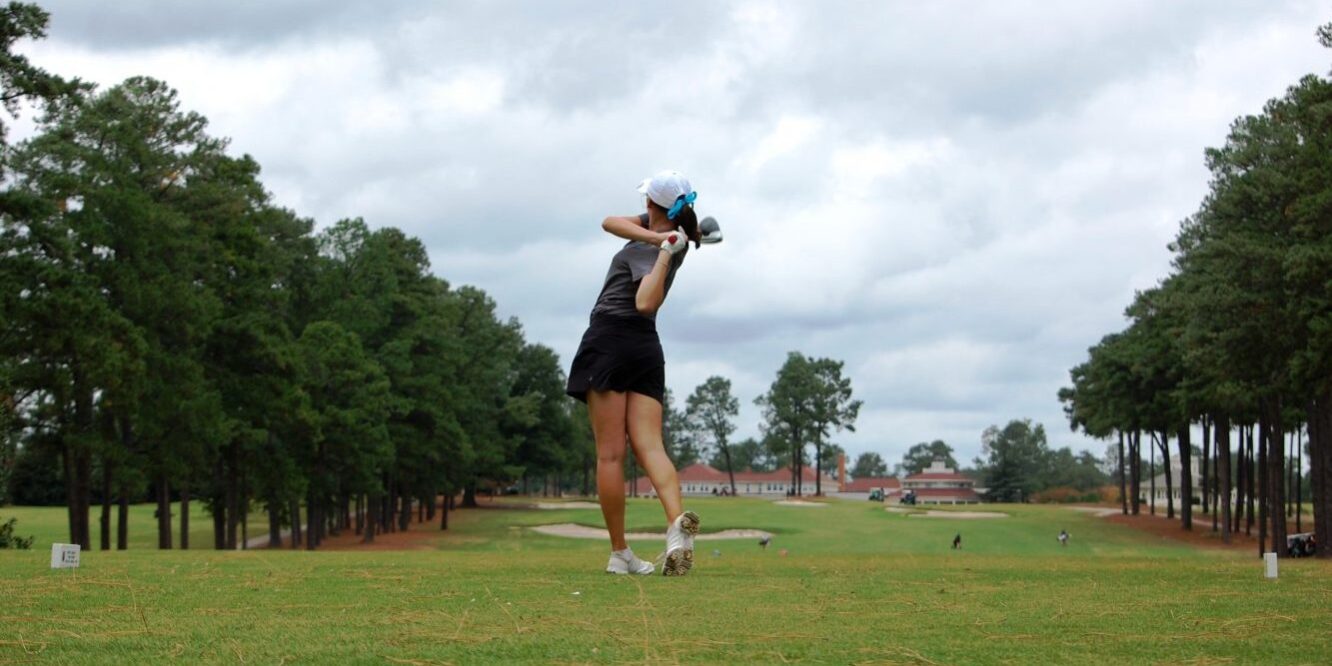 Jennifer Chang chuckles when she looks back at her freshmen photos as a young teenage golfer at Athens Drive High School in Raleigh.

“It’s hard to imagine that was me,” she said.

At the time, Chang was a talented junior player, but few knew what a remarkable future awaited the 15-year-old.

Four years have passed and Chang will soon be heading off to the West Coast for a college golf career at powerhouse Southern Cal after graduating early from high school. She leaves behind arguably the greatest feat in North Carolina prep sports history – winning four straight 4-A golf titles.

Chang capped off her four-peat in dominating fashion in late October at Pinehurst No. 1, winning this year’s championship by seven shots. Her first-round 69 was the only sub-70 round in the field of 78 golfers.

“In the back of my mind there was that thought that I was trying to win four straight, but I didn’t want to put myself in an uncomfortable situation, so I just treated it like any other tournament. I relaxed and did some homework,” Chang said of her overnight stay at Pine Needles Resort between rounds one and two.

She woke up the next day and carded a 70 – three shots better than any other golfer that day – to finish at 5-under. Her goal of carding a birdie on her final high school hole didn’t come to pass, but it was an emotional setting as she approached the green, which was ringed with her competitors to help her celebrate a feat that will likely never be matched.

“The most memorable thing of all of my wins was the last hole this year, seeing everyone I’ve played with since my freshmen year and all the new players and seeing my team up there,” she said.

“There was nobody around her at the end and I just walked up to her and said, ‘You are just overly impressive and everything you do moving forward is almost like icing on the cake,”’ said rival coach Greg Greksa, whose Cardinal Gibbons team captured the state title.  “She is very approachable, just a good young lady. And I believe a lot of people are going to look up to her for more than just her impressive golf play.”

Cardinal Gibbons captured its second state 4-A title in the last three years, beating out Pinecrest by seven shots after holding a five-shot lead after the first round.

The victory was accomplished without the team’s No. 1 player – University of Virginia signee Riley Smyth – who sat out the season with a hip injury. Megan Kanaby led the way for the Crusaders, finishing at 5-over to tie for third place, but she was not alone as all four golfers had scores count during the two-day event.

“It’s a pretty awesome feeling, winning it again,” Greksa said. “One of the coolest things for us is the girls feel like this is the time they really work together as a team. People always say golf is an individual sport, but at the end of the day it’s the three best scores that count, so among themselves they have a fun, fair competition. They say, ‘We’re all good players so let’s see whose scores are going to count toward our total.’ Everybody’s score counted at least one of the days so that’s pretty cool, that everybody contributed.”

Meanwhile, Reagan came in fourth behind Gibbons, Pinecrest and Athens Drive – 40 shots off the pace. Sasha Hayes tied for eighth with rounds of 78 and 77. Reagan had no other golfer in the top 25.

“We tried some different things this year and felt the team was loose going into states but we did not perform up to the level I expected the first day, but Cardinal Gibbons and Pinecrest both had five players so we could not have an off player with only three girls,” said coach Jay Allred, who has won nine conference championships at the school in 11 years. “Sasha Hayes was paired with Jennifer Chang and had it to within one stroke after 10 but Jennifer hit the accelerator at that point. The second day, I thought we performed up to the level I expected and played very well. I always try to tell these girls don’t worry about what place you are finishing, just enjoy the experience.”

Chang’s final three prep tournaments were truly remarkable – a combined 19 under par. She shot a state record-breaking 61 at the conference finals at Pine Hollow in Clayton, where the pace of play was so slow that she was able to read three chapters of homework on the back nine and still set the course record. That was followed by a 68 at the East Regional in New Bern, and then her fourth state crown in runaway fashion.

“This season has probably been my most solid season ever,” Chang said.

“In today’s junior golf environment and with it being so competitive it takes a very special person to accomplish what Jenny has accomplished,” said Ben Hynson, Chang’s golf instructor at Lochmere Golf Club in Cary. “Her unwavering desire to improve her all around game has made her a joy to coach. Her ability to stay in the present and play one shot at a time and not get ahead of herself has allowed her to become more consistent and not make as many mistakes. In years past, she would let a bad shot or bad hole stay with her and have an affect on her ability to play better.”

Hynson said a big part of Chang’s success has been a physical conditioning program she started last October and the addition of a mental coach to her team.

“Those things have made her a more complete player,” he said.

Chang has won her state titles in varying fashion – as a young, innocent freshman in 2014, coming from three shots back in horrible weather conditions in 2015, by the narrow margin of one shot in 2016, and then this year’s romp.

“Coming into high school golf my goal was to win one state championship,” she said. “When I won my first one I said, ‘OK, next year let’s go for another one.’ And then once I won three I wanted to end on a good note, winning a fourth one. Sure, this year there was a cushion, but golf isn’t over until it’s over. Once I signed my scorecard that’s when I knew it was official.

“My mental game has contributed a huge part, that’s that part that really drove me to shoot what I can and be capable of shooting what I can,” Chang added. “Just being able to overcome the negative thoughts and kind of set myself into neutral because it’s hard for a golfer to go from a negative to a positive, so try to keep it in neutral.”

Chang said she is more excited than nervous to head to Southern Cal.

“It’s a new chapter in my life that I’m looking forward to. I know high school golf is totally different from college golf. There is more competition, people playing at your level so it’s definitely exciting.”

Few have been able to play at Chang’s level so far.

“It has been a lot of fun to watch her,” Greksa said. “She has proven to be a marquee player. I always say people don’t understand that golf is the most difficult sport there is, and for her to do what she did four years in absolutely amazing, it’s not really plausible.”